Review of: Nina Conti: In Your Face

Extraordinary ventriloquist Nina Conti creates absurd comic brilliance using her audience as her puppets, experimenting with the formal conventions of her art as she goes.

Nina Conti is utterly unique on the British comedy scene. Before Conti, the idea of a popular ventriloquism act appearing on Live at the Apollo and selling out the Edinburgh Fringe would have been laughable. The reality is also laughable – riotously so. Welcome to the New Vaudeville – alternative comedy branching out not just beyond styles of stand up but the constraints of the form.

For beyond her talents as a ventriloquist, Conti is an excellent stand-up comedian with a skill for spontaneity. Where her material strays into the more commonplace territory of stand-up comedy, such as asking audience members what their professions are, her repartee with her sidekick monkey puppet ‘Monk’ adds an extra dimension which allows her to subvert the more contrived elements of her act. For other comedians, this comic goldmine would be enough. But Conti is a true innovator of form, and in the Monk sequences which piece together the main event she daringly stretches the logic of this double act, producing dazzling results. 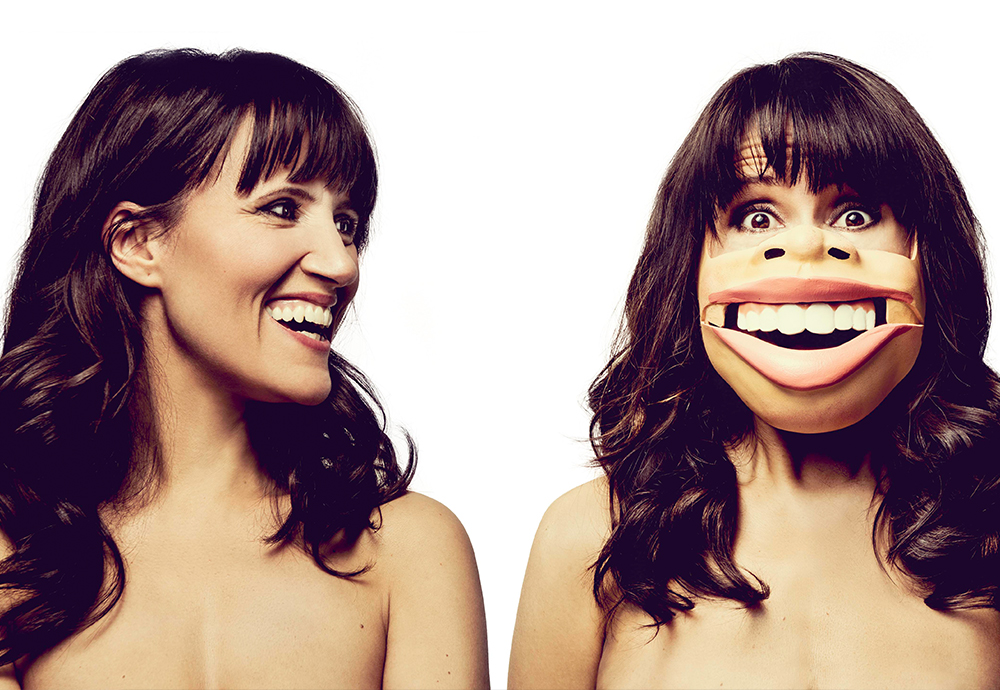 Monk, however, is the sidekick to the centrepiece of In Your Face – the masks that Conti uses to turn her audience into her puppets. Conti has been experimenting with this technique  for a number of years, but until now they have played second-fiddle to her more easily-controlled counterparts. In the first half, these masks produced a pair of double acts – dialogues double-voiced by the versatile Conti, but in which the physicality of audience-puppet provides unpredictability. The difficulties of this dynamic and Conti’s efforts to sustain its logic lead to moments of sublime absurdity – particularly hilarious was an audience member’s attempts to explain through mime (and Conti’s voice) a form of software that the comedian was completely unfamiliar with. If this sounds like (as Monk puts it) the work of a “control freak”, then it is to neglect the sensitivity Conti brings to these interactions which make them feel like a genuine double act. Conti may be providing the entire script on the spot, but the success of this spontaneity relies on the audience-puppet’s willingness to play. It is something shared, and the fun is infectious. When an audience member with stage fright hugs Conti after being released, the warmth is infectious too.

In the second half, Conti engineers a Q/A with Monk which effectively enlists the audience members most likely to shout out (normally the comedian’s nightmare) as her ‘volunteers.’ And here comes the real challenge, with the number of audience-puppets onstage gradually growing to six, all with their own voices and personalities which feel drawn from a combination of that volunteer’s mask and their reaction to it. Here, the sheer plate-spinning required of Conti mean the focus shifts to improvising around the sparse details she learned about her cast from the Q/A, and less moments feel utterly organic. However, it is easy to forget this is one woman, maintaining an entirely improvised and utterly entertaining six (seven including herself) character comic routine. And this is the greatest compliment I can pay to this artist – that it is all too easy to forget her astonishing skill, and only see Conti in her role as the baffled, polite compère and not in her foul-mouthed, brilliant creations. They have a life of their own.

In Your Face tours the UK until the 30th of November, before touring New York. Full tour details here.