Review of: Moby Dick the Musical at the Union Theatre

A bemusing version of Moby Dick reproduced by a fantastic cast.

Moby Dick the Musical is a strange one. An anarchic, bombastic piece of meta theatre that will perpetually be overshadowed by its own ambitions (to replicate the exhaustive Melville novel in all its glory), it’s a dense, muddy affair that can at times get lost in its own conceptual chaos. As such, the lot of the reviewer is here called into question – do I congratulate an incredibly well co-ordinated, exuberant and well-drilled cast, or critique the fact that the play was salvaged from the sea of obscurity for its 25th anniversary.

Indeed, Robert Longden and Hereward Kaye have conjured up a packed out piece of musical theatre, hopping between numbers at a breakneck speed. The characters, each ‘played’ by members of an all-girls St. Godley’s Academy (on the brink of financial ruin, desperate to salvage some form of income), are larger than life, each jostling for space in Southwark’s Union Theatre. We see the tragic tale of Captain Ahab played out with a remarkable and almost unsatisfying pace, never giving us the opportunity to either register the hilarious notion of the characters or emotional pain of Ahab’s life. The whole thing seems to sail along without direction at times, before abruptly reaching an anti-climactic finish. 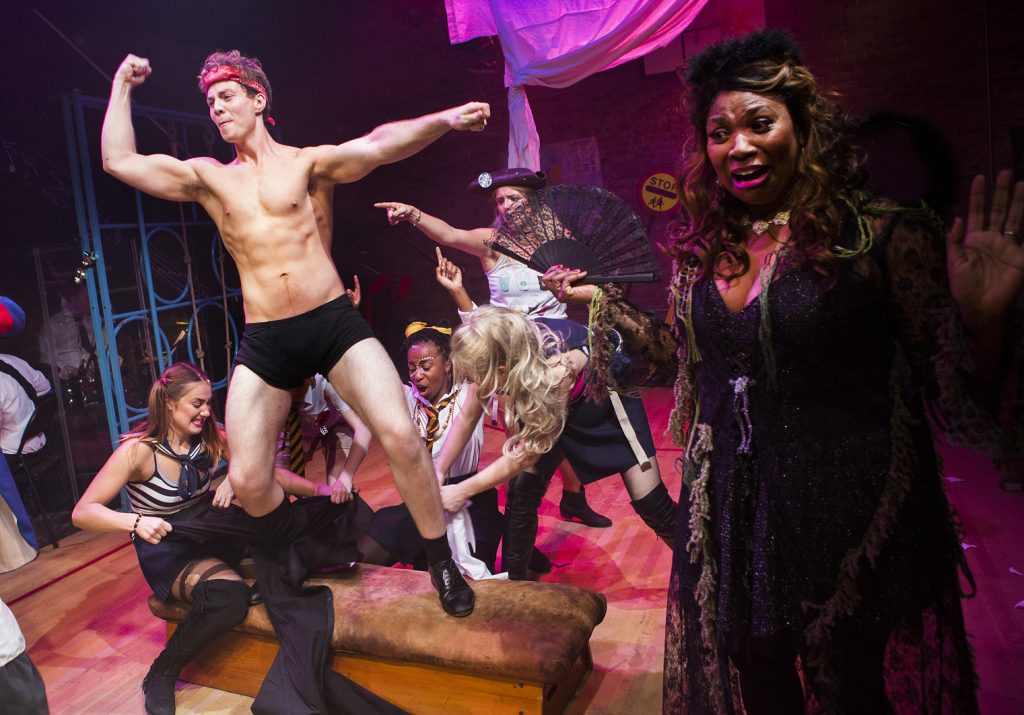 For all this frantic lack of direction, almost every other element of the show has to be commended for its bountiful expression of joy and humour. The cast are stellar, hitting almost every note with unfailing consistency, executing some wonderful choreography. It’s incredibly telling that Andrew Wright functioned as both director and choreographer, slathering the production in ceaseless movement and blocking. This was an exhausting show with some standout performances – Anton Stephans cuts through the mayhem with a dignified and humorous poise, while Brenda Edwards effortlessly steals her own scenes. The ‘girls’ that made up the ensemble were a fluid bunch of performers, many of whom that will have bright and exciting futures ahead of them. Set design from Anna Kelsey was exciting and flexible in such a small space, a believable nautical experience conjured from mundane school based objects.

A strange mix, therefore, of a rather sloppy musical mixed with an incredibly talented cast. This is a frustrating set of circumstances – almost any other musical would have been a perfect event. Instead the show ends up settling as something almost in limbo – a fazing, contradictory experience. If you’re a fan of Moby Dick then it may be for you – I was left more unsatisfied, desiring the company to do more.