For most theatres, a major refurbishment would mean a reduction of work and certainly output. However, whilst The Tricycle Theatre undergoes its £5.5 million transformation, it is simultaneously launching its largest ever Creative Learning project – vastly expanding its work with young people in local communities.

The Tricycle Theatre has previously run a young company, which annually takes over the venue for a week long theatre festival. However, ‘Mapping Brent’ will see the most ambitious Tricycle Takeover to date, with the formation of six companies across the borough performing in six satellite venues. Among these companies is the Tricycle’s first Minding The Gap Young Company, based on the Tricycle’s creative learning project that works with young refugees, asylum seekers and migrants. Another one of the companies is the Tricycle Community Company, which brings together a group of actors from age nineteen to seventy-one and celebrates creative learning at all ages. 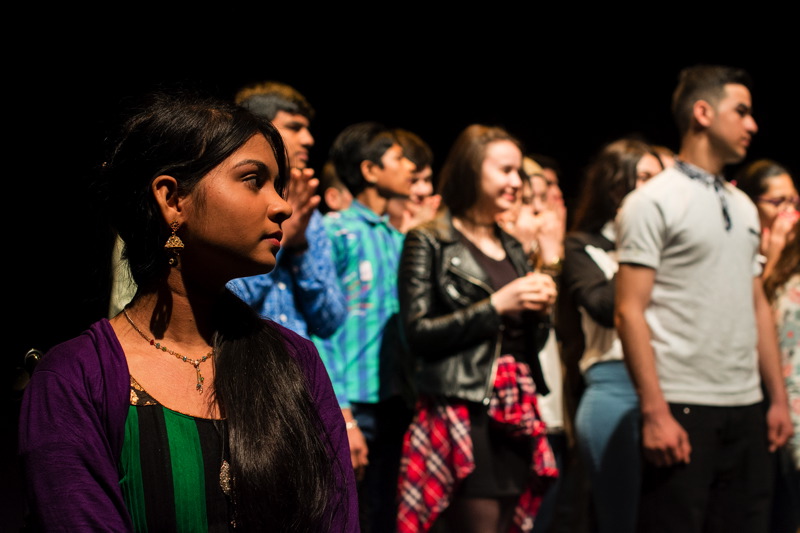 Minding The Gap at the Tricycle Theatre

For Young Producer Juliana Ayeni-Stevens, this project is “not just about young people, it’s about bringing a community together.” The different groups will be encouraged to attend workshops and performances not only in their own area, but also in the areas of the other groups. The aim is for these new-formed communities to join that of the Tricycle Theatre itself once it reopens.

Mapping Brent is not only providing fantastic opportunities for young people without access to theatre – for the graduates who are this year’s Young Producers, it is a vital training for their craft and a chance to begin their careers. With seminars from professionals working at the Tricycle, the Young Producer scheme is a hands-on education in how to create your own work. Many previous Young Producers from the Tricycle Takeover project are now working professionally in the industry.

For Artistic Director Indhu Rubasingham, schemes such as the young company and the annual takeover are part of “a commitment to work with young people from across Brent, engage with people in their community and to form lasting relationships.”  Directors, actors and even a current member of the board at the theatre were once members of the Tricycle young company.

According to Creative Learning Director Liam Shea, the greatest challenge is in engaging groups who are less inclined to get involved in theatre for the very reason that they have not had access to such positive opportunities before. In many cases, this means challenging assumptions of what theatre can be – the Stonebridge team engaged with their group in the first session with shadow puppetry and object manipulation. For Shea, the projects aim to both give a voice to the stories of young people, whilst giving them the experience of professional practice and the tools they will use to tell those stories. The devising methods for these pieces will be as disparate as the groups themselves – some involve writers, creating stories with characters devised by the youth actors. For the Minding The Gap Youth Company, for many of whom English is not a first language, the focus will be on exploring alternative devising techniques without an emphasis on language.

Beginning this month, the six companies will develop their pieces across twenty sessions, performing in Spring 2017.