What many people have come to know as ‘Hamilton’s younger sibling’, In The Heights is finally drawing to a close at the King’s Cross Theatre after a successful run of more than a year. Featuring a heady mix of rap, salsa and everything in-between, the musical lauds itself as ‘different from everything else around’ – a claim that is certainly true in terms of the musical style and skills that prop up the production, but less certain in terms of a plot that feels like a cross between West Side Story and RENT. 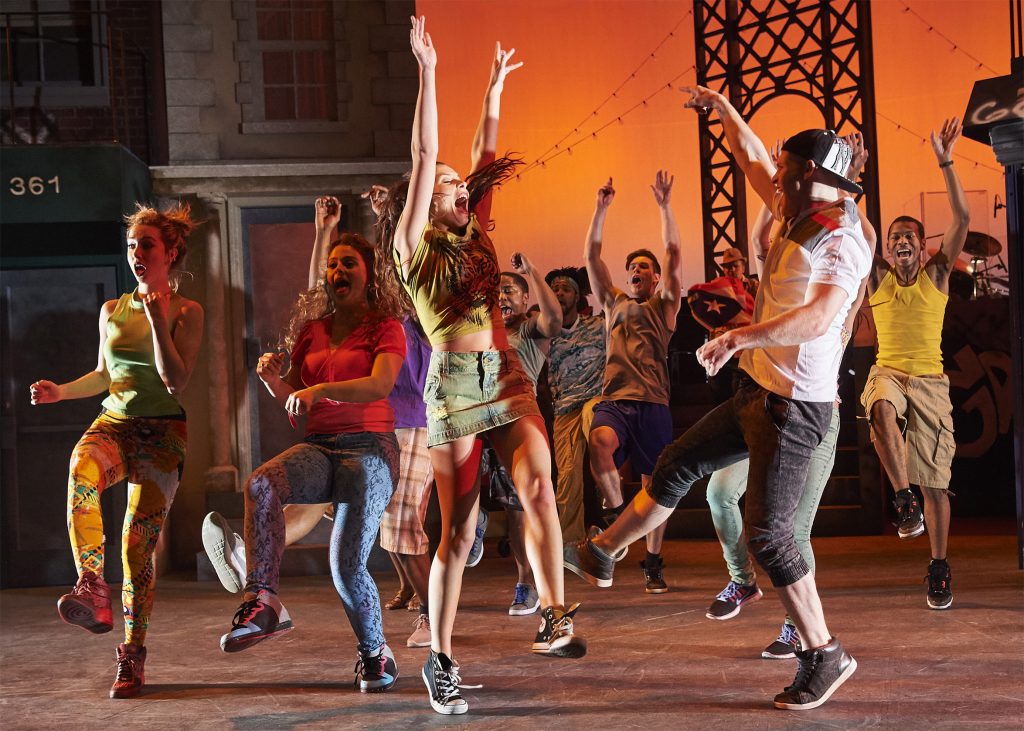 However, when considering that the first performance of this piece was way back in 2000 by a student theatre company of Wesleyan University, most if not all of these misgivings can be forgiven. The magic of In the Heights, unlike most other musicals in the West End at the moment, is that it discusses a modern world with music styles that reflect that modernity, bringing in issues such as gentrification and class which I haven’t really seen since Billy Elliot built a world in the context of the British miner’s strike. Kinky Boots is potentially the closest comparison in the West End today, but then only because of the relevance of the narrative, and not necessarily the musical style with which this is told. As Juliet Gough, playing Nina’s mother Camila, told us, ‘It attracts a very different audience’ – an audience who want to be involved, and whom the traverse staging speaks to as the onstage and auditorium world become much more intertwined than the traditional West End proscenium arch.

Of course, there are some aspects of In The Heights that do cater towards the musical norm, the most obvious one of these including the very cliche triad of girls which manage to permeate most corners of society – the beautiful ‘love interest’ (Vanessa) the ‘sassy, feisty one’ (Daniela) and the one whose purpose it is to be stupid and be laughed at (Carla). These can be found everywhere in Western culture, from West Side Story (Maria, Anita and Consuela) to teen movies such as Mean Girls, Grease; the trope goes on and on. It does annoy me that in a musical so dedicated to stirring up the norm the writer Lin-Manuel Miranda decides to fall back on this outdated stereotype – although elsewhere he disrupts typical dynamics of gender representation, with mother Camila demanding a voice within the father/daughter family conflict.

However, the most impressive thing about In The Heights is the way it interrogates the form and style of musical theatre. There is a very distinctive musical theatre ‘style’, the way songs and recits are written which has existed for a long time and seems to be slightly bogged down in what it expects audiences to ‘like’. Lin-Manuel Miranda and people such as Tim Minchin both rebel against this; Minchin in the organisation and style of his lyrics, which arguably feature more prominently than the score, and Miranda in the completely different genres of music he chooses and fuses. Both produce music which is interesting both aurally and academically, and can sustain interest beyond their pure entertainment factor.

It is nonetheless slightly odd seeing something like In The Heights (and predictably Hamilton) in the West End just because they are so particularly American. In The Heights deals with an American neighbourhood, American problems and issues that do have parallels to struggles British communities face, but do not reflect them exactly. After having spent an hour pretending to have an American accent, Sam Mackay (playing Usnavi) revealed that he is from North London, an area which faces many of the issues addressed in In The Heights and yet has not reached the attention of mainstream musical entertainment. I find it odd that so many people flock to see these sort of transfers and yet the West End has not yet reached that stage where it can put English musicals of a similar ilk onstage. My hope is that the biggest influence In The Heights and the incoming transfer of Hamilton will have is to inspire British producers and composers to create work which reflects modern British music and society in the West End, and prevent it from becoming a receiving-ground for expressions of the American Dream.

In The Heights is accepting bookings until 8th January 2017. Further details here.