Al Smith turned heads at this year’s Edinburgh Festival with his fiery, gripping adaptation of Gogol’s Diary Of A Madman. Now, Richard Twyman’s critically-acclaimed production of Smith’s two-hander  Harrogate, which first ran at the 2015 HighTide Festival, has returned, running briefly at the Royal Court before a national tour. It remains a compellingly elusive play, slickly staged and devastatingly powerful.

Nigel Lindsay steps into Nick Sidi’s shoes as an ageing, arms-folded, ex-alpha male – the kind of man who phrases questions as statements. Sarah Ridgeway reprises her enigmatic performance as the three women in his life: his cleaner, his daughter, and his wife. Not that as much is obvious, even by the show’s conclusion. Smith’s writing is deliciously slippery throughout, swerving and veering from false assumption to false assumption. One is never sure exactly who conversations are taking place between, or whether they are taking place at all. The audience is always playing catch-up.

All that can be said with certainty is that Lindsay’s father-figure has a squeamishly close relationship with his fifteen year-old daughter, that he and his wife are far from married bliss, and that he is febrile and torn about the whole thing. Over the course of three superbly developed conversations, Smith explores the darkest recesses of the father’s mind, prodding, poking and turning over rocks until his soul is exposed in a chillingly fitting conclusion. 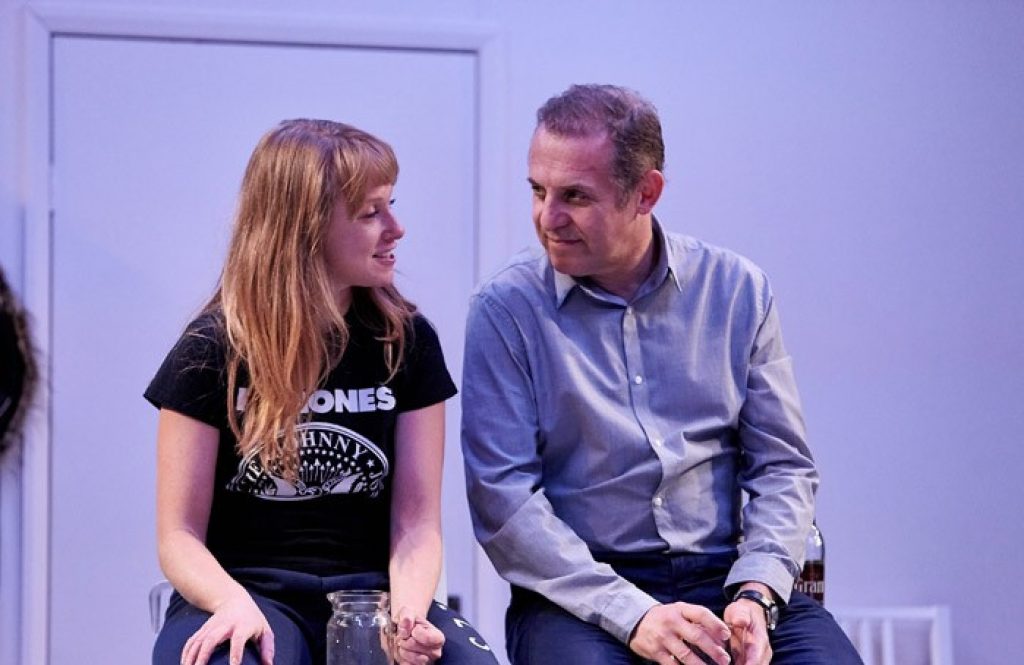 Both Lindsay and Ridgeway are perfectly cast. Ridgeway has the enviable ability to play a girl of fifteen and a mother of 40-something and make both seem utterly convincing. Her hair-twirling, Bailey’s-swilling, swift-texting teenager is a cocktail of nascent sexuality and childish innocence. Her middle-aged mum is a world-wearied wreck, painfully aware of the failures in her marriage but determined to stick it out with a black humour and a glass of whiskey. Lindsay is equally impressive, calm and considered but clearly vulnerable to the end.

Twyman’s direction is careful and precise on Tom Piper’s sterile, white, open-plan set. But the real star here is Smith. His searing dialogue zings back and forth, leading the audience down the garden path and back again, barely disguising the myriad turbulent emotions bubbling beneath the service. It’s almost Pineter-esque at points: monosyllabic but infinitely articulate, and occasionally breaking into cryptic, gut-wrenchingly moving parables.

It’s an enormous shame that Harrogate is only running at the Jerwood Upstairs for less than a fortnight before its short National tour. Such absorbing, intelligent new writing deserves a much wider exposure. Catch it if you can – just don’t bring your daughter along.

Twelfth Night will be continuing its run at the Royal Court at 19:45 until 29th October. You can book your tickets from 020 7565 5000 or http://www.royalcourttheatre.com/whats-on/harrogate/?tab=1