Review of: Girls at the Soho Theatre

An electric, emotional, powerful masterpiece; Ismail brings a gritty tale to life, by overlaying the stark setting with the mesmerising energy of the three actors.

Theresa Ikoko’s Girls, directed by Elayce Ismail at Soho Theatre, is nothing short of chokingly moving – a play that delicately landed. The quick shot dialogue, effective staging and spectacular gravity brought by the three cast members set Girls soaring into the heights of modern classic. 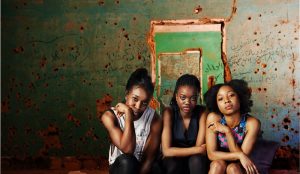 The play centres on Haleema (Anita Joy Uwajeh), Ruhab (Yvette Boakye) and Tisana (Abiola Ogunbiyi), three young woman who have been kidnapped by an Islamic extremist group, and face an uncertain fate. Each character reacts in their own way – Halle fights back, Ruhab adapts as best she can and little Tisana tries to turn it into make believe. All are powerful but up against something indestructible, annd each actor crafts this underlying motive into their physicality.

The staging is claustrophobic, with blurred silhouettes in the background, a constant reminder that however the girls are acting, they are not alone and they are not free. The limited space is electrified with eerie non diegetic murmurs, played over scene transitions, and variation brought by different props that the women moved around, and the levels they bring with their frenetic movements. The play is tremendously lively; the dialogue is fiery and whip-fast, the movements are reactive and large, and the imagined games of the girls, as well as their hilarious impressions, are uproariously funny.

The friendship of the girls is at the forefront of the performance; laughter is king, and the reality of their situation flitters through only when they can no longer hold it back. The play opens with them teasing each other; chattering away about love and sex. It is only when Tisana starts talking about how hungry she is that it becomes clear that something is wrong. It is immediately evened out by Ruhab saying, “Carbs… You know how many calories is in one portion of – this is the best you’ve ever looked, let me be honest with you.” The actor’s control, and understanding of tension, upholds the weight of the play.

It is in this way that the horror of the situation is balanced with the warmth of the girls. They protect each other, tease each other, comfort each other. The chronology of the scenes lends itself – while the location is static, the tension ranges from screaming arguments to dealing with trauma to watching imaginary televeision together. It is the versatility of the actors which fires the play – we believe them, so we are moved by them.

With Girls, Ikoko unapologetically brings the once hyped, much forgotten reality of the missing Nigerian girls taken from their home in Chibok in 2014. While the world was in outrage, with Michelle Obama heading a “Bring Back Our Girls” campaign, two years on and none have been rescued. Halle vocalises Ikoko’s frustration, “What on earth do you want to do with a hashtag? Can you use it to shoot your way out of here?” early on, then later, “We are old news.” 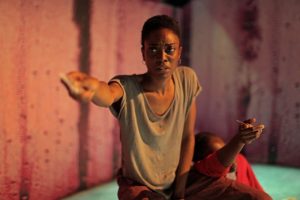 The play is haunted by the expectations of girlhood. At times they discuss menstruation, sex, how a girl should be concerned with her appearence, taking care of herself. But after Rhu remarks that “Mama says girls shouldn’t ride bikes, that I may scrape my knee,” Halle bitterly replies “because that is the worst thing that may happen to you, clearly.” Despite Rhu obeying the rules of feminity, Halle disobeying them, and Tisana not having encountered them, they all end up kidnapped. When asked whether she would have rather given birth to a girl or a boy, Rhu says, “This world is not for girls.”

Tisana, the youngest, is the most physically affected throughout. Her innocence is gone; instead of blushing, she asks for detail about the sex that she knows is in store for her. She cannot process it, alternating between imagining a bright future, (the newsreader announces, “The data is in, and Tisana is in fact, officially, the prettiest girl on the continent.”) and breaking – clutching her face and screaming. In the final scene, Ikoko lands her final shot; the scene is devastation, and Tisana rushes about, acting as if nothing is happening. Like Tisana, we put on a show of caring, but our efforts are futile; we cannot, or are not, reaching far enough.