Review of: Getting Better Slowly

Not a misery memory, but rather an exploration into the unknown story of assault and battery - from a virus!

A performance laden with reality as the audience is taken on a very personal journey of how one young performer, Adam Pownall was subject to a viral infection, which resulted in himself not only losing the ability to dance and perform but it also took him to the brink of death and despair. However, this piece is not a misery memory, much to the credit of the writer, Nick Wood, but rather an exploration into the unknown story of assault and battery, a true grievous bodily harm tale where the assailant is identified, found guilty but is let off for previous!

It is a moving and absorbing tale to hear delivered without rancor or self pity by Adam himself and Kitty Randle. The audience find their seats with the performers casually chatting on stage, reclining on the various heptagonal shaped mirrored dias’ designed by Kate creating a relaxed feeling almost of familiarity as if popping in to find out how the neighbours were getting on so quite seamlessly the lights lowered and Adam and kitty started to recount how this virus invaded his body, took over his life and temporarily destroyed it. Snapping with high energy from ballet to bar the performers give the impression of a fit, fun existence, moving and chatting against the excellent soundscape designed by Kate Urwin slowly the horror starts as the malevolent GB takes hold.

This virus was presented as a character, physically portrayed with a selection of contemporary dance moves to evoke a grabbing, suffocating, all consuming friend or foe alike. This character was named after the French scientist who first identified the destructive powers of the virus, Guiallane -Barre. – GB. Apart from a range of atmospheric tracks and sounds there was also the presentation of the unseen characters in the piece, patient mum, supportive sister and concerned brother Ryan. Their testimony was powerful as witnesses to the event of a body so debilitated it could no longer speak or breathe for itself. 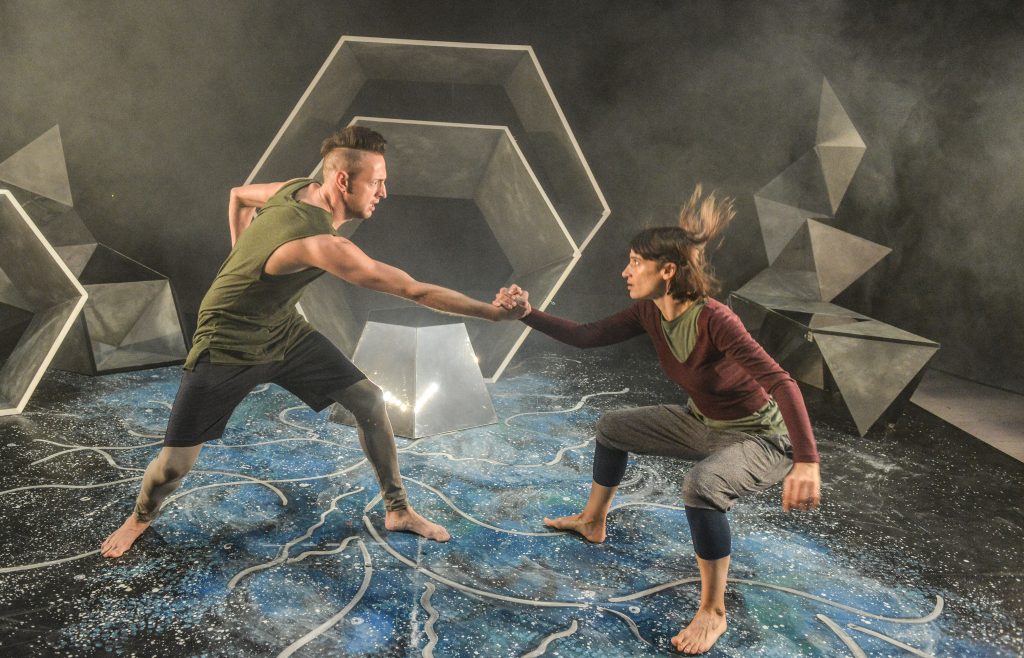 The virus seems to be ever present within the patient but usually not active – until the defenses are lowered by some milder pre-virus – then it strikes like a character from a sci-fi movie. An alien takes hold of you, debilitates you piece by piece, removing you from family and friends, isolating you, weakening you until you can no longer feel even the pins, needles which were once a sign of living and then it holds your life in the balance. Pownall and Handle captured this dark journey with moments of mirth and, most surprisingly, of joy at times. The virus was effectively captured by the dynamic movement, created by Marc Drew and along with coloured and stretched elasticated ropes it allowed the audience to visualize this invisible foe, as the performance area was a maze to navigate. The piece was short, punchy and moved swiftly along, under the able direction of Tilly Branson.

Most patients suffer devastating consequences with only a third of people returning to something of their former selves. Adam’s story is uplifting as he slowly journeys back to a full recovery with the help and support of family and professionals, the physiotherapists and speech therapists – it takes an army of people to rid the body of GB and once the immune system is able to take on the fight it is still an upward struggle. In Adam’s case this was rewarding as he came to dance again and shine his unassuming personality among family and friends once more. A delightfully positive man, telling a delightfully positive story of how you can recover from an assault so great that you imagine there is no future, no normality to be found and yet there is recovery – if only it were for everyone and not just for the lucky few. Or perhaps it is not luck, which is why there is ongoing research driven by the Guiallane -Barre charity.