While beautifully sung and performed and placed in a perfect venue, Floyd Collins struggles under a cumbersome dramatic structure 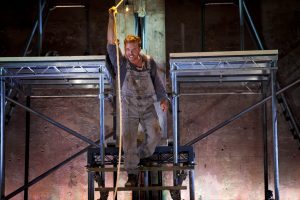 Wilton’s Music Hall is the ideal performance space for the revival of an evocative nostalgia piece such as Floyd Collins. The venue, dating from the mid-19th century, is the oldest continuously operational music hall in the world and well suits a musical based on real events: a caving accident in 1920s Kentucky. While the beautiful, appropriately cavernous space serves this production’s excellent orchestrations and top class vocal performances, the musical itself suffers from unnecessarily slow pacing, no clear dramatic structure, and clumsy lyrics undermining the narrative’s high tragedy.

In defense of Floyd Collins, the events comprising the musical’s focus are not the most obvious choice for a stage production: the titular hero, an intrepid caver, gets trapped by falling rocks when exploring Sand Cave (near Mammoth Caves in rural Kentucky). As his family and the townsfolk try to save Floyd, word of the disaster reaches the outside world. Unfortunately, all of the newspaper coverage and big business money cannot rescue Floyd after a second rockslide cuts off his supplies. Thanks to the prologue, the audience knows how the story ends before its events are set in motion; unfortunately, this takes away much plot tension for anyone previously unfamiliar with the story.

The show originally premiered in New York City for a limited 25-performance run; it has since been revived several times on both sides of the Atlantic. Therefore, it is not entirely this particular production’s fault that the pacing drags and dramatic structure does not capture the audience’s interest to the degree that it should. The plot is painfully slow in the first half – while Floyd is trapped underground there are songs which, which offering insight into other characters, do nothing to further the plot. While it may be argued that these songs show the townsfolk’s initial reluctance to take the missing man’s case seriously, they feel dramatically burdensome. Additionally, the lyrics leave much to be desired; while favouring straightforward, obvious language above poetry suits the setting, occasionally a line clunks and lessens the pathos. While these shortcomings are not the products of this production, the show would have been stronger had they tightened the action and eliminated some of the reprises.

This is not to say that the performers are unskillful; on the contrary, the entire cast – notably Ashley Robinson in the title role, Rebecca Trehearn as his sister Nellie, Sam Thomas as his brother Homer, and Daniel Booroff as the first reporter sent to cover the tragedy – bring impressive vocals and well-drawn characters to the stage. Despite staging limitations in portraying a cave and a rural Kentucky town (that said, the use of scaffolding was ingenious), a sense of place is immediately conveyed by their actions and reactions to each other and the space.

Likewise, the music itself is hauntingly beautiful. A cross between bluegrass, Copeland, and Britten, it is strongly rooted in the time and place while bringing atonal operatic elements to heighten the tale as needed.   It is incredibly difficult music to play, and it is achieved with flair.

While the musical itself may not be the strongest, this production’s excellent orchestrations and vocal performances make it an enjoyable long evening for music aficionados. Additionally, Floyd Collins’s evocative setting is a perfect show for the vintage venue, creating a nostalgic experience that London’s theatre scene may find hard to rival.

Floyd Collins plays at Wilton’s Music Hall until 15th October 2016. Performances are at 7.30pm Monday through Saturday with additional 3.00pm Saturday matinées. Tickets are £23-£32.50 and can be acquired through the venue’s website: http://wiltons.org.uk/.