The Forest Is Dark and Deep

It could be in Kenya,Frankfurt, Delhi, Berlin, Paris or Amsterdam but somewhere out there theatre & theatrical experiences are happening – and in English. Overseas theatre companies, employing both local and UK based actors are delivering a range of dramatic works to a global audience hungry to see the English speaking theatrical canon on stage. The range of work is extensive and is an important part of our national identity abroad.

An interesting occasional look at the theatre overseas might shed light on both how we are viewed abroad and how influential our theatre can be. 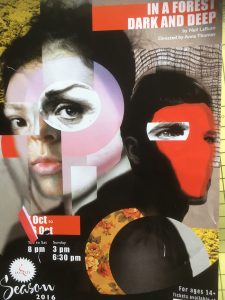 The Forest is Dark and Deep

I imagine you are not necessarily passing through Bangalore in India any time soon – more’s the pity because nestled amidst the hustle and bustle of this burgeoning city, enclosed by trees, and crowded with high rise flats, congested roads and half made pavements, lies a haven of artistry – Jagiti Theatre Company – a theatre empathetically designed for both audience and performers alike to ensure a comfortable and meaningful experience.

‘In a Forest Dark and Deep’ running at Jagriti Theatre, Whitefield.
Directed by Anna Thomas

Owned and managed by Jagiti it is producing arrange of American plays this season along with showcasing some home grown talent too. This story telling hub of Bangalore shines like a gem amidst the clamoring competition of a town shouting for attention.

Playing at the moment is the Neil LaBute’s play, In A Forest Dark and Deep. This two hander moved swiftly along, exposing the long-standing friction between a brother and sister. She asks him over to help clean out a flat she has been renting to one her studensts. The brother less educated, with no fancy degree, he is nevertheless smart and instinctive where she is concerned and quickly smells a rat. He can destabalise her, provoke and cajole her, as he only he knows how and through their bitter exchanges some kind of truth emerges. In some ways it is not as sinister as the play first implies and yet at the same time we are talking about devious, inappropriate and lethal behavior.

This is more than sibling rivalry LaBute is exploring as there a tense understanding between these two misfits that neither seems to be able to replicate with their partners. Clever, professorial, Ash is played by Sunitha and the hapless Sandy, played by Jimmy, both of whom are regular players with the Jugaad Theatre Company. They deliver their lines with pace and brio moving from sibling squabbles to outright hostility and throughout their encounter a storm rages outside, reflecting their own internal turmoil. Constantly they drag the bitter past up, yet wishing to go their separate ways but unable to do so – in this hell these two are a necessary double act.

LaBute promises much with this text and the tension is palpable at times, with black humour relieving it from time to time. However, much of what is suggested, inferred or imagined fails to matrlialise and their selfish needs simply seem a requirement. They are a roundabout of bile to be revisited from time to time – can’t live with you, cant live without – more like estranged lovers than brother and sister, and there we have it – or not!

The direction by Anna Thomas, was sensitive and captured the ebb and flow of this emotional battleground with a set (realistically styled by Kalyani) which ominously had film posters for Reservoir Dogs and Grindhouse displayed on the walls – just incase we needed reminding of the possible results of all this domestic bliss! Home sweet home it is not!

The in-house technical team at Jagiti theatre were expert in sound and light provision, where a music soundscape from the likes of Sting interspersed with thunder and lighting, gave a sense of impending doom as the boorish brother and sister were ‘taking a rain check’, which seemed to then to take on a whole new meaning. Much was promised with this play but I felt the play simply didn’t deliver and although it is an impressive metaphor with snappy dialogue that zings along at times, in the end it leaves a bitter taste and feels empty and unfinished.

So should you find yourself in Bangalore, please drop in and support this splendid English speaking theatre company. you will be surprised and impressed!