Review of: Amadeus at the National Theatre

As devastating as it is dazzling, 'Amadeus' at the National Theatre is a spectacle of brilliance that portrays the genius of the late, great Sir Peter Shaffer.

There was great sadness in the theatrical community earlier this year when British dramatist Sir Peter Shaffer passed away, aged 90. From Five Finger Exercise to The Royal Hunt of the Sun, Black Comedy and Equus, Shaffer crafted varied and impassioned works that continue to thrill, enlighten and entertain audiences to this day. His 1979 play Amadeus, depicting the highly fictionalised life of Antonio Salieri, whose career, happiness and beliefs are constantly marred by the incessant genius of Wolfgang Amadeus Mozart, was an immense success for the National Theatre; it earned a total of five Tony awards including Best Play, and resulted in a 1984 film adaptation, penned by Shaffer, which went on to win eight Academy Awards, including Best Picture and Best Writing. It therefore seems an incredibly poignant choice for the National Theatre to revive Amadeus, a play concerned by the notion of artistic immortality, in honour of its brilliant playwright. The result is a glorious spectacle, which at its heart is as devastating as it is dazzling. 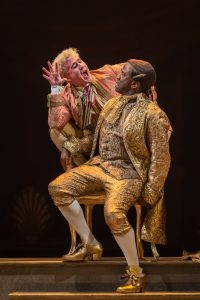 For a play entitled Amadeus, he is not the emotional heart of the piece – that epithet belongs to Salieri, played by the masterful Lucian Msamati, who embodies both the younger, relentless composer and his older, withering counterpart with equal skill and acute sensibility. This is Salieri’s narrative, and Msamati commands the stage and the audience with immeasurable power and passion, portraying his life and relationships in the manner he deems necessary. Therefore, in stark and blazing contrast we have Mozart, played by the buoyant Adam Gillen. From the moment he first strides onto the stage, garishly garbed and shrieking like an abhorrent child, Mozart initially teeters dangerously on the edge of becoming unbearable, prodigy or not. When faced with a character reminiscent of a caffeine-soaked ‘Richard Richard’ from Bottom, who squeals lines such as “I’d want to lick my wife’s arse instead of her face”, it is easy to understand why a man such as Salieri would dislike him so much: he is in possession of such majestic talent, yet seems somewhat undeserving of it. The simple matter that this is Salieri’s account of Mozart is all but forgotten under incessant giggling and fart humour. 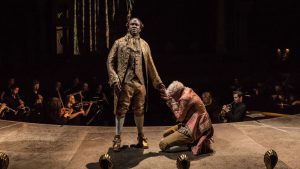 However, Shaffer does not deal in such simplistic character definitions, for there are both inherently distasteful and empathetic qualities in both men. Just as it seems Mozart could be lost to audience sentiment, he utters the wrenching statement: “My tongue is stupid. My heart isn’t”, and with that, his misdemeanours are understood. This is a man who is trapped in his childhood sentimentality, searching for the fatherly approval that he can never quite grasp, despite his immense talents. In comparison, Salieri is the man desperate for just a scrap of that holy gift, no matter the amount of accolades or royal appointments he receives. The two are so similar in their pain, dissatisfied with the lives they have led, but Salieri is so consumed by his fears of mediocrity that he cannot see past the glorious symphonies and arias, through his unyielding jealously of Mozart, to glimpse the tortured man underneath – and Msamati encapsulates this perfectly. When combined with Gillen, they are simply magical. With a somewhat different interpretation of the play than Amadeus enthusiasts might remember, the revitalised arc of Salieri and Mozart’s embittered relationship reaches a crescendo of such beautiful agony that, I am unashamed to admit, brings a tear to the eye. 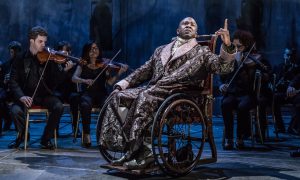 Of course, it would be neglectful in a review of Amadeus not to discuss one of the play’s greatest characters – the music. Performed by the Southbank Sinfonia, Mozart’s works are resurrected by these exceptional performers, who are woven into the narrative by Director Michael Longhurst as additional background characters, as if the spirit of music is a living, breathing entity that constantly incorporates itself in the everyday, and communicates its will to the members of this musically-enriched society. When his infantile jibes slip away, this is where Mozart’s genius resonates with just as much subtle grace as it does with invigorating fervour. Not only this, his compositions even receive a slight modern twist by Music Director Simon Slater; during a New Year’s party, Mozart’s Symphony No. 25 in G minor is accompanied with a pulsing timpani beat, reminiscent of current club music. There are other attempts at modernisation; for example, there is the incorporation of modern clothing for seemingly random members of the cast. This motif becomes jarring when juxtaposed with the aesthetics of 18th century Vienna, but the musical variation, in comparison, does not. Instead, it demonstrates that Mozart’s music transcends time periods, and can still connect with the musical tastes of individuals hundreds of years after his death, while simultaneously furthering Salieri’s dissatisfaction with one additional stab at his inescapable mediocrity.

With stunning visuals, captivating performances and wondrous music from the great composer himself, this revival of Amadeus at the National Theatre revels in the majesty and misery of a genius unappreciated by his contemporaries, and a composer who is unappreciated by future generations. Although the fate of our poor Salieri is to dissolve into the realm of obscurity, the production proves that the genius of Sir Peter Shaffer will live on for many years to come. For the cast and production team of Amadeus, I have one thing left to say – grazie.

Amadeus will be continuing its run at the National Theatre until February 2nd 2017, with performances Monday – Thursday at 7/7.30pm, and Saturday matinee and evening performances from 2pm and and 7.30pm respectively. 2016 marks the fourteenth Travelex Tickets season at the National Theatre, where hundreds of tickets for Amadeus will cost just £15.

On February 2nd 2017, Amadeus will also be broadcast live to over 680 screens around the UK. Please see www.ntlive.com for further details.