CLAIRE DARGO plays Rebecca in The Island Nation, ice&fire’s new production being staged at the Arcola Theatre from the 28th October – 19th November.

ice&fire was founded by award-winning playwright Sonja Linden in 2003 and is a theatrical company and charity specialising in the exploration of human rights stories through performance. It works closely with those impacted by human rights violations and aims to bring these issues to the forefront of public awareness in an innovative and compassionate way. Recent productions include The Nine O’Clock Slot (Red Gallery 2014), On the Record (Arcola Theatre, 2011) Even If We Lose Our Lives in association with Amnesty International and My Skype Family at Southbank Centre. The Island Nation is ice&fire’s sixth full-scale original production for the stage. 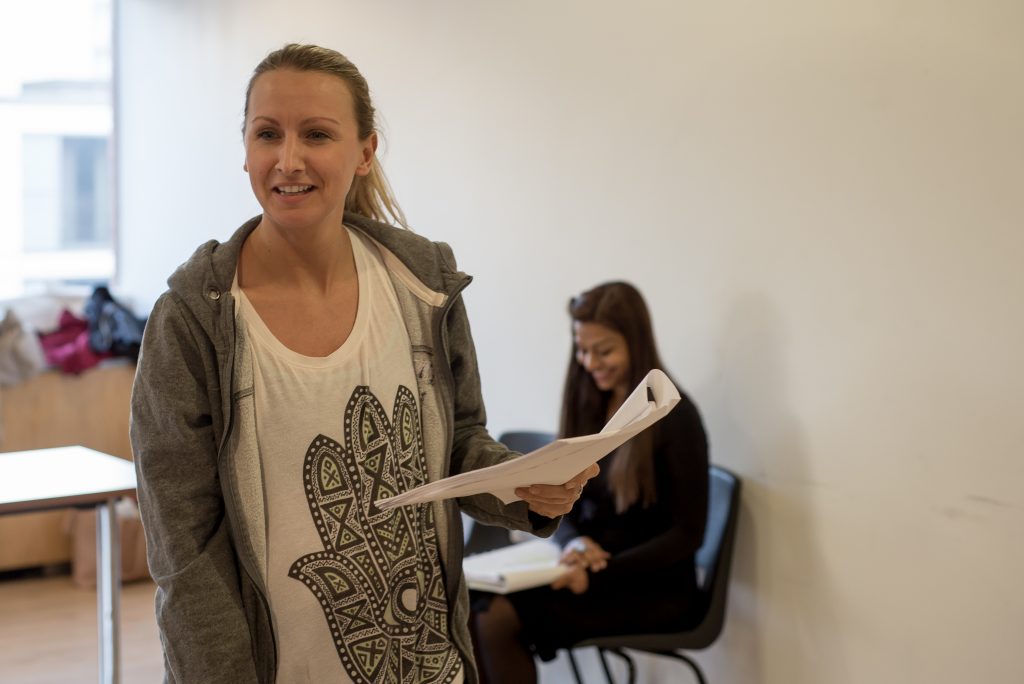 Claire Dargo in rehearsal for The Island Nation

Theatre Bubble: ice&fire has been credited with contributing to building a human rights culture in the UK. How does the company’s work achieve this, and how does The Island Nation fit into this work?
Claire Dargo: This is the first time I’ve worked for ice&fire so don’t feel I’m best equipped to answer this. However from working on The Island Nation I feel their work is hugely important. It’s telling real life stories about people who wouldn’t normally have the opportunity to be heard. It educates people about subjects they may know nothing about. I was one of those people. For more information on the company check out their website.

TB: Why is so little known about the 2009 Sri Lanka conflict?
CD: I honestly have no idea why so little is known about the conflict, probably because the Sri Lankan government didn’t want anyone to know about it and so restricted access to journalists, aid, everything. The reasons why are explored from many angles in the play. I was one of those horribly uneducated people on this subject and when I went along to the audition couldn’t believe that this had happened, especially as it was only 7 years ago! The more research I did, the more horrific it was.

TB: Can you tell us about your character in the play?
CD: Rebecca is one of the UN employees in the play. She’s loosely based on a guy called Benjamin Dix, a British aid worker, who was out in Sri Lanka at the time. His story is fascinating and lots of it is mirrored in the play. I’ve created a slightly different backstory to help me connect with the piece. Ultimately she’s the one driving the story forward, she wants to make sure the wider world knows about the horrific events happening in the war zone.

TB: What is your advice for anyone wanting to make a career as an actor?
CD: In my honest opinion find work that can run alongside your acting career that also makes you happy. So much time as actors is actually spent out of work that it’s so important to live your life and not put everything on hold. Find that balance and be prepared to sacrifice many things holidays, friends weddings, etc. However, it’s all worth it when you love what you do and feel thankful to be getting up in the morning to do something that challenges you and with work like this hopefully makes a difference.