The first Arthur Miller play to be produced at the Rose Theatre Kingston, All My Sons opens on the 28th October and runs until the 19th November. Michael Rudman (Director of the Lyttelton Theatre, NT) directs a cast including Penny Downie, David Horovitch and Alex Waldmann. I spoke to Waldmann, who first garnered attention in Cheek By Jowl’s Troilus And Cressida, about his role in the production. 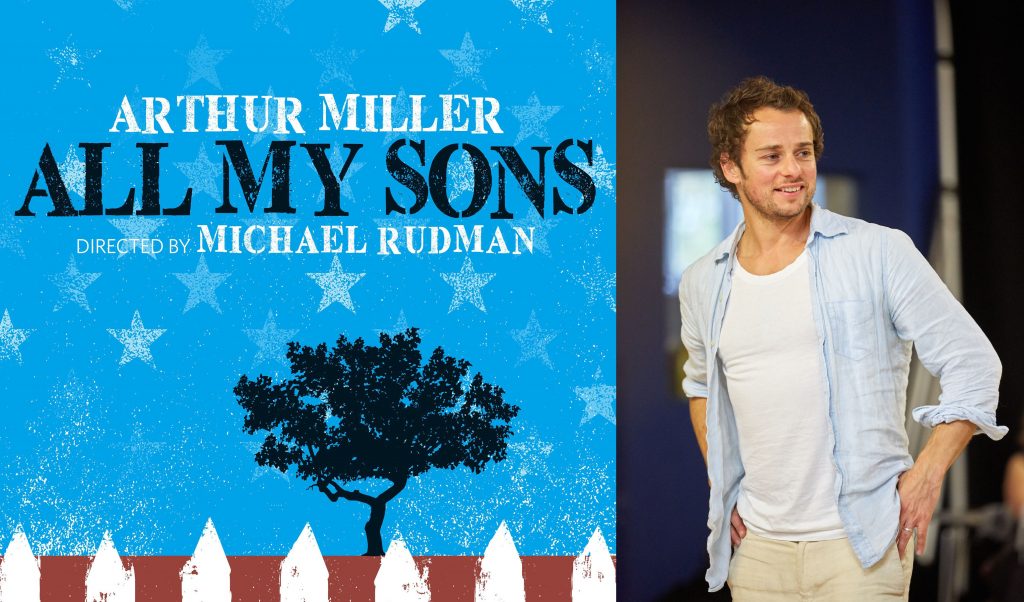 Theatre Bubble: This is the first Arthur Miller play to be produced at the Rose. What makes it a particularly compelling play for today?
Alex Waldmann: Fundamentally because it’s one of the greatest plays ever written by one of the most important dramatists of all time. A brilliant play is a brilliant play whatever year it is premiered or revived. And iconic works of art will always speak to us and connect with us – whatever the socio-political climate they are being observed in – because, at their heart, they capture something of what it is to be human. By exploring and exposing one particular family in mid-1940s Ohio, it manages to speak universally about society and consciousness in post-Depression, post-Second World War America. We can all relate to watching a dysfunctional family trying to get on with their lives whilst fighting against the personal grief, guilt, shame, lies, secrets and tragedy we all feel in our own ways. The more specific social, political and economic issues it brings up – the pursuit of money, prioritising responsibility to family before society, lying for a greater good, and the selling of dodgy military equipment for personal profit – only heighten its timeless relevance.

TB: Can you tell us about your character in the play?
AW: I play Chris Keller, who we discovered in rehearsal, is not (as is assumed in much of the literary commentary written about All My Sons) the youngest, but is in fact the elder of two brothers – his younger brother Larry died in the war, and he is the only surviving son. He is trying to make something of his life and make sense of the world as a returning soldier from World War Two. Underneath an apparently charming exterior, he is a deeply troubled, complicated man who is grappling daily with what the right thing to do is, in a post-military life where responsibility and fighting together against a common enemy for the greater good were much more clear cut for him. He is dealing with massive Survivor’s Guilt and Post Traumatic Stress Disorder, whilst being hopelessly in love with his dead brother’s fiancée, who he sees as his only shot at a meaningful future. He is someone who was apparently a real killer in the war yet frightened of a mouse back home. Someone who other people look to for hope and idealism, but inside his own mind, hates himself deeply. Someone capable of loyalty and affection but also of uncontrollable violence. It is such a brilliantly contradictory and challenging part, probably the most difficult I’ve ever played.

TB: You’ve had an impressive career performing in classical texts, at the Rose Theatre, the Globe, the RSC and elsewhere. Do you feel the current theatrical climate favours revivals of classics? If so, why?
AW: Commercially, it is probably always easier to sell tickets for a play that people have heard of by a writer whose name they recognise. And the ground-breaking work of visionary directors such as Robert Icke manage to reinvent classics brilliantly for modern audiences. But I think the consistent reviving of classics also encourages theatres and theatre companies into providing an alternative by developing and nurturing new writing. Most subsidised theatres program a carefully-considered balance of new work alongside big revivals. And quality new plays will often get the attention, recognition and attention they deserve, establishing the must-see playwrights of tomorrow. Jerusalem by Jez Butterworth, Enron by Lucy Prebble, This House by James Graham and People, Places and Things by Duncan MacMillan are just a handful of recent modern-day classics.

TB: What is your advice for anyone trying to become an actor?
AW: Get on with your life, don’t wait for the phone to ring. Living life is the best research we can do to become better actors. If you want to go on holiday, go on holiday. It is easier than ever to meet for something remotely via self-tape/Skype from wherever you are in the world. When you’re starting out, take money out of the equation, by finding a way to make money in a job you enjoy doing each day. Then, hopefully over time, you can supplement more of your income through acting work. The last pressure you need to put on yourself when going into a meeting is having to get the job because you need the money. Be decent and respectful to everyone in any building you’re lucky of enough to work in – common courtesy is appreciated and remembered.

TB: What would you most like to change about the industry?
AW: For women, BAME actors and parents of young children to be better supported and better represented in the industry. I understand it, because money is tight for everyone at the moment, but it’s always a shame when actors’ wages are the easiest thing to dispense with in fringe theatre production budgets.