Review of: Vanities the Musical at Trafalgar Studio

Produced by:
Matt Chisling and Amy Anzel, with Aria Entertainment and Anita Creed

Vanities has a strong cast sustaining its fuzzy-hearted core

Spanning four decades in both story and age, Vanities is an interesting choice of show to be both adapted into a musical and then to see nestled in Trafalgar Studios’ lower venue – transformed into a cosy, warm 3-hander, chronicling the passing of time for 3 teenage Texan friends as they grow to adulthood and maturity. While certainly swaddled in flaws, there’s something oddly refreshing about this jubilant, primary colour experience – one that will certainly leave you smiling, even if you aren’t entirely convinced why.

Vanities has a strong cast sustaining its fuzzy-hearted core. Lauren Samuels, a marvellous presence in The Busker’s Opera earlier this year, here takes on a role in a show with far less edge, and all the better for it – her character arc is displayed with a fantastic physical flexibility, aging naturally from a jubilant (albeit skeptical) teen right the way through to a pensively contented woman. Ashleigh Gray did likewise, having some startling solo numbers, while Lizzy Connolly, in a role that far too frequently was reduced to comic relief (though incredibly well executed comic relief at that), managed to bring some integrity to a farcical role by the final scene. 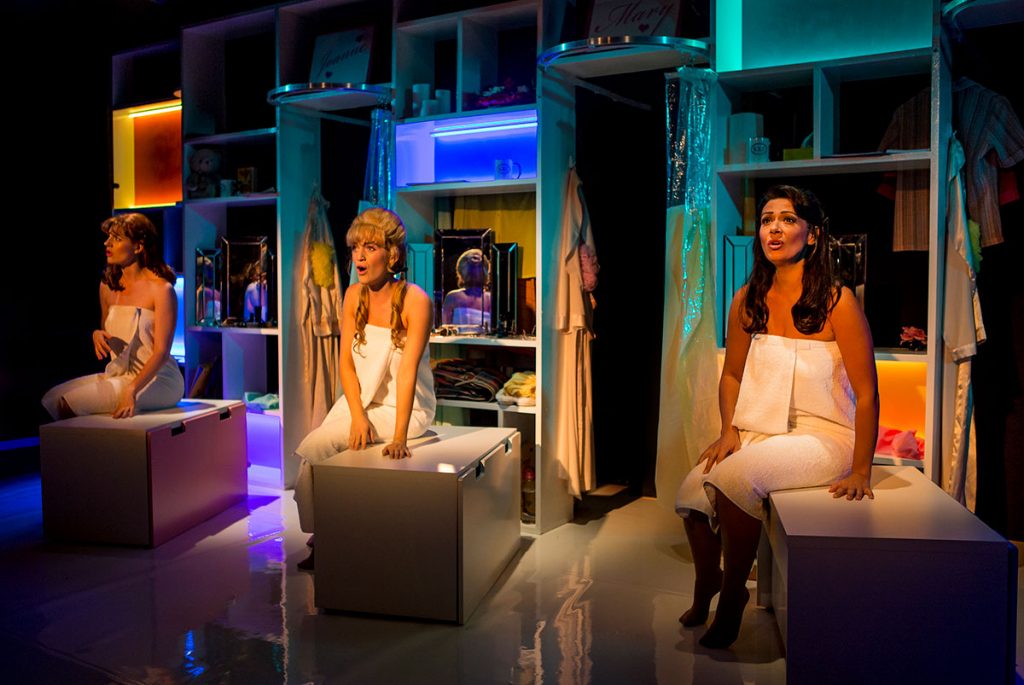 The musical’s episodic structure (jumping forward 4-6 years every scene) was its greatest downfall here. Where shows of a similar ilk (My Mother Said I Never Should being an easy comparison) can be innovative in their use of non-linear narratives, here Vanities was forced to insert drawn-out, unnatural tracts of expositional dialogue simply to keep the audience in the know, undermining emotional believability and creating a certain distance that felt frustrating. A more innovative adaptation of Jack Heifner’s original text would have been so much more cathartic, with the show instead trundling along to an ending that felt at most pleasant – the theatrical equivalent of seeing a heart-warming poster with a motivational quote on it.

Andrew Riley’s design is functionally innovative and allowed for relatively smooth transitions, particularly with the use of shower curtains and the correlation between changing outfits and the passage of time. This is a show obsessed with, before rejecting, the notion of aesthetics – body image, emotional image, personal image all the key focus points amidst the sources of tension. Racky Plews uses the cosy space of Trafalgar Studios 2 comfortably, creating the illusion of space where needed with subtle yet nuanced blocking – the sign of strong direction and an enjoyably fun ride. A strangely optimistic play and almost anachronistic in modern circumstances, but perhaps that’s what’s needed for modern theatre.