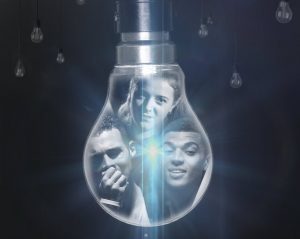 In August 2016, a new study reported that the number of people suffering with a mental health issues has risen by 10% in the last decade, with one in three teenage girls being diagnosed with depression or anxiety.Thrive is a life-affirming show which empowers young people to open up about death and dying, and to face difficult life experiences head on. Based on case studies and insights from leading Post Traumatic Growth researcher Dr Roger Bretherton, the show uses humour, movement and spoken word to explore psychological models and help audiences understand how trauma affects us and find ways of coping. By placing them in the middle of the set with actors speaking directly to them, Thrive helps audiences confront stressful situations, portraying the most challenging of emotions with courage and optimism.

Thrive is about three young people that didn’t go looking for suffering, but suffering found them anyway. When Ollie, Ashleigh and Ralph are thrown together by the sudden death of someone they knew, they find themselves wrestling with the turbulent emotions that painful events throw up.

As well as theatres, the show will tour to schools and non-theatre spaces to make it accessible for those in hard to reach areas. The set, which comprises of nine ladders that surround the audience, also acts as a lighting rig which enables Zest to deliver the same high production values in a community hall as in a theatre venue.

Toby Ealden said, “As a company we have spent the last 9 years working with thousands of young people across the country. We believe in the power of the arts to empower our participants and change lives. But too often we meet young people whose negative life experiences have left them feeling isolated, worthless and ‘boxed in’. With a rise in young people’s mental health issues reported in the media, we felt the time was right to make a show that tackled this stuff head on. How can you face difficult things but come to the other end a stronger, more hopeful person? We want to empower our audience to grab life with both hands, face challenges, find strength in the face of adversity and ultimately Thrive! This isn’t a glib or naive approach, it’s based on 20 years of Psychological research into a field of work called Post Traumatic Growth. It’s real, courageous and packed full of hope.”

Lincoln based Zest Theatre, established in 2007 by Toby Ealden, creates theatre for, by and with young people. They aim to make theatre accessible through dynamic productions and participation projects inspired by the needs, lives and imaginations of those aged under 25. Last year around 19,000 young people accessed their work either as audience members or participants in a range of dynamic productions suitable for theatres, schools, community venues and public spaces all supported by exciting participation projects. Their last production, Gatecrash, toured in 2014 and again in 2016.

Director Toby Ealden has been making theatre for young audiences for over ten years including youth theatres, school tours and national touring. His past work includes working as the youth theatre director for Nacro, the national crime reduction charity. During his time there, Nacro toured with young people across the country, including to the National Theatre.

Dr Roger Bretherton is a Clinical Psychologist trained in several psychological therapies that emphasise mindfulness, including Existential Psychotherapy, Dialectical Behaviour Therapy, Sensorimotor Psychotherapy and Mindfulness-Based Strengths Practice. He worked as a clinician, manager and trainer in the NHS for over a decade, and joined the University of Lincoln in 2007, where he specialises in coaching and positive psychology.