Review of: The Complete Deaths

This is a show targeted at a niche of individuals, and as such there are moments that will cause a select bunch to erupt in side-splitting laughter.

You can see Tim Crouch, director of The Complete Deaths, rubbing his hands with glee at the prospect of working with Spymonkey and their newest script. This is a piece cut from Crouch’s own cloth – a deconstructionist’s dream of actors railing against the greatest theatrical authority of them all – the Bard himself. Over the course of a couple of hours, we see not only the on-stage death of every applicable Shakespeare character (there were 75, by Spymonkey’s tally), but also an attempt on the life of Shakespeare’s own reputation – his legacy. Every death, every play almost, is prodded, teased apart and mocked, in an attempt to ridicule the man from Stratford and expose the fact that he is no deity – just another writer. It’s a fantastic concoction, delivered with a dizzyingly hectic wildness throughout by the troupe of four.

Indeed, the show bears resemblances to a number of Crouch’s own works (the obvious comparison being I, Shakespeare), especially the use of video tech. This is a kaleidoscopic, flashy affair – circular saws, burning paper statues, huge inflatable zorbs all intermingled with hilariously on-the-nose comments about the current state of the theatrical enterprise. The fact the show was in Shoreditch led to no shortage of comedy. 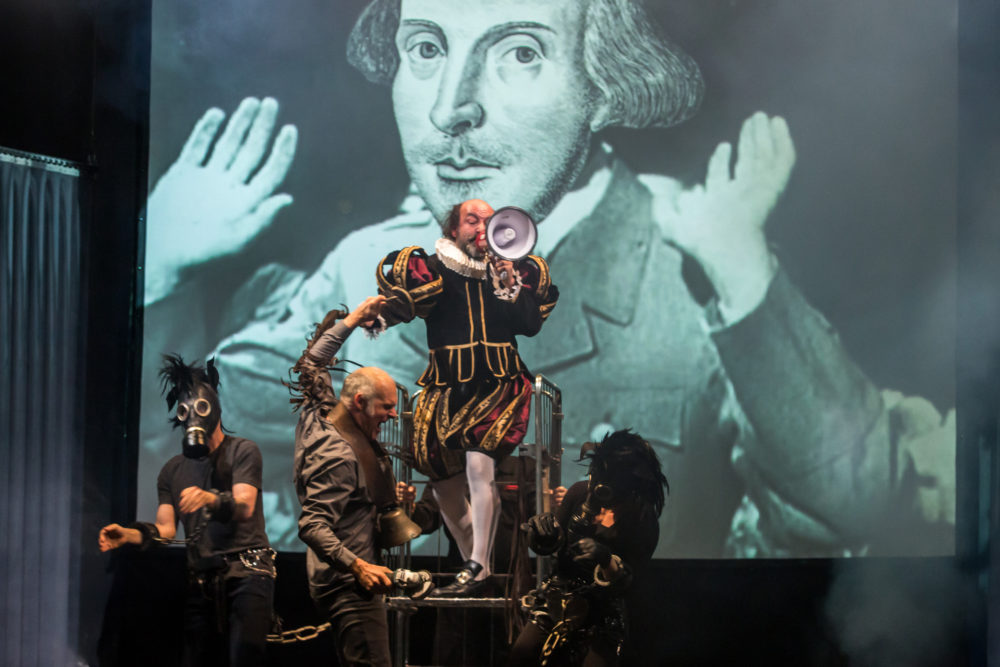 If anything, this anarchic energy is a source for the flaw in the film – the complete sense of stupendous anarchy present does undermine some of the logical cohesion of the show, as it bounds between ridiculing its own concept and the clownish performers, before committing once more to fulfilling that same concept. A through-line is therefore harder to trace than one may have desired, but the sacrifice may have been necessary for the artistic vision of the show.

Nudity, frivolity and capers are indeed well executed by a superb cast that are entirely committed to their own, stupendous premise – changing costumes and characters with reckless ease and abandon. Lucy Bradridge’s design is minimalistic yet entirely in keeping with the production, never frightened to commit to exuberant set pieces when the occasion calls for it. The classic Act 5s from Hamlet and A Midsummer Night’s Dream are the standout moments here, a hilarious riff on classic formulas, a nice breath of air in an increasingly cluttered bill of Shakespeare performances across the country.

This is a show targeted at a niche of individuals, and as such there are moments that will cause a select bunch to erupt in side-splitting laughter. If you are a Shakespeare lover, or purist, then invariably this is entirely up your street.