With two months to go until the UK stage premiere of Baz Luhrmann’s worldwide bestselling film, STRICTLY BALLROOM THE MUSICAL has given a sneak-peek into the scale behind its glitz and glamour.

STRICTLY BALLROOM THE MUSICAL is the inspiring story of a championship ballroom dancer who defies all the rules to follow his heart. As the countdown begins until the UK premiere at the West Yorkshire Playhouse on 30thNovember, the production team have done some counting of their own to reveal what goes into creating a show of this scale.

As befitting the production’s grand entrance, STRICTLY BALLROOM THE MUSICAL will bring with it 745 metres of coloured ostrich feathers: over twice the size of The Shard in London. All costumes have been designed by Catherine Martin, whose designs for the Baz Luhrmann blockbusters The Great Gatsby and Moulin Rouge earned her a total of four Academy Awards.

In keeping with Baz Luhrmann’s trademark touch for the opulent, the production will feature 208,000 hand crafted diamantes. Additionally, each of the £5,000 wigs will take 5 days of continuous knotting, and will have to be redressed daily and washed weekly.

To keep up with Drew McOnie’s Olivier Award-winning choreography, the cast will consume 600 litres of water a week: averaging at ten times the recommended daily amount. Extra energy will be available onstage, however, as the part of Sangria will actually be played by cranberry juice. 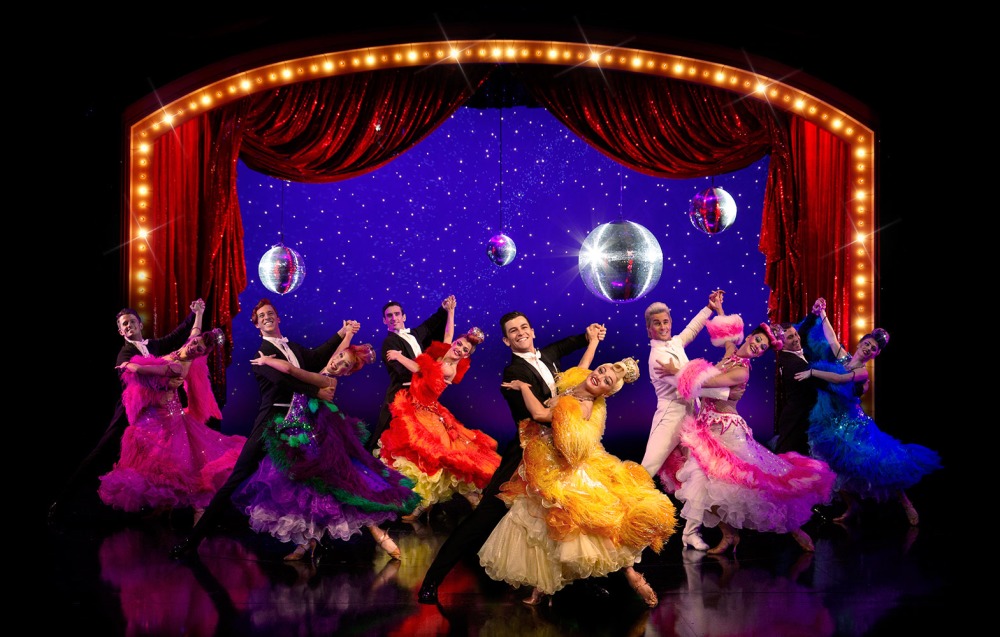 STRICTLY BALLROOM THE MUSICAL is the inspiring story of a championship ballroom dancer who defies all the rules to follow his heart. It features break-into-song numbers such as Love is in the Air, Perhaps Perhaps Perhaps andTime After Time, as well as several wonderful new songs by internationally acclaimed artists including Sia, David Foster and Eddie Perfect.

STRICTLY BALLROOM THE MUSICAL is a co-production by Global Creatures (the team behind Walking With Dinosaurs – The Arena Spectacular, How To Train Your Dragon and King Kong) and West Yorkshire Playhouse, who recently co-produced James Brining’s critically acclaimed production of Chitty Chitty Bang Bang, currently on a major year-long tour of the UK and Ireland.

STRICTLY BALLROOM THE MUSICAL made its world premiere at the Sydney Lyric Theatre in April 2014, followed by seasons in Melbourne and Brisbane in 2015. This spectacular show, a kaleidoscope of colour and fun, now promises to have UK audiences dancing in the aisles!

This uplifting and courageous tale, which plays in the Quarry Theatre, originated as a stage play that Baz Luhrmann devised with a group of students at the National Institute of Dramatic Art, Sydney, Australia, in 1984. The film was discovered at the Cannes Film Festival, where it was the winner of the Prix de Jeunnesse and runner up for the Palme D’Or. When released in Australia, Strictly Ballroom swept the field at the 1992 Australian Film Institute (AFI) Awards, gaining 13 nominations and winning in eight major categories. It also won three awards at the 1993 BAFTA awards, received a 1994 Golden Globe nomination for Best Picture, and eventually went on to become one of the most successful Australian films of all time, earning more than $80 million at the box office.