Review of: Pilgrims at the Yard Theatre

A play about mountaineering, folk tales, and those who are left behind.

“Two men are on a mountain. The men are handsome. The men are tall. The men are Caucasian.” Elinor Cook’s new play about dependence, ambition and the stories we tell begins with a premise as formulaic as those of tales that fascinate its protagonist, Rachel (Amanda Wilkin). It soon becomes apparent that the truly important thing is not what the story is, but who is telling it, who it belongs to. 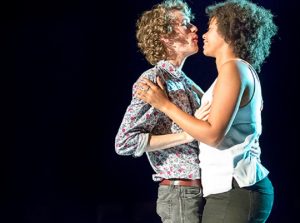 There’s a fluidity to Pilgrims – stylistically, linguistically, and in its portrayal of the passage of time – that gives it something of a fairytale feel. The drama unfolds on a stage tiled with scenes of a sailing ship, arranged into a pattern resembling Wales, home not only to egotistical dandy Will (Steffan Donnelly) but also to Theatr Clwyd, the Flintshire theatre that played a key role in the play’s development. This design by James Perkins – complimented by Nicholas Holdridge’s intriguing underlighting – is inspired in its simplicity, encapsulating a number of ideas from the piece in stark, visual terms that evoke the rugged bleakness of the mountain around which the play revolves.

The piece is often described as “a play about mountaineering”. In accordance with the folk symbolism the story draws upon, the mountain becomes a metaphor for goals, challenges, and the individualistic ego. As Rachel points out, there’s something very phallic about claiming virgin territory by sticking a flag in it, then leaving for the next conquest. The two men in the play embody male privilege in this sense, each as insensible as the other to the consequences of their pursuit of self-actualisation. Through Will’s flamboyant, unabashed narcissism and Dan’s (Jack Monoghan) pathological wanderlust, we see the impact of the male ego on Amanda’s story. Just importantly, we see the toxicity of all-consuming relationships and the destructiveness of sacrificing everything for a single end, be it a partner or a peak – although once again, the social expectations mean the fallout disproportionately affects women.

The writing and performances have many strengths. There’s something of Withnail and I to the dynamic between the male characters, with a pleasing contrast between Dan’s taciturn earthiness and the needy eccentricity of Will, who above all else brings essential energy, humour and unpredictability to the piece. Wilkin brings both poignancy and strength to the character of Rachel, ably teasing out the poetry in Cook’s dialogue, although there were points toward the beginning where her emoting seemed somewhat forced, with casual-sounding lines being delivered with unearned gravitas. She gave an excellent performance in the later, truly emotional moments, but the somewhat heavy delivery early on made the piece feel emotionally repetitive at times. This was exacerbated by the script’s tendency to overuse the scene structure of a mundane, jokey conversation that suddenly flares into a row, followed by a moment of emotional intensity. This mechanism is common in this type of play, but when three or four consecutive scenes are arranged according to the same pattern, it begins to feel artificial.

Nevertheless, the story is compelling and its message elegant. Tamara Harvey’s graceful direction and crystal-clear awareness of theatricality makes the piece touching and beautiful to watch, and this allows the vital questions it asks to slide into one’s consciousness almost unnoticed. Though like any climb, it has its rocky patches, Pilgrims will move audiences and leave them asking who is permitted to sail into the sunset, and who is left standing on the shore.

Pilgrims continues its run at The Yard until the 15th October at 8pm every day except Sundays. The play is 70 minutes long with no interval.