Review of: Pigeon English at the Ambassadors' Theatre

It is great to see the NYT at such a good venue and it is commendable they are presenting meaningful work which entertains and is both challenging and relevant.

The eyes have it!

PIGEON ENGLISH landed at The Ambassadors theatre this week, courtesy of the National Youth Theatre, and it took flight as they created a moving physical and emotional exploration of young people on the edge in our contemporary inner city life.

PIGEON ENGLISH is a new adaptation by Gbolahan, Obisesan of the award nominated book by Stephen Kelman. It is a devastating insight to life on an inner city estate focusing on the struggle for survival against poverty, against the lack of opportunity, the lack of education and the lack of self-esteem. Yet do not think this play is without humour or does not have great entertainment values – it does. It is staged by Anna Niland with pace and physicality – engaging the audience as the young cast, stride, run, jump and dance their way through a story that both entertains and shocks its audiences. Great work from Movement Director, Kane Husbands. Equally, Elliot Griggs, Dom James and Tommy Antonio deliver bold lighting states combined with an atmospheric sound scape cut with dance-music intervals serving to give the piece a rich contemporary vibrancy.

With direct narration, the scenes switch from home, the ninth floor in a high- rise block, to the playground or to the bus stop and even to the stairwells. The action is seen through the innocent ten year old eyes of Harri, energetically played with a steadfast sense of optimism by Seraphina Beh, bringing an androgynous quality to the role, thus making us feel that the play is not about just one boy or girl whose youth will be stolen by the contaminating social ills in this urban environment. 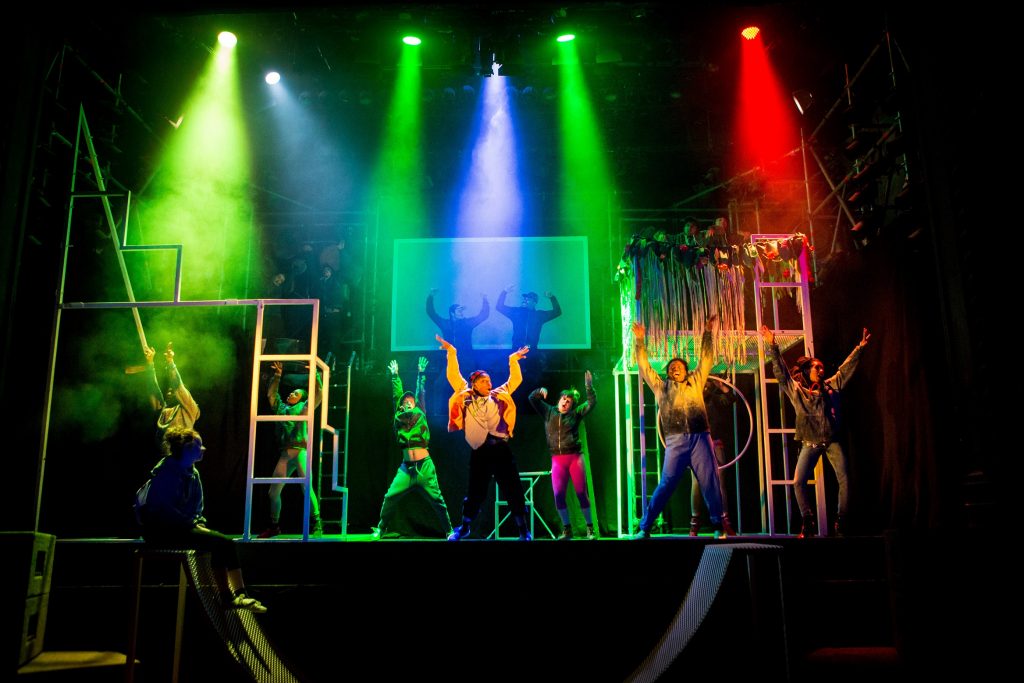 A range of recognizable characters, the bully, the thug, the vamp, the traitor and even the innocent bystander are delightfully played by a company that is well drilled and focused in creating scenes where theses working class characters are given depth and a liveliness which is refreshing. Foolish they may be, clearly desperate and dangerous but they are also fun, caring, creative and supportive – against all the odds at times. Felix Mackenzie-Barrow as Dean and Arianna Beadle, as one of the demanding girls, were particularly effective at times as they bridged the tragedy and comedy of it all with some skill.

The plot and action surrounds the untimely death of youngster at the start of the play set against the backdrop of cooing pigeons (a recurring image – suggesting that eventually birds do come home to roost?). So we journey with young Harri’s life on the estate as he chases up clues, both real and imagined, helps and deceives family and friends all of which compromises his best efforts to stay this side of the line. It is here that the play shows the complex challenges of survival, not just amongst the disenfranchised youth but also with the adults who find themselves powerless against the face of poverty, crime or abusive relationships – you do what is necessary to survive.

Sadly the play spirals towards the demise of our young protagonist and good intentions become foolish mistakes and however much he ducks and dives it is to the stairwell he runs – so nearly home and safe and yet he is attacked and knifed. In a pool of his own blood he is lying bleeding to death with a mum at work and no one to contact he becomes yet another statistic of gang knife crime. Another lost soul. This play could be a eulogy to Dameloa Taylor, and every other young person at the mercy of gang culture. Such children are seemingly dispensable, certainly fearful and inevitably victims of ‘petty lies from blinkered minds’. Hope seems to have taken flight here and these fledging youths are caged and see themselves as ‘war brothers’ raging and scrambling to survive. Like birds of a feather they stick together as there sees little option to do otherwise and if you dare to think there is then you might just have your wings clipped.

It is great to see the NYT at such a good venue and it is commendable they are presenting meaningful work which entertains and is both challenging and relevant.

The NYT season at the Ambassadors runs from September 26th until November 22nd. – Check performance times.