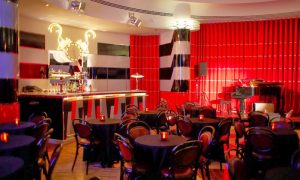 Brasserie Zedel originally opened in 1915 as the largest hotel in Europe with 1028 bedrooms (as its website proudly claims) before being designed and completed in the 1930s in the unique art-deco style that was to became so iconic of that decade. However, over the next half-century it gradually started to decline until, in 2004, the Crown Estate decided to redevelop the interior while attempting to uphold its first 1930s vibe. The result is spectacular – a vibrant, seductively glamorous aesthetic perfectly suiting the mission statement of this massive redevelopment.

It is only fitting that this achievement be marked in a suitable fashion, the result of which is the programming of Live at Zedel – a combination of cabaret, drag, new writing, musicianship and generally a celebration of what it means to be artistic and produce theatre. When stepping into the bar itself, with the slightly self-consciously atmospheric low lighting, surrounded by the upper echelons of the London theatre world, I did begin to wonder whether I was slightly out of my depth considering my usual choice of scratch-night/drinking venues. Drink-stained, grotty wooden panelling is much more common than the gorgeous tiling of Zedel’s – and as every piece of theatre obviously functions within a certain space, I was interested to see how the very carefully constructed art-deco atmosphere would influence our perception of the short pieces chosen for this opening night.

The two more classically ‘theatrical’ pieces that opened the night, stemming from two emerging companies, Etch and Damsel, provided a more thoughtful beginning to the evening – one that was, however, slightly at odds with the ‘Crazy Coqs’ sign hung in front of the red curtain and the rather decadent surroundings. A venue that has that much aesthetic punch tends to become a character in the show itself – not that this is in any way a criticism of the two starting pieces, but rather an observation on the venue space itself. The drag act Denim that rounded up the show were much more suited to the atmosphere, as the glamour and opulence translated into their piece and made it spark with energy – I suspect this venue will become the ideal for pieces of this nature.

The future of Live at Zedel is looking equally bright, with appearances by Tim Minchin, Lucie Jones, Denim all coming in the next few weeks, a West End open mic night with Julie Atherton & Simon Lipkin scheduled along with the Philharmonia Orchestra itself gracing the stage. If you like your evening smoky, dramatic and pumping hot, Zedels seems like it will fast become the place to be.