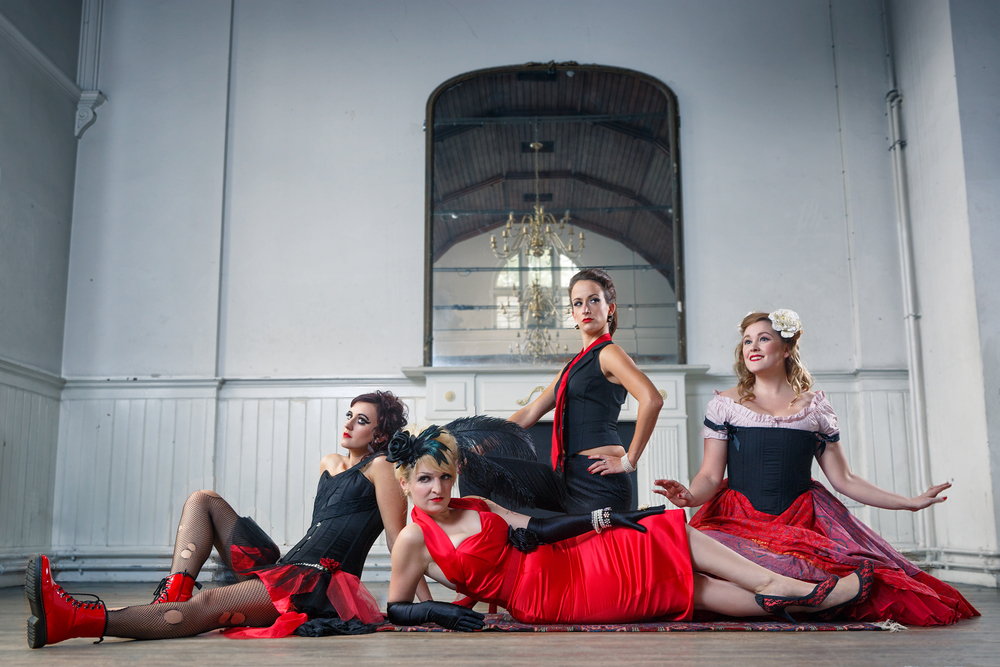 Theatre Bubble: The story of Bluebeard is a classic. What drew you to it, especially now, in 2016?
Susanna: Well, when we read the story of Bluebeard, we were quite drawn to various adaptations of it. So we read the original, and we read the one written in 1975 by Angela Carter. She slightly reimagines the original. She gave the other wives a role, not fleshed out, but they had a role in the kind of sense of character. And then she had it so that the mother came in – like a pistol whipping mother – and she shot him – so she kind of subverts the whole mother role being really passive in fairy tales. So we read that, and then we thought ‘what would happen if she saved herself?’ If, instead of relying on someone else, we actually gave her agency?

Susanna: And it’s about time that somebody did give her agency. So, we explored that, and that’s what we’re doing in ours. She kills him. SPOILERS [laughs].

Jessica: The other thing we’re doing is, like in Angela Carter, we are fleshing out the original wives and giving them life, whereas in the original story they are literally bodies. So in ours you have this guy – he’s almost kind of vampiric, he’s been alive for thousands, hundreds of years – and we’ve got the different wives from completely different historical contexts. So you see these different women in their various historical contexts, which is quite interesting, and how they tried to negotiate their way out of this awful relationship. And then obviously met their death.

Susanna: So they are four individual women and their tracks are running in parallel. They are Every Woman, every woman’s struggle against the patriarchy, just kind of showing it with the different times.

Rebecca: And by showing it through time, I guess what we are saying is that it’s been going on for a long time, and it’s an eternal thing, and it’s happening even now.

Susanna: And, it’s one woman and her story, or Every Woman, and it’s symbolised by how we sing in harmony – womanhood and women coming together.

Theatre Bubble: I actually wanted to ask about the music in your show. It’s a mix of covers and original music. I’ve heard some of your tracks online and they’re very peppy and energised but often have very grim, dark lyrics, like ‘Edible Wife’. Can you tell me about the songs?
Rebecca: We’re all of us musicians as well as writers as well as performers as well as comedians who are kind of polymath people, so what we come up with in the room due to the process that we go through and the fact that all of us have an opinion means that quality control is each other. When we are making new stuff we end up with something better than we would have otherwise because we’re all writing for the audience of the Dolls.

Tara: And much like the different dolls and the different experiences we bring, all our shows to a greater or lesser degree incorporate cabaret, storytelling, theatre, and comedy, and musical theatre in a way. So, since our baseline is cabaret, we have the freedom to explore different sections, permutations, and recipes of those combinations. So we’re never quite sure where we’ll end up as when we begin the process. But what we do is we hollow out those different aspects, and in the end it hangs together. I think that’s very interesting, because you never quite know what you’re going to find. 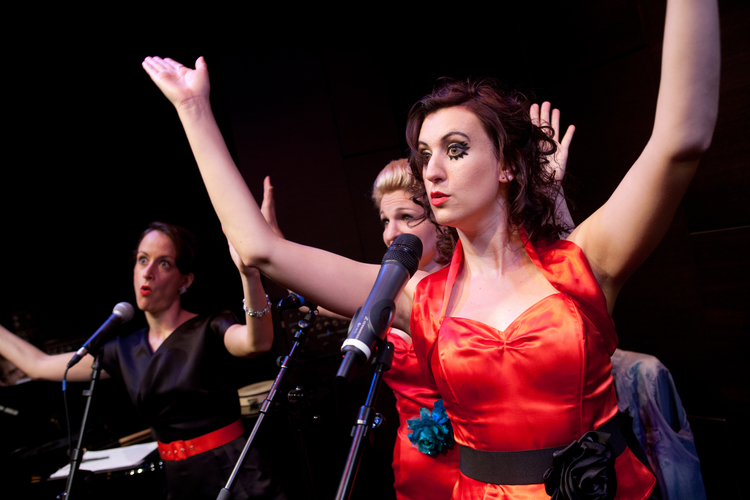 Theatre Bubble: So you’re writing your original songs yourselves. What are you looking for in your covers, your arrangements?
Tara: We started from musical roots, even before we knew we were going to do an adaptation of Bluebeard, and I think that’s added great depth to the music that we ended up with. But it caused us to be terribly brave, because we’ve had to cut things that we absolutely loved. We’ve had to really think about the way we’re using music, which I think has really enhanced the way that we’ve told the story, and has also added to our repertoire of cabaret gig music, which is fantastic – we can use it all.

Theatre Bubble: I was exploring your website and saw that you all came from drama school backgrounds. What took you from the traditional acting route into cabaret?
Susanna: So T, Jess, and myself were all at LAMDA, and we came out and we were actors. We ended up in this play where we were singing in four-part harmony, and then we just thought we could do this and make a bit of money. And then after that we got to add the thing we were passionate about into that, which is telling stories and theatre. So what if we combined the two and we tried writing something? We were commissioned by the Soho Theatre when they were doing the commemoration of the Berlin Wall coming down, and they wanted some Weimar-esque scenes, so we had a go and put something together, and we were like ‘Hey, this probably has legs!’

Jessica: We’ve been through an interesting process through the last eighteen months saying ‘What is cabaret’, ‘How do we define cabaret for us’, and we’re still on a journey with it. But there’s something interesting about how we play ourselves onstage. We’re trying to strip away the layers – after our drama school backgrounds we’re trying to be more and more ourselves.

Susanna: And also, even in the storytelling of our show currently, I believe that we – even within the characters – reveal aspects of ourselves in that. And cabaret allows vulnerability – it allows ourselves to be revealed in a heightened way, but because you are not pretending it is real, you can f*** realism, we’ve banished that.

Jessica: This piece has a complete narrative and a satisfying story – it’s probably as complete a narrative as you’d get in a play. It’s horror, effectively. But you’ve got this set with four microphones, music, very simple cabaret aesthetic. So you’ve got a lot of freedom within that framework to play around so you’re not as constricted by this narrative as you would be in a play. You can say ‘Hey, you’re out there!’ to the audience!

Rebecca: Even when we are playing the dead wives, there are moments when we can contact the audience. There are moments when we come out and we are storytelling, but then it’s like we’re reading a book. So it’s very much about different ways of being looked at and different ways of reaching, getting close to the audience and then getting further away and creating that distance away from them that I think says a lot about what’s happening in a coercive, controlling relationship. 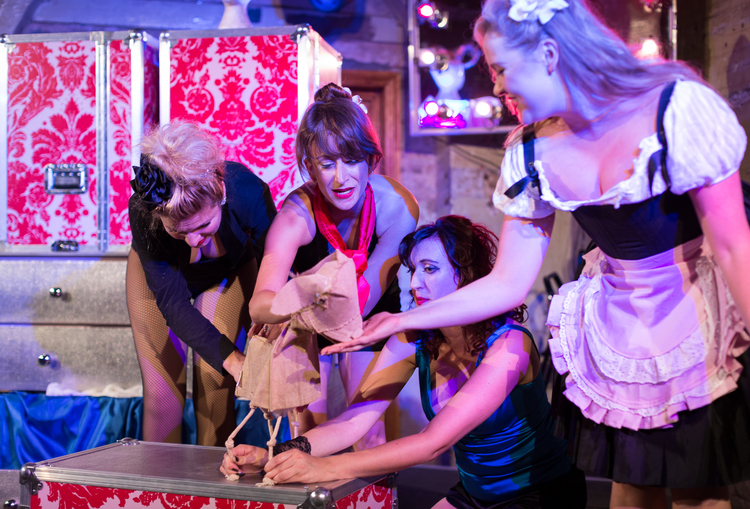 Theatre Bubble: What advice would you give to someone wanting to make cabaret-style performances as opposed to traditional theatre, if they wanted to break from naturalism and form a cabaret group?
Susanna: I think we’d say, just forget rules. Because I think when you start to genre-fy and say ‘this is theatre, and this is cabaret’, you start to feel kind of restricted and actually it’s about going ‘f*** it’. It’s about being experimental, I think. Cabaret is defined differently by different people. Actually, it’s about breaking the fourth wall and being like, ‘What would happen if I did that?’

Susanna: We learned a really good lesson from a director we worked with a few years ago, which is actually that one of the most generous things you can do is be vulnerable, to tell the truth. It’s about thinking about that as an act of generosity – I’m going to give you this piece of myself and you’re allowed to laugh at it, or cry at it, whatever you feel like. For instance, in Bluebeard, we are four thirty-something women wearing bridal dresses at an age when many women are very self-conscious about being married or not married!

Theatre Bubble: Last question – what is your process when you’re starting a new show?
Susanna: We’re still on a kind of journey with that, which I quite like. Every time we go into a room we’re like ‘Okay, how are we going to approach this?’ And actually this time we started off with loads of workshops so we just took our time. This show’s been eighteen months in development.

Jessica: For any budding theatre makers out there, take your f***ing time!

Susanna: So prior to receiving Arts Council funding we just got together at weekends with our director and we just kind of had workshops, and we brought in stimulus and we brought in music and we brought in poetry and props. We just really interrogated ourselves as writers, we interrogated the themes we were interested in at this point in our lives. We came up with this particular theme of control, and then it lead to a book and then it lead Bluebeard. But it actually came from ‘what is pertinent for us now in the room?’. But it was really nice just having these weekends to spread out over the year.

Jessica: And then we decided to go for it – we got this idea and we applied for Arts Council funding and we got it!

Susanna: We were able to have a proper two weeks development on it to write it and rehearse it. Thematically, we went to the music, and then we went to the story. But other projects have begun other ways.

Jessica: But all shows usually begin with what we are most interested in at the time.