Review of: If We Got Some More Cocaine I Could Show You

If We Got Some More Cocaine I Could Show You How I Love You is a titanic success for Off-West End theatre - a small yet vibrantly humming piece.

Fringe fatigue must be a diagnosable condition for theatre critics. Coming out of 20-30 black box spaces carefully perched somewhere in Edinburgh has few positive effects on the reviewing art – shows can meld into a seething mess of partial innovation and, unfortunately for the most part, bland normality. Trekking back down south therefore and returning to the confines of London’s thespian world can sometimes be a daunting process – can you ever find the magic again after such an intense month of theatre? Thankfully, and in a large part due to the endeavours of If We Got Some More Cocaine I Could Show You How I Love You – the answer is a resounding yes.

We enter the intimate space of the Old Red Lion to a rooftop – painstakingly crafted by designer Georgia De Grey – complete with guttering and a weatherworn chimney. From there, our two performers clamber out of unseen windows, police sirens flashing from ‘below’. We stay with the pair – Casey and Mikey, alone on that rooftop – for a solid hour of mesmerising, heartfelt theatrical wonder.

John O’Donovan has crafted a sublime piece here. Slowly the lives of Casey and Mikey uncoil with melancholic inevitability – exploring the pair’s upbringings between Croydon and rural Ireland, their difficulties dealing with their own identities, sexualities and familial relationships. This is character theatre done properly – by the end we are left with a resoundingly moving portrait of modern youth – trapped, isolated on this solitary rooftop. The symbols are there but never hamfisted-ly presented. 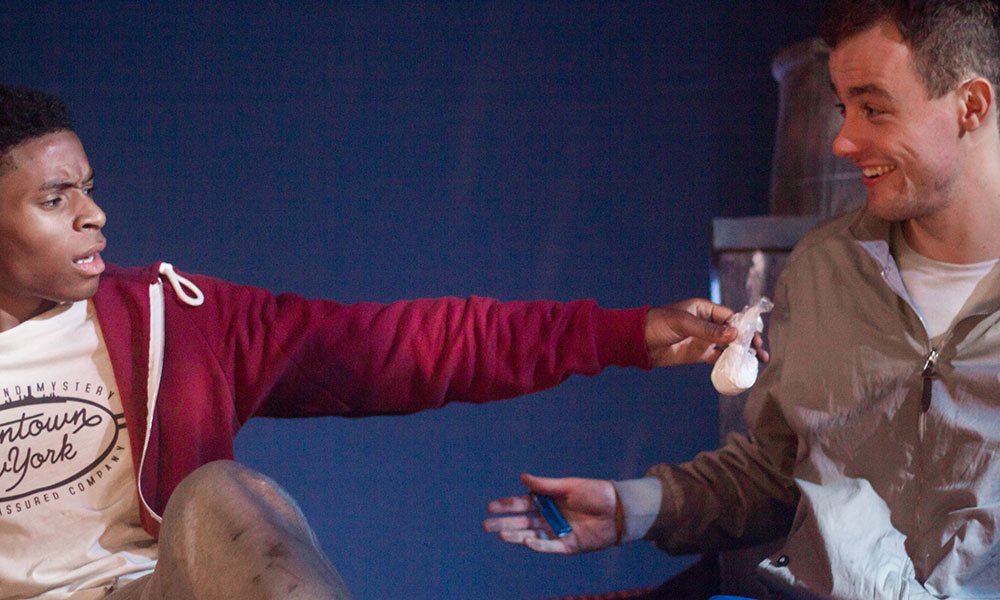 The show, positioned in perpetual isolation, could not have worked without the strength of the two performers. While Ammar Duffus brought an intrinsic discomfort and doubt to Casey that gave his story and upbringing a sense of natural sadness, it was Alan Mahon who here crafted a fantastically original character in Mikey – a man so assured yet so lost, capable of presenting such confidence while also exposing the young man’s flaws. Certainly an actor to keep on the radar. Seeing the two come together was a magnetic experience – both their attractions and conflicts harrowingly beautiful.

Thomas Martin has done something incredible here – taking such a small face yet never for one second allowing the piece to feel overly static, aided by the twists and dry humour of O’Donovan’s scripts plus a major support in the form of Derek Anderson’s lighting, conjuring the idea of the houses, communities and individuals a few stories below. .