Review of: Good Canary at the Rose Theatre

Questions of eating disorders, drug consumption and overriding mental health issues do not seem to sit readily on stage beside discussions on the nature of authorship, publisher success, or the literary industry in the modern age. Both are huge, hulking topics, with nuance and depth that need to be properly examined and treated if they are to succeed. In that respect, Zach Helms’ 9-year old Good Canary, making its UK premiere at the Rose Theatre Kingston, gives itself a tricky route to navigate, one that is never made easy for either director John Malkovich or the cast, headed by a two-hander from Skins-alum Freya Mavor and Game of Thrones-victim Harry Lloyd (his death sequence still taking gold in every competition).

Annie vomits – a lot. She eats infrequently and survives on a huge batch of speed. Her husband, Jack, has his name attached to the cult literary sensation of the year, catapulting him into a world of entitlement, literary prowess and 7-figure advances on subsequent novels. As Annie’s psychological state deteriorates, Jack has to grapple with the reality of his world, the prospects for the future – not realising how desperate the situation truly is. 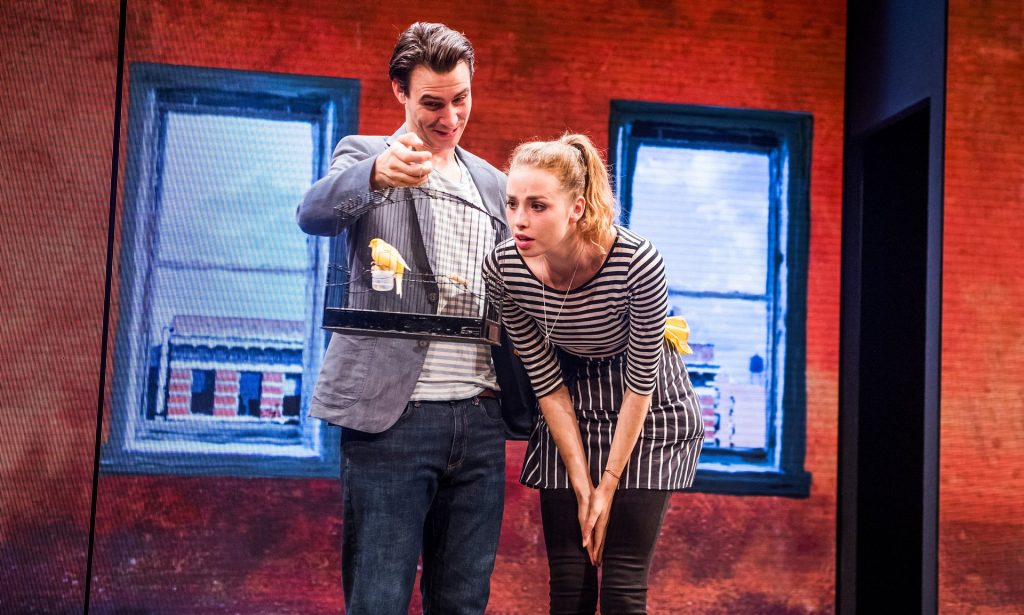 For a plot so dependent on weighty, intricate issues, it is Mavor and Lloyd that really pack the necessary punch to keep the show moving. Mavor in particular as the brilliant, innovative forged figure of Annie delivers a stellar performance, one that will invariably promise great things. There is a conviction in her dependency, a realism to her mental health issues, conveyed a normality so often unavailable on the stage. Lloyd as the husband Jack, the intrepid writer on the cusp of fame, is equally a relatably flawed individual, charismatic when necessary yet often capable of making the wrong decisions. His slightly awkward gait, and the way his American twang spat out his wife’s name, all were considerably effective.

There was certainly a great deal made from the fact that this was Malkovich’s directorial debut, but the renowned actor has certainly created a slick, smooth production that rarely relents from getting the audience’s attention. Malkovich’s blocking is fluid, with a few stabs at innovation (particularly in a phone call sequence, and another scene where the lines are projected onto the back wall rather than spoken). The projection itself was rather nicely used, particularly during Annie’s reality bending episodes, and designer Pierre-François Limbosch’s use of mechanised stage dressing is a welcome departure from the norm. A couple of moments almost felt slightly too neat – the transformation of a window into a bottle of pills, or the ghoulish figures that appear to Annie during a dinner party in the heights of New York. That said, the direction and design hit an exact sweetspot during a final scene, when a certain character is dragged offstage, as if controlled by the same mechanised system that controls the ebb and flow of tables and chairs. Actors and characters come and go as if nothing more than the minimalist chaise longue.

Helm’s script is by no means perfect – sometimes dramatic revelations can feel hamfistedly delivered when a more subtle approach could have sounded less jarring, and the two central themes of writing and drug consumption never feel both suitably satisfied by the play’s conclusion. Equally, some of the supporting roles feel entirely functional as opposed to dimensional figures – all different parts of the same vehicle that drives Jack and Annie to their conclusion. An unsatisfying consequence for a show with some real strength.