Review of: The Enchanted

’The Enchanted’ is an impressive piece of physical theatre that tackles one of the most difficult subjects there is with aplomb, delving into the minds and backstories of prisoners on death row while combining dance, puppetry, monologue, several very tricky characters to portray and a strong, simple set

’The Enchanted’ is an impressive piece of physical theatre that tackles one of the most difficult subjects there is with aplomb, delving into the minds and backstories of prisoners on death row while combining dance, puppetry, monologue, several very tricky characters to portray and a strong, simple set. Some laboured elements and performances kept it in the realm of amateur level theatre, but flashes of brilliance showed promise for an emerging company.

The physical elements of the piece were among the most engaging – several of the company appear to have been dance trained and they used these skills creatively and excitingly. The cast moved around large metal cage-like structures containing various personal objects, miming simple movement throughout scenes and danced, keeping the stage constantly busy and visually gripping.

This never-ending movement, however, sometimes clouded the depth of certain interactions – moments that could have benefitted from a more naturalistic approach, perhaps demanding some more respect for the characters’ plights. I felt no connection to the main investigator character, known only as ‘the lady’, and though I could see significance in being made to feel more connected to the prisoners than to her, unveiling their often glossed-over stories and questioning their identities as monsters, her narrative took too many overly-broad twists and turns for her to be such a stylised presence. The end of the piece saw her happily romantically involved with a fallen priest, another slightly confusing and two-dimensional character, which seemed incongruous with the tone of the rest of the show and detracted from the haunting nature of the prisoner Arden’s final monologue. 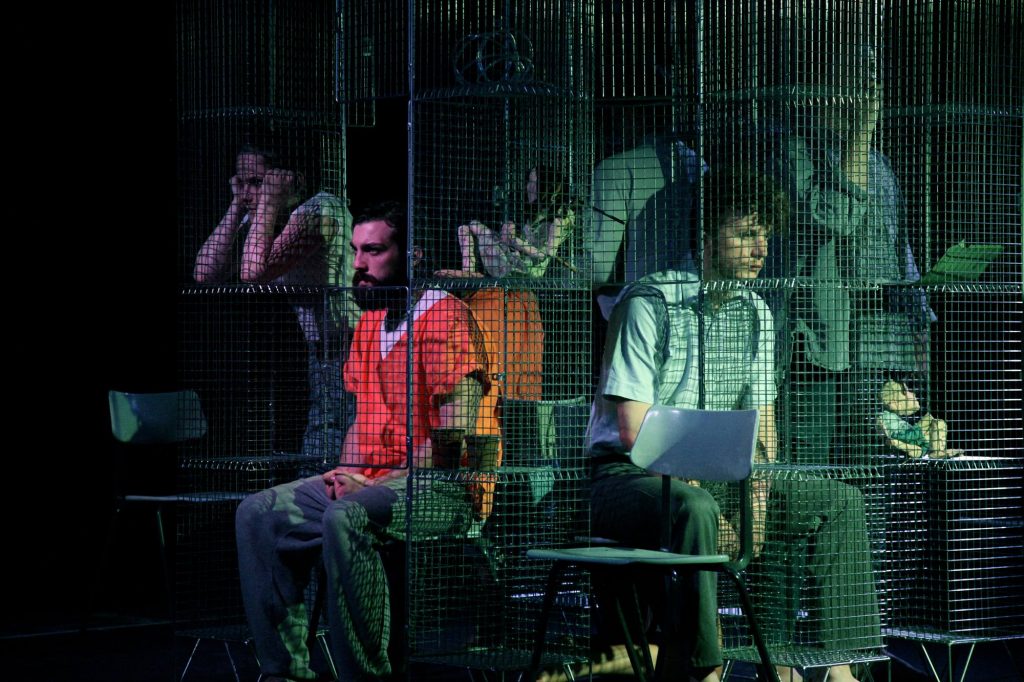 That being said, the conversations between the investigator and the prisoner York were perfectly pitched, and the performances from the two primary prisoners were truthful and harrowing. The use of fragile, child-like puppets from time to time was heavily striking and hard-hitting, taking the prisoners out of their orange-garbed bodies to different times and identities, aiding us in seeing them as something more than monsters: vulnerable people with pasts and problems and childhoods that still live on within them. ’The Enchanted’ could be something truly special if every aspect of the production were treated with the same sensitivity.

Pharmacy Theatre are a young company, and generally this ambitious production came off well; though some performances had a distinctly ‘studenty’ feel, slightly dampening the atmosphere of professionalism. Some sections were better executed than others, though the piece was full of good ideas and had a lot of heart. At its core this was a sensitive and moving exploration, and I am hopeful for Pharmacy’s future projects.