An inspired, intelligent but overlong production from Thomas Ostermeier's Schaubühne Berlin Company, which explores theatricality in portraying the perverse tyrant's rise and reign.

In my review of The Toad Knew, I claimed that artistic indulgence was the raison d’être of the Edinburgh International Festival. In that production, this manifested itself in a gargantuan, complex set and spectacular visuals. In Thomas Ostermeier’s Richard III, we are treated to a mammoth, marathon remix of one of Shakespeare’s darkest works that runs to almost three hours without interval. This is theatre-as-endurance test, both for actors and audience. This is no accident – Ostermeier allows his audience no escape from his hunchbacked antihero, who insinuates himself under the skins of all in the auditorium, onstage and off. 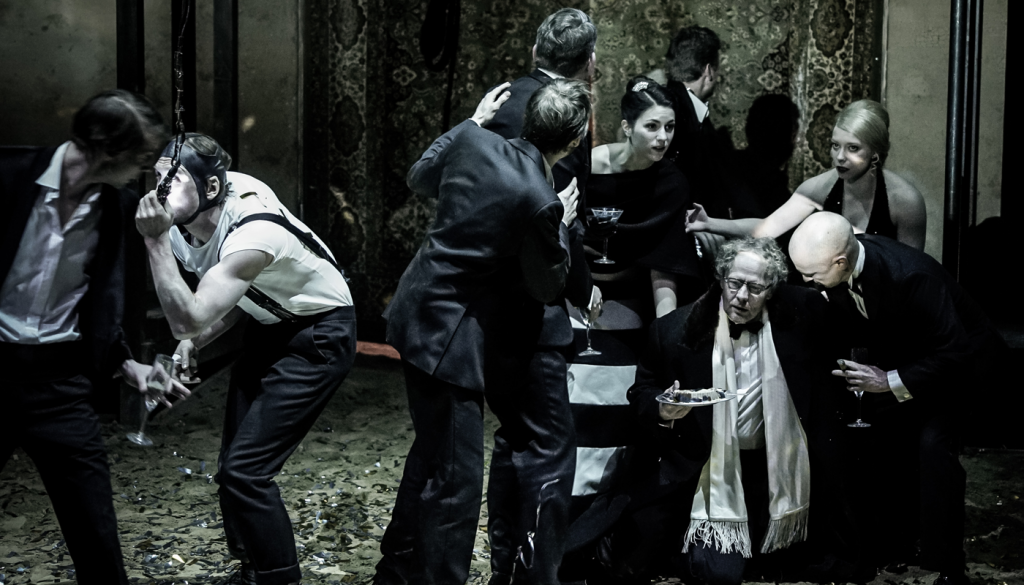 A review of any production of Richard III will inevitably focus on the central performance, and Lars Eidinger’s performance as the perverse would-be tyrant dominates. Speaking into a microphone that swings from the ceiling like a wrecking ball of destruction (he himself at one point in the production using this bungee cord to propel himself into the set) he is part wrestling commentator, part rap star, part stand-up comedian. However, for a production that mines the comic potential of Shakespeare’s script (and of improvising around it), Richard is curiously unfunny for the early scenes. Instead, the soliloquies delivered between these early sections are reduced to exposition, at which Richard III as a play does not shine. It is not until the seduction of Lady Anne, where Eidinger strips entirely naked except for his hump, that the play and protagonist warm up and provoke the audience’s complicity through laughter.

From here, Ostermeier successfully shifts gear into anarchic farce, with the theatricality of Richard’s fictional rise and reign given full expression. This is a clown king, improvising freely with Shakespeare’s speech. He exits one scene midway when interrupted by fireworks, entering again having missed his cue. After rejecting Buckingham, smearing food all over him, he descends into the audience and goads them to sing mockery with him. He is the uncontrollable vice of medieval theatre, out of the control of theatrical convention – I feel for whoever manages the surtitles when Eidinger is on stage. 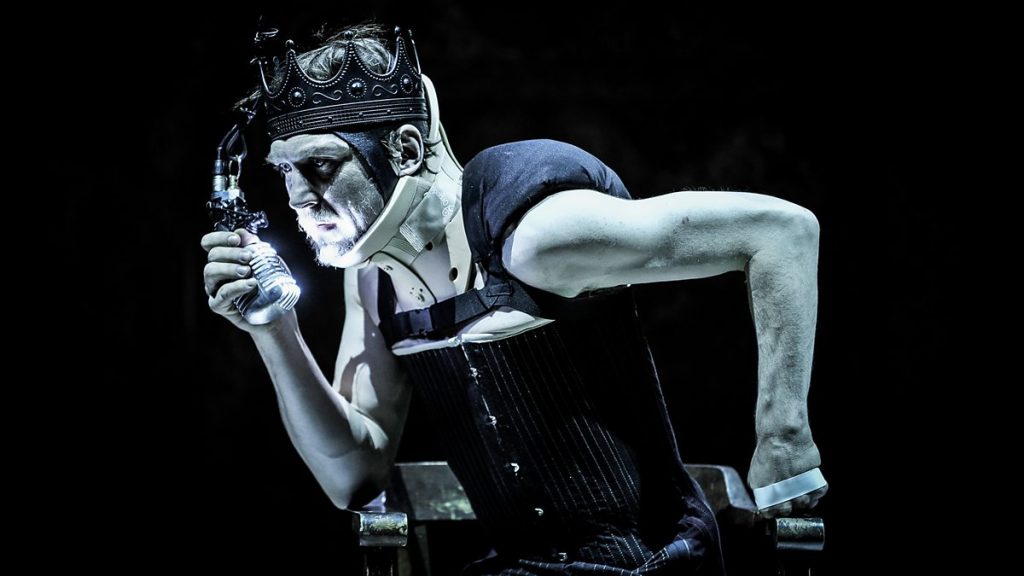 This production is upfront with its playful theatricality when, as Richard strips for Anne, he displays his fake hump and removes his clownishly oversized shoes to reveal his non-deformed body. Costume and costume changes become a visual indication of Richard’s chameleonic shifting persona – as king, he attempts to correct his posture using a neck brace and a corset. Spreading sour cream over his face gives him a ghoulish clown-mask, more theatrical monster than man, as he corners his sister-in-law and demands his niece’s hand in an electric scene. The play is a psychodrama that he creates, and then is trapped by. MC-like, he cues the excellent jazz-drum score from Thomas Witte. His reign is underscored by a repetitive tone that begins to sound like a dead laugh. His microphone projects his face, gigantic, on the wall behind him in his most vulnerable moments at the end of the play. It is from this microphone cord that he hangs, meat-like, after his climactic fight with Richmond which is depicted as a solo mime. This moment was discovered when Eidinger was rehearsing the fight choreography alone, and is a bold choice that is a fitting (and thankfully economic) conclusion to a metatheatrical reign.

As a play Richard III is often hampered by a weak supporting cast, but fortunately this is not true here. Eva Meckbach holds her own as Elizabeth against Eidinger in the aforementioned scene, although her role is radically reduced here. Thomas Bading is brilliant and utterly unrecognisable in his triple roles of Edward IV, the Lord Mayor and the Second Murderer. His lament over the death of Clarence stands out as a powerful highlight in a slow first half. Sebastian Schwarz is a believably banal middle man as Hastings, and Moritz Gottwald an inscrutable, spiderlike Buckingham who crawls up the fireman’s pole as if it were a drainpipe. His stillness after his messy rejection, sung at by the more easily swayed of the audience, is spellbinding.

Instead, the production’s fault is in its pacing. At its close I almost gave a standing ovation simply to bring the blood back to my legs. This is an issue beyond length, however, and more to do with the shape of the piece. Each scene is given equal space to breathe irrelevant to its importance. Despite an already considerable runtime, some scenes drag and others are not shortened to compensate. It seems almost creative hostility to include moments of complete stillness and silence when the play’s pace is this leisurely elsewhere. This problem is not helped by lengthy scene changes, often it seems for little more than a costume change for Richard, where we are subjected to yet-another symbolic projection which does not tell us any more about the nightmare we are trapped inside.

This is an extraordinary production of Richard III, and I doubt that I will see a finer. However, it is as criminal as its king in regard to its pacing, which prevents me from recommending it wholly. However, this verdict will not be shared from those who contributed to its near-unanimous standing ovation.