Review of: My Eyes Went Dark

“When we tell our stories, when we listen to others’ stories, we are practising a form of acceptance.” This memorable line particularly shines in Matthew Wilkinson’s tense two-hander exploring forgiveness and acceptance in the aftermath of a tragedy, as well as our ability to empathise as spectators in both the theatre and the public sphere. A Russian architect loses his wife, son and daughter in a plane collision. Searching for justice and frustrated by the refusal of everyone else to assign responsibility, he decides to take the law into his own hands. 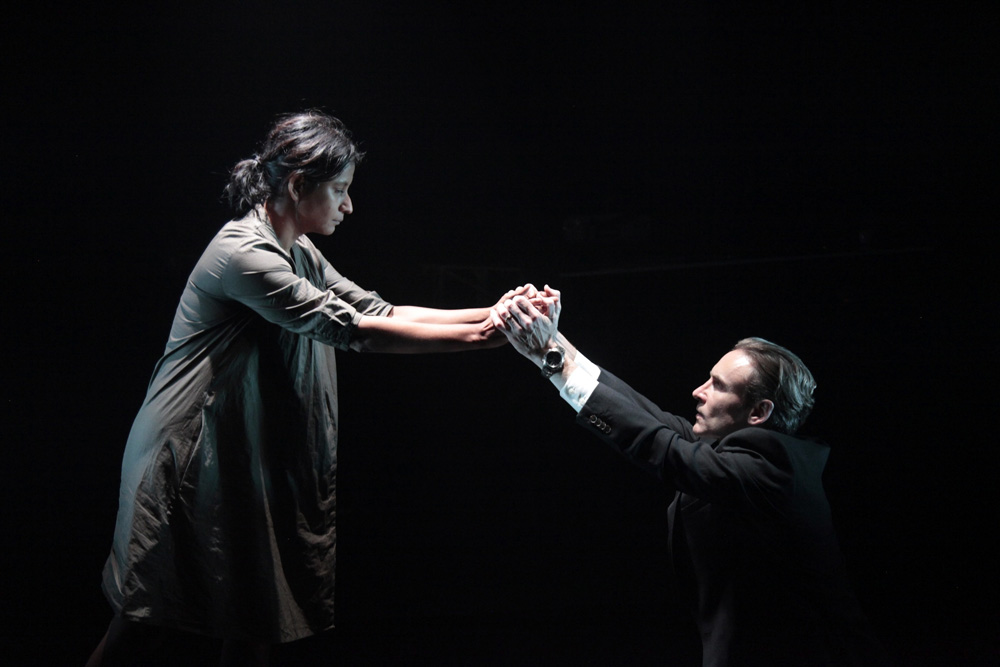 Cal MacAninch has drawn the most attention for his performance of Nikolai Koslov, the wronged and then wrongdoing architect. Inscrutability itself, his enigmatic performance gives nothing away. More revealing is the care he shows in his evocative mime work. The heaviness with which he carries his daughter’s corpse is breathtaking, sensitive work which tells us more than he ever does himself. This is a performance that we never quite see inside, and which is all the more compelling for it.

However, MacAninch is undoubtedly outshined by the extraordinary Thusitha Jayasundera. Playing every other role in the production, from Koslov’s wife Marya, to a young child, to Koslov’s distraught sister-in-law, her shifting selves are utterly uncanny and brilliantly drawn. A particular highlight is the wife of Koslov’s victim – through which, the central paradigm shift of the piece is told through a vivid monologue of domestic banality. This is the best performance I have seen at the Fringe, and potentially the best multi-roleplaying I have seen in the theatre to date.

Jayasundera’s versatility helps to imbue an uneven script with a more significant meaning. Her ability to become anyone is crucial to the play’s tension, as who she becomes will determine where the plot goes next. When Koslov becomes paranoid about retribution, his fears are well founded or at least felt equally by the audience, as everyone has the same face. Jayasundera’s performance and Wilkinson’s direction create a purgatorial psychodrama where Koslov will never escape his wife or his victim – as he tells a fellow victim, “I see Marya in everyone I see.” This is reflected in a script which subtly shifts in time and perspective whilst maintaining a delicate structure of symbolic motifs.

The play has its flaws – there is an especially slow first act, and Koslov’s inscrutability becomes alienating in the script’s weaker moments. However, the piece is elevated by its powerful performances – especially Jayasundera’s star turn as a one-woman ensemble.