A very confusing if rather beautiful modernisation of Strindberg's famous play.

Without bigging myself up too much, it is rather rare that I come out of a production quite so nonplussed as I was with dreamplay. There were loose trappings of plot and some truly spectacular individual moments, but when considered as a whole the piece grew as murky as the underground vaults in which they were performing. This piece was a reaction to the famous Strindberg dreamplay, however it’s main problem being that it had to be considered parallel to the original in order to make sense or have some kind of message. Those (like me) that aren’t familiar with the 1907 text were left completely in the dark, I had to do a rather embarrassed mid-show-Wikipedia-lurk to locate myself in the action and start having any sort of opinions about the piece. The issue with plays like this is that, without the pre-existing knowledge of the earlier text, the spectators do not start in the same place as the performers do, and therefore can never be expected to end where they are meant to. 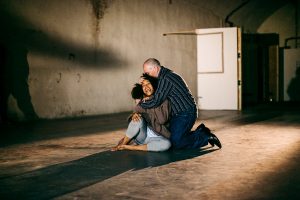 Having said this, there were moments of true brilliance that peppered throughout. One of my favourite sequences was a clowning sequence in which a demonic Michelle Luther was being controlled by a rather sadistic Laura Moody on the cello – the switch of power between Luther and Moody was truly electric. However, as with a large numbers of these sketches, I’m not quite sure what exactly it was doing there; it felt like there was no underlying connection or choice as to why they decided to do this section in this style apart from the fact that they thought it would be fun. The link between this and the rest of the piece was missing, thereby rendering what was a fantastic sketch rather useless.

However, once casting the audience as Strindberg’s version of Agnes, there is a odd sense of us being there for something – we are witnessing the sorrows and loves of the people we are there to watch. The problem is when we are switch in and out of this role – audiences are in general rather simple being and having one role is quite enough for us, thank you very much. Giving us the role of witnessing this sadness before introducing a real ‘Agnes’ means there is no one idea underlying this piece from the spectators’ point of view.

I realise I’ve spent a lot of this review pointing out the issues I had with this production – however, I feel a lot of the point of the piece was there to stimulate this debate. I wouldn’t be surprised if the production, reading this, felt glad I was nonplussed – after all, what is theatre for if not to stimulate debate? If not to make you talk to fellow audience members during the production, chatting about the meaning until you’re both distracted by a scene? The audience felt as a whole, equally enjoying and confused by the show, connecting the people involved far more than a usual show. And, surely, that is why Agnes was reborn – because these moments unite us, unite us in a feeling and an appreciation of what the pain and the love of the human race is for.