Heartwarming if slightly clunky story about a man forced to live with his mother-in-law after his wife's early death.

The main impact of Broken Strings lies in its premise – David is forced to live with his wife’s mother, the steely Rose, after his spouse’s early death from an unnamed disease. Gently heart-warming, this piece does occasionally struggle due to excess sentimentality and some slightly clunky sections, but ultimately succeeds due to the simple generosity of the story being told. 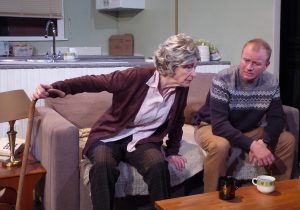 The play covers two years after Susan’s death in small snapshots, often with months passing between scenes, moving from the day after her funeral right until when Rose convinces David to feel free to not feel guilty living his life without her. Some might say that the fact we can predict the direction the narrative will take from the off subtracts from the play, but I entirely disagree. This isn’t a piece based on plot twists and turns, but is rather a relationship study based on the concept and experience of common grief. Plays so often start with a simple idea like this and then stray from it in trying to be special and different – it’s very refreshing to see a playwright dedicating themselves to analysing one particular theme and not allowing themselves to be distracted from it.

The production values were consistently strong, with the set itself providing a lovely contrast between the slightly oppressive kitchen-dining area onstage and the old rickety red chairs of the auditorium. Normal first-night slipups provided some rather entertaining moments, such as when a conversation about ‘not having enough bread for toast’ was slightly undermined by the very obvious presence of a loaf in the bread bin just behind where Steven Arnold was standing. The nerves of the two actors were also quite visible in the first 10 minutes, as the play struggled slightly to get off the ground with some quite clearly anticipated lines. However, once the duo got into the swing of it and the pace started to pick up, both Arnold and Linda Clark gave some wonderfully varied performances. Clark really brought out the tender aspects of her usual crotchety character, while Arnold provided a more than solid counterpart in the role of frustrated widower. Neither outshone the other and it was very clear that this was an excellent pairing, both actors working wonderfully off each other and reaching some quite exquisite moments of true emotion.

The writing itself was mostly solid, but dragged very slightly by the end of the piece, especially seeing as there seemed to be two climaxes in the play – the first one after their first Christmas dinner by themselves and the second when Rose convinces David he’s allowed to continue living his life. Nevertheless, Joe Wenborne has still managed to create a gently moving and heartwarming piece – not the most explosive piece of theatre you will see this year, but one of the most generous.