Review of: Britten in Brooklyn

Enthralling yet stunted in certain areas, Britten in Brooklyn just about succeeds despite some significant flaws.

Wilton’s Musical Hall is the epitome of anachronistic architecture – existing like some forgotten building, trapped in time among the modern innovations of Shadwell. The seemingly ideal setting for Britten in Brooklyn, a show dedicated to the life and lifestyle of composer Benjamin Britten, exiled to New York for a bout of Bohemian squalor in the run up to the U.S. involvement in the Second World War. From there we see two years of anxiety and artistic angst, in one of the most unusual episodes of the composer’s life, here retold with some measure of success though with no shortage of problems. 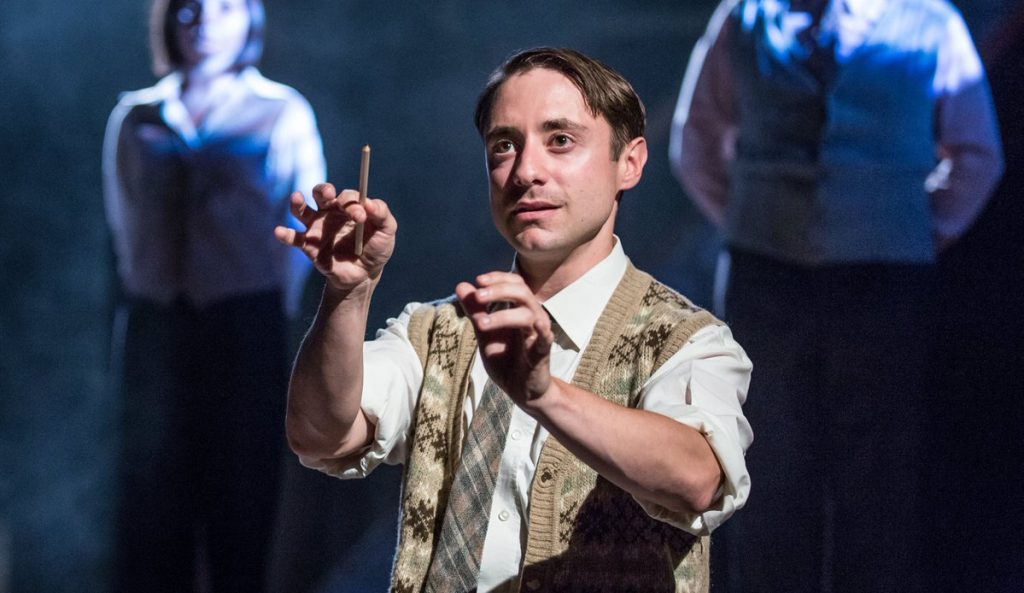 Writer Zoe Lewis has certainly found a fascinating period to write about – a great shack-up between Britten, W.H Auden, Gypsy Rose Lee and Carson McCullers. Seeing the four institutional greats parading across the stage felt almost like a less exuberant sequel to Allen’s Midnight in Paris – the artist visited within their own context rather than extricated from it. Britten and Auden’s relationship is ripe for theatrical depiction (Alan Bennett having seen to that relatively recently), and the whole time period is an enthralling one – here are artists morally opposed to the Second World War, mourning the US involvement and glibly asserting how easy it is to sympathize with Hitler – tantalizing food for thought, asserting a revisionist interpretation of a period that is so objectively depicted. Taking this further, as Lewis teases, brings forth even greater questions – we often see art as a champion of those in the right (to the extent that Auden and Britten are now 20th century darlings) but why do we so quickly sweep under the carpet those moments when these figures apparently ‘got it wrong’? Here are lauded individuals arguing, fighting against the general consensus – for that they are worth our time.

Given all of this circumstantial and contextual excitement, it’s a shame to see the show saddled by poor execution in other areas. This is a domestic, romantic plot that is often obsessed with protracted and vague spiels. Lewis’s text seems overly drawn out, dabbling in half hearted romances that either needed a far greater investment or no mention at all – the play could have existed as a punchy and exciting hour rather than a laboured two act piece. It is Britten and Auden’s relationship that stands out as the vibrant highlight here – the Brits and the boys getting a far better deal as they confront the realities of their lives away from home. The arrival of serviceman ‘John’ to bring Britten home really pushed the show into bold new territory, albeit momentarily.

Again on the acting front it is the men that hold all the cards – Lee and McCullers reduced to more supporting positions. Ryan Sampson’s Britten is marvellous central figure, wracked with guilt at his mother’s passing and consistently drawn back to thoughts of home. John Hollingworth provides an equally enthralling and tenacious Auden, here propelled by a sense of self-vindication. Sadie Frost, despite receiving the star billing, seemed somewhat ineffectual – channelling perhaps more of a Monroe than Gypsy Rose character, and her ultimate choices at the end of the play never held any gravity. Director Oli Rose could have done well to move some of the floor-bound scenes further upstage – frustratingly obscured to those of us at the back of the auditorium unable to see certain passages.

There may have been Britten in Brooklyn but there never felt like an ounce of Brooklyn in Britten – the parties, the atmosphere all apparently lost in the looming rafters of Wilton’s, only hinted at but never contributing to the overall timbre. There were some wonderful character moments and Lewis must be applauded for her tireless commitment to the historically pertinent saga, but it all felt dulled by how unevenly this came across. A final compliment must go to designer Cecilia Carey – creating a Bohemian fetishist’s dream with empty canvasses and ornate bathtubs, nestled comfortably in their ornate setting.