From the flat and windy landscape of Aldeburgh, Elinor Cook talks to me about her most recent play Pilgrims, a show about mountaineering. Strictly speaking, it’s not a new play. Written in 2012, Pilgrims has had a long journey to the stage: along the way for Cook, there have been workshops, a George Devine Award in 2013, and an increasing number of major productions. So – a busy journey from page to stage for Pilgrims. “It’s been a long genesis for this play,” she says brightly. “It’s gone through many permutations.”

The play as it stands now, receiving its premiere at Hightide this week before moving on to the Yard Theatre and Theatr Clwyd, is an investigation into the relationships between men and women, who gets to tell stories, and why. “I’m kind of obsessed with the way men and women interact both romantically, professionally, and the way power works in those relationships,” Cook muses.

But this story, far from an ordinary boy-meets-girl, is told through the lens of a climb up a mountain. “As the play progresses you realise it’s a meditation on men and women and relationships, and particularly it’s about storytelling, and who gets to tell stories. Who are the people who author those tales?” she says, interrogating the themes of her own play. “Who are the people who don’t get to tell their tales, and why is that?”

Although actually scared of heights and “definitely not someone who would voluntarily climb a mountain”, Cook’s use of the mountaineering men adds a fascinating dimension to the themes of the play. “I love writing about landscape, and so I was really drawn to this idea of putting these characters in this really extreme, stark, bleak landscapes,” she says. “Because immediately, you put them up a mountain and you can’t help but have really high stakes.”

It’s an intriguing concept, and Cook, bubbly and friendly as she talks on the phone over the noisy Suffolk wind, eloquently articulates her confident concept of Pilgrims, clearly the product of her talent as a playwright. Since her first ever reading at the Royal Court Young Writers Festival in 2006, Cook has, as she puts it “slowly but surely crept up the echelon.” Although she has been writing for ten years now, with recent productions including plays at the Gate and National Theatre Connections, Cook described 2016 as “probably the first year that I’ve been properly busy and had a good amount of commissions and productions happening.” 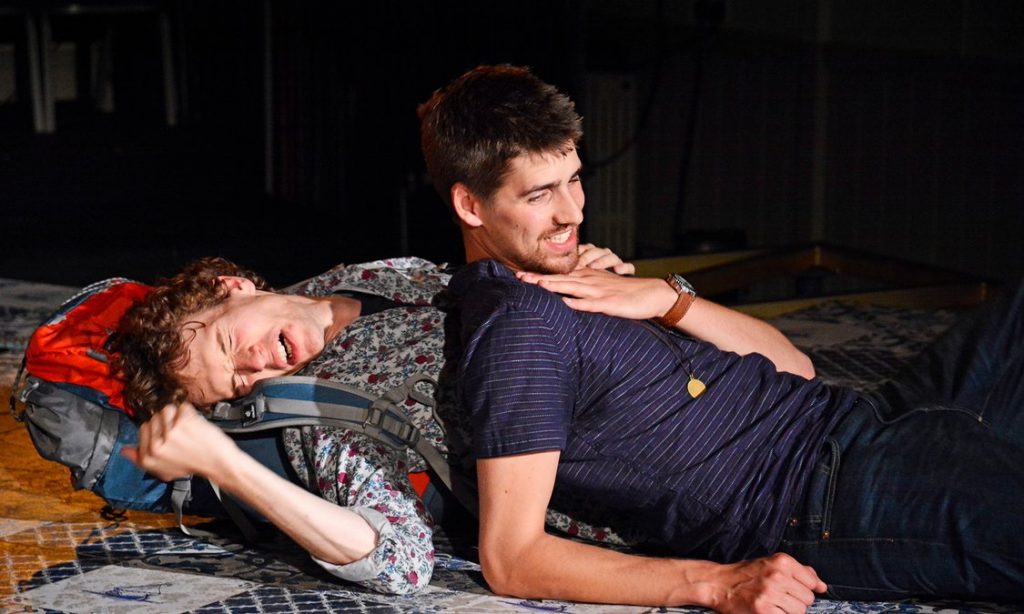 This is the second play Cook has had performed at Hightide, the other being The Girl’s Guide to Saving the World in 2014. She describes the festival as “completely delightful” with a tells me that she has even managed to fit in a swim in the sea with her cast. But, she adds, Hightide isn’t all fun and games. “The work that’s being produced here is pretty daring and unusual. It isn’t just stuff to make people feel good about themselves; it’s especially artistically challenging – which, for a lovely festival by the seaside. it could easily not be.” When I speak to Cook, Pilgrims has just had its first preview, and she seems excited and enthused by the conversations the play has managed to strike up at the rural festival.

If it has taken Pilgrims four years to get from its first draft to up on its feet, it hasn’t been four years spent tucked away in a desk drawer. Cook details the extensive workshops and revisions done on the play, led by the show’s director, Tamara Harvey. “There’s no one else I would have wanted to direct this play,” she says of Harvey, praising the way she has let the production of Pilgrims become “so organic and free” in performance. Cook acknowledges her own complicity in allowing her male characters the control over the stories, something that has definitely changed since.

“In a funny way, even though I felt quite angry when I was writing it initially, and was annoyed that these men were getting the best story and all the adventure and excitement, I was also buying into it as well,” Cook says. She notes that over the process of refining the play, she realised she was allowing the female character in Pilgrims be “the classic reactive, responsive female character.”

Cook describes how the ownership of the story is fought for by the female character, attempting to wrestle it from the men. “Although the story starts off in their hands, she’s struggling the whole way through the play to get agency and become the protagonist.” This has changed the tone of the play, which Cook is now in “a much more complex and quite politically charged place” since its being reworked.

It may have taken a little longer than conventional for Pilgrims to be performed, but it doesn’t look likely that that will be the case with her upcoming projects. Cook is booked up right into the new year. She has been commissioned to write a play for Paines Plough’s 2017 Roundabout season (“Don’t ask me what that is yet because I couldn’t tell you, I don’t know!”), as well as an adaptation of children’s book Extra Yarn for the Orange Tree’s Christmas show, and another commission for the Gate and Warwick Arts Centre.

“That’s going to take me up to the end of the year, and into next year, so that’s a really nice position to be in,” she says positively. Although Cook has some great shows coming up, she seems so humble and happy just to be doing the projects at all. When I remark that she sounds all set, she responds enthusiastically – “Yeah, yeah!” – before correcting herself. “Yes,” she says modestly, “fingers crossed.”