ROANNA DAVIDSON is one of the original creators of and performers in Glasgow Girls, a musical about seven teenage students who take a stand against dawn raids and illegal deportations of asylum-seeking families after one of their classmates is taken. The show first performed in 2012, with further performances in 2013 and 2014. Following its successful run at the 2016 Edinburgh Fringe, this challenging, inspirational, life-affirming piece is playing at the Theatre Royal Stratford East until Saturday 1st October. Tickets and information can be found here. 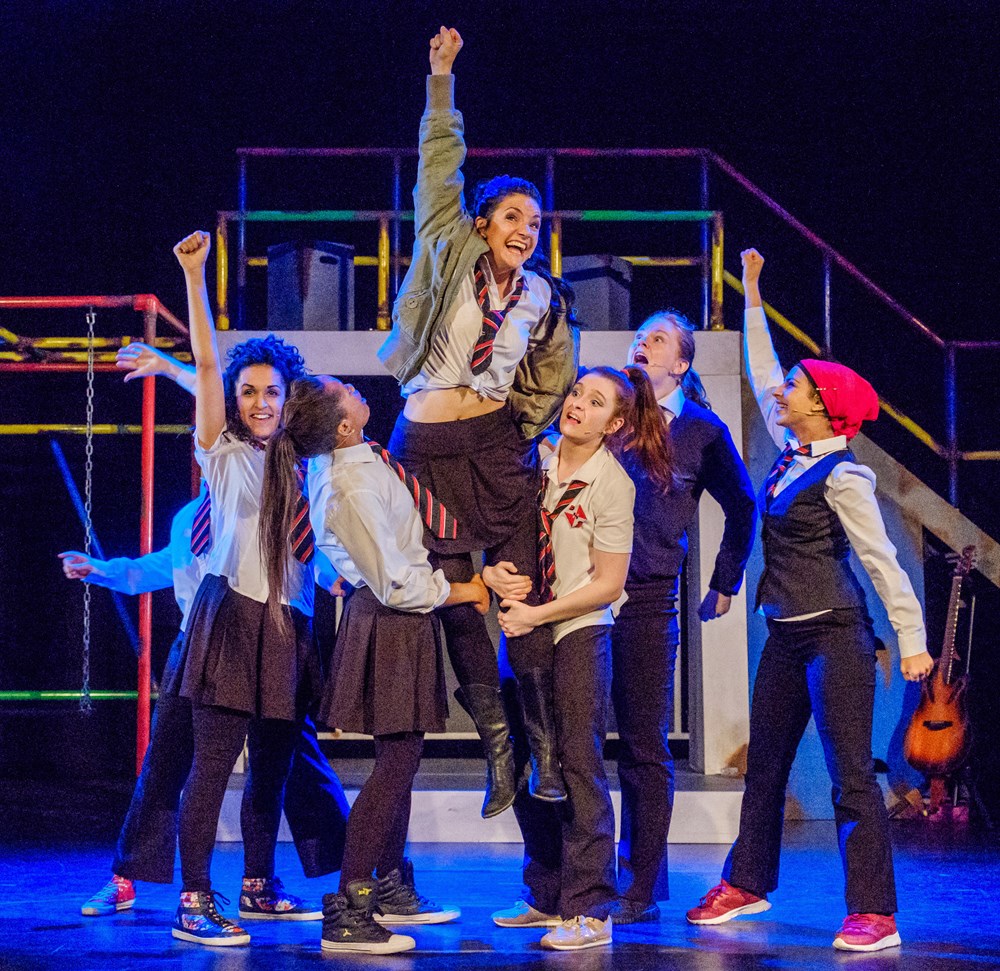 Theatre Bubble: Can you tell me what drew you to this show?
Roanna Davidson: So I’ve been developing Glasgow Girls with Cora Bisset (who won the Amnesty International Award for this piece) for about five or six years now. Initially, they came to look for a girl who was a Roma Gypsy, and I was working with a Roma Gypsy company, so I got involved really early on in the process. I’ve seen the show evolve. When I met the girls and heard about their story, I just thought it was absolutely incredible – this empowering bunch of young women – and it’s a really important piece of theatre to make. And now, with what’s going on in the country at the moment with the asylum seekers, I’ve been proudly watching this show grow!

TB: Can you tell me about the process of taking the real-life people and putting them on stage?
RD: So, because the Glasgow Girls are real people, and while they have their own campaign, the issues raised are still something that’s very very active now. It’s been a very delicate process. We know the girls really well now. I play Agnessa, and Agnessa’s been a great friend of mine. We’ve known each other for about five years now and sort of grown up together. It’s been really lovely, and while other actresses have come and gone there’s still a bond – one of the former actresses who played Amal, the real Amal is now her daughter’s godmother. We’re really quite close. I think that first off, when I was getting the part, I was very aware that I was standing in from of the real person, and some really terrible things happened to these girls and to their families. And we were trying to be sensitive and do the best job that we could. I just turned around and said to Agnessa, ‘I’m not pretending to be you, I’m doing more of a representation of you with as much of your flavour as I can, but I’m really not impersonating you.’ She was incredibly generous with me and she came in – she barely gave me any notes but she was brilliant, she really let me have fun with her role.

TB: Glasgow Girls has been immensely successful with audiences and critics throughout its history. Why do you think it’s done so incredibly well?
RD: I think it’s because it comes from a really honest place. I think because it is a true story, and because at every single part during the process of putting it together we haven’t been precious about bits that we liked as actors or things that are really fun or songs that we think are great just for the sake of being great. You have to honour the story and be as true as possible to the real campaign, and make sure that each piece that’s being used is a tool rather than just entertainment. I think that’s what people particularly like about it. They like the fact that the songs are catchy and the girls have spirit, and the show is entertaining – it’s an amazing ride that you can just be pulled along in. I challenge anyone who does not like musicals to come along to this and see if they enjoy it. It entertains you, but it’s incredibly thought provoking, and I think Cora’s done a fantastic job of staying true to the girls’ stories.

TB: In this post-Brexit world, do you think the show’s relevance has changed, as immigration and deportations are moving to the forefront of dialogues?
RD: I think that when we first started doing this show it had incredible relevance then. The next time we did it in 2014, it was just before the Scottish referendum, so their independence was on the table. The issue was very vocal then, and the show seemed to be bang on the money then about what it means to belong to a certain place, about migration and immigrants, and what it meant to be Scottish. And you pick out different parts of the show then, and you’re like ‘I haven’t heard that bit before’ as it finds its particular relevance now. I think that, with everything that’s going on now with Brexit, the whole of this island can hear the kind of questions that Scotland was talking about in 2014. And unfortunately, with the migrant crisis happening right now and the migrant crisis bordering on hysteria in Calais, sadly, I think this show is more relevant than it’s ever been. There are a lot of lines in the play that really jump out. We did a month in Edinburgh this year, and we had people gasping at the end of the show as we were talking about ‘if everyone thinks like this, then what is going to change’. So sadly, I think that the show is more relevant now than it has been. It is an important show to have, and I hope it gets people thinking about changing their minds.

And unfortunately, as we say in the play, there’s a reason why politicians don’t stand up for asylum seekers because asylum seekers don’t win votes – anything that the media, the Daily Mail in particular, wanted to spin against migrants, unfortunately we’re getting bombarded with that at the moment. Hopefully Glasgow Girls is a really refreshing other side of the coin – it’s presenting both sides and many opinions and it’s just sort of guiding you through.

TB: What would you like audiences to be thinking about when they leave the theatre after seeing Glasgow Girls?
RD: I would like people to question what they’ve thought about different issues – if they read something in the Daily Mail, if they read something in the media, I’d like them to just humanise it a little bit. There are so much information and statistics out there about this mass of people who are moving all over the world – I want people to dissect that and see humans and individuals and make every individual’s story separate. I’d like young people and students to feel empowered by the show – these girls were only 15 when they did what they did, and it’s incredible. They all stood together, and if you stand together you can make a change. The show questions rules, and it questions what can be achieved. We do a disservice to young people quite often I think – there’s a lot of ‘wait until you get out of school and you can do this and do that’ and that’s not necessarily the case. Anybody can get out and make a change. When people leave our theatre they’re generally buzzing and uplifted – all the questions that we’ve been asking them are empowering. And I hope that for the actors and for the creative people out there who come see the show, that they see it as a tool for change. When our director (Cora Bisset) accepted the Amnesty International Award, she said ‘we’re all fighting the same fight using the tools that we’ve got’. I just think that was so bang on; theatre for theatre’s sake is brilliant, but if we use theatre as a tool, that’s when it becomes very powerful and makes a difference in the world.