VANESSA RESELAND plays The Witch in Into The Woods, performing at the Menier Chocolate Factory, in a production that won the 2015 Lucille Lortel Award for Best Revival. The production features the original US cast and runs until the 17th September. Vanessa found time to talk about storytelling and society with Theatre Bubble, as well as her own personal connection to the show. 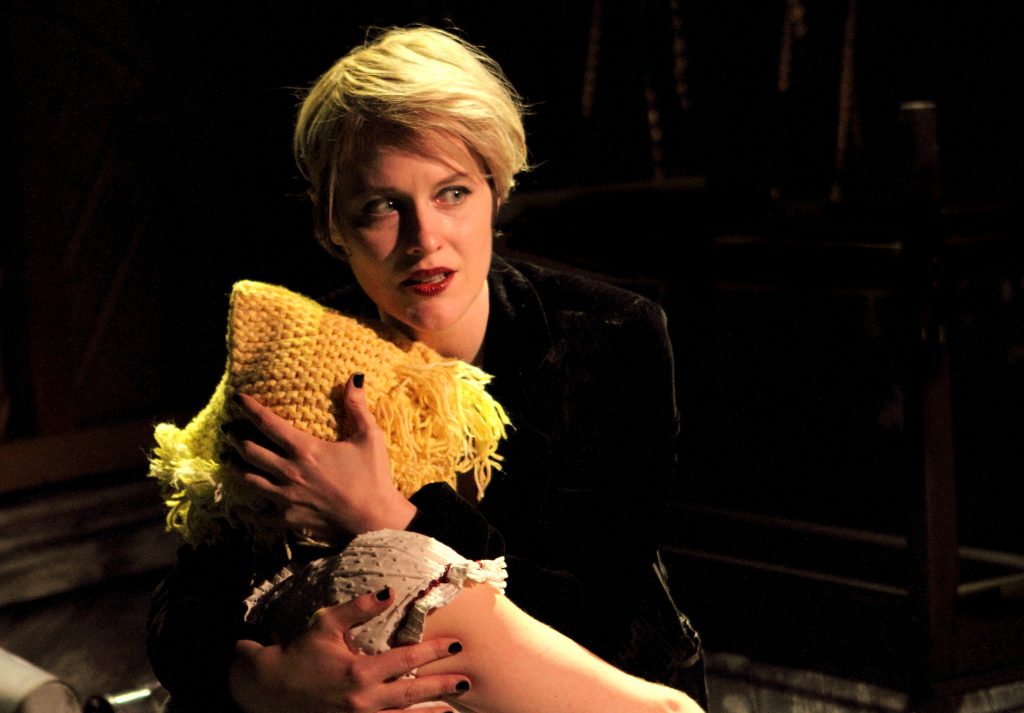 Vanessa Reseland in Into The Woods. Photo Credit: Catherine Ashmore

Theatre Bubble: What originally attracted you to Into The Woods?
Vanessa Reseland: When I was 16 years old, I played the Baker’s Wife in a theatre school production of Into the Woods in Pittsburgh, PA.  The cast was made up of fellow students who are my best friends to this day.  We spent hours after school delving into this work, and I think it helped shaped me as an artist and as a person.  The stories of pursuit, consequence, love, loss, vengeance, personal ideology, and social responsibility all opened our young eyes and hearts to a world of varying points of view.  Something I love about this play is the fact that no one is right and no one is wrong.  You can dig deeply into these characters for an eternity because they are each so fervently pursuing the path they believe to be right.  You never fully get the answer, because the morality questions are as complicated onstage as they are in our daily lives.  Only the best plays ask their audiences to question their own behaviour and their own point of view.  This show asks us to be wary of our actions and beliefs for our sake and for the sake of future generations.  That’s why I got involved in the theatre in the first place.  I believe the only way for civilisation to evolve is to find ways to understand each other individually and culturally.  Grimm’s Fairytales are morality tales on their own, but Into the Woods bring them into a new age.  And…Stephen Sondheim….come on.  Every night, I marvel at the wisdom of his lyrics and mastery of his music, with different lines popping out depending on my frame of mind that day.  He speaks to us all.

TB: The influence of Brothers Grimm inspired and Charles Perrault fairy tales is evident in a lot of musicals such as Wicked, Sweeney Todd: The Demon Barber of Fleet Street and Aladdin. Why do you think they’ve grown so much in popularity recently?
VR: We live in a world filled with questions, and it is human nature to search for answers, for peace.  It seems like the more information we receive via the internet and social media, the more saturated we are with discordance, anger, and violence, but this unrest is not new.  We live in a violent world.  We live in a beautiful world.  I do believe that humankind is more inclined to seek out the beauty over the violence, but it can be a challenge to maintain that confidence.  Fear is usually the seed of what gets in the way.  Grimm’s Fairytales don’t shy away from beauty or violence, and that is why I think they resonate so much with the struggle within us and our societies.  They are a voice of reason, a voice of consequence.  They are teaching tools, and they give us some sense of justice in a world that is, more often than not, quite chaotic.

“Never stop asking questions and keeping your mind open. If you don’t have empathy, get some.”

TB: Into the Woods was adapted into a film in 2014. How does it differ from the stage version?
VR: I never saw the film!  We were in the middle of our run of Into the Woods at Roundabout in New York when it came out, and though I was sad to miss it, it didn’t seem smart to shake up our version of the story by watching actors I admire step into those roles. Maybe I’ll get around to it once our show closes.

TB: Do you think it benefits actors to see film adaptations of plays or do you think they run the risk of their stage experience being somewhat coloured by the film adaptation?
VR: I think it is a terrible idea to watch the movie of a show you are performing!  For me, it is impossible not to let it creep into my performance.  It can feel good to watch and find some validation that you are going in the “right direction,” but it is simply a false sense of security.  Better to trust your instincts, as scary as it can be to do so.  Otherwise, you aren’t expressing something truthful.  It took me a very long time to get Bernadette Peters’ performance of The Witch out of my head.  I watched the video of the original Broadway show so many times, I had every move down pat!  Though it was so much fun as a kid, it doesn’t help me when I’m onstage in this, very different production.

TB: And finally, what would your advice be to people who want to get into the world of acting?
VR: Oh, there is so much advice to give because there is so much to learn, but most of it comes with experience.   Do plays. See plays.  Everyone has their own path and their own strengths, but never stop asking questions and keeping your mind open.  If you don’t have empathy, get some.