DEBORAH ARNOTT appears in Diary Of A Madman, which returns to the Gate Theatre until the 27th September after a month-long run at the Edinburgh Fringe at the Traverse Theatre.

In August, Theatre Bubble editor Alex Wood described Al Smith’s adaptation of Gogol as “something to chew on, grapple with, dissect even as it proves consistently elusive.” Having received its previews at the Gate, those who missed the show’s run at the Fringe will now be able to arrive at their own verdict on this “bubbling, risky concoction” and its “accessible, vital commentary.”

You can buy tickets for Diary Of A Madman here. 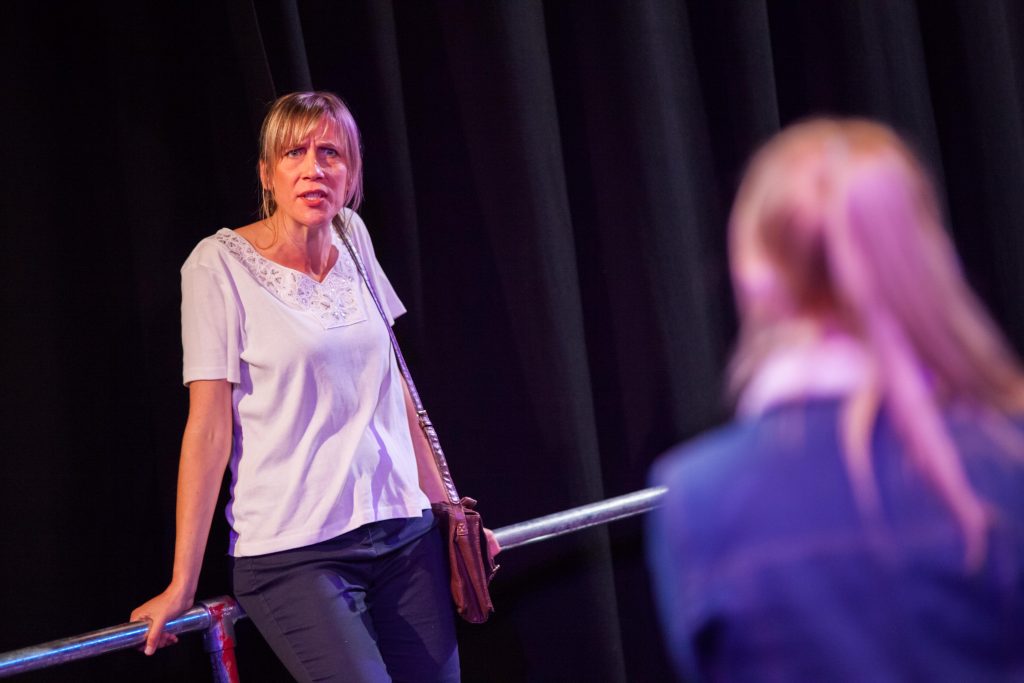 Theatre Bubble: What can you tell us about Gogol’s classic short story?
Deborah Arnott: Gogol’s short story tells the tale of a frustrated, socially isolated man who aspires to be promoted from his menial job as a clerk and be accepted by the ‘elite.’ We see him obsess about his peers and those of higher rank. He yearns after the daughter of his director and descends into paranoia, delusions, and ideas of grandeur.

TB: Has Al Smith’s re-envisioning changed any of the dynamics of this story?
DA: Al Smith has stayed loyal to themes within the book including anxieties around social standing and job security, the decline of a man’s mental health and how that affects those around him. Humour, delusions and dogs also play a strong role as they do in the original!

TB: What in particular is highlighted by the play being set in Scotland?
DA: The play is set in present day Scotland so politics play a very relevant role in the production, but so do local traditions, dialect, family dynamics and banter. The surrounding landscape where the play is set also has a strong impact on the characters of the play.

TB: What’s been your favourite role in your career so far?
DA: I haven’t had a favourite character as such – they each bring their own challenges and satisfaction. Highlights have been definitely playing the Sergeant in The Caucasian Chalk Circle at The Lyceum and Shula in Tracks of the Winter Bear at The Traverse.

TB: How would you say you’ve developed as an actor throughout your career on stage and on screen?
DA: Like any job you want to succeed and do well in, you have to work hard, work at it, keep looking into the script, be open to ideas, be respectful of others, listen and be confident to speak your own thoughts and ideas. In every job there are new things to learn and discover.