Review of: A Lovely Sunday For Creve Coeur at the Print Room at the Coronet

Produced by:
Print Room at the Coronet

Though by no means having the same teeth as the likes of Streetcar or Cat on the Hot Tin Roof, Lovely Sunday is consistent in thematic tone

Often when notable playwrights have ‘lesser-known’ works, it seems to be for a good reason – the play in question may not live up to the calibre of other parts of an oeuvre (a recent example may be J.B.Priestley’s The Roundabout at the Park). These are plays that may have fallen by the wayside because of their lack of sophistication, perhaps a stepping stone to even more vibrant material (few remember No Villian when listing Arthur Miller plays for instance) or produced by the writer when they seem to be passed their prime. As such, there is always a sense of underlying scepticism when one encounters plays like Tennessee Williams’ A Lovely Sunday for Creve Couer, here revived by the Print Room at the Coronet. A scepticism here entirely unfounded – this is a charming, well-constructed and lusciously put together piece of work that, while adapting what is by no means Williams’ most exciting script, does a full justice to the show and its thematic undertones.

The unique nature of the Coronet’s former echoes of grandeur blend seamlessly into the wonderful set design overseen by Fotini Dimou – a rich pallet of warm red wallpaper, soaked with muddy hues and entirely outdated lampshades. The use of gauze is equally fascinating – opening up the small bedroom space, often betraying the isolation and personal moments of central character Dorothea. 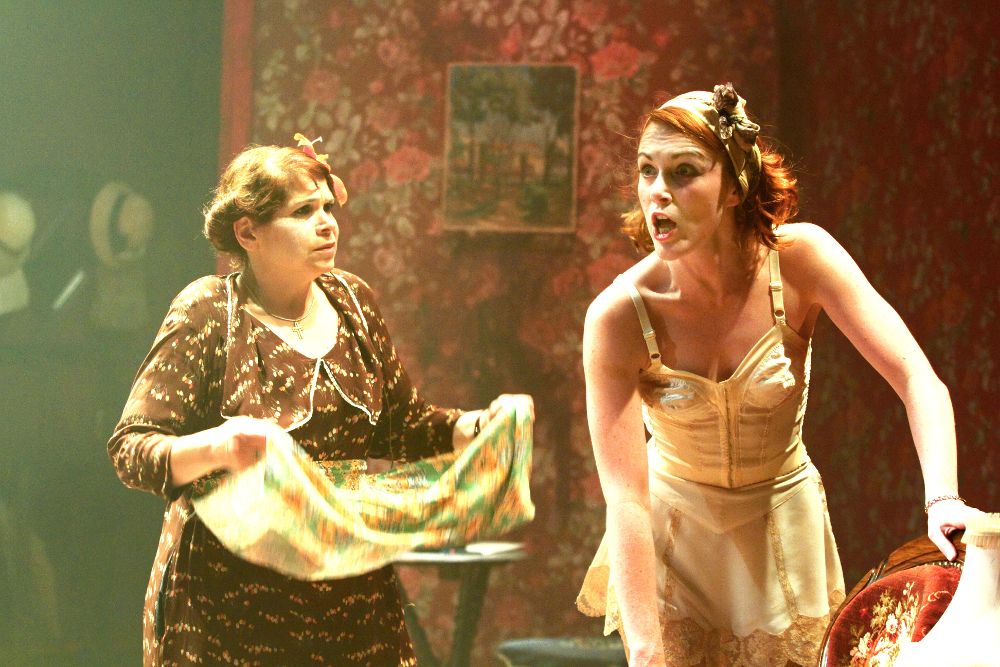 Though by no means having the same teeth as the likes of Streetcar or Cat on the Hot Tin Roof, Lovely Sunday is consistent in thematic tone, filled with jilted lovers, awkward romances, consistent class based tension, and a desire to climb a social ladder that may or may not be all that vital. Smatterings of discussion on national identity and second generation immigration also feature at sporadic intervals.

Here we find ourselves in St. Louis in the mid-1930s, firmly placed in the apartment of Dorothea and Bodey (Laura Rogers and Debbie Chazen). As events proceed, we are witness to the underlying tensions in the household – Dorothea’s need for attention from her beau, while Bodey is keen to set up her flatmate with her (gradually) reforming brother. In terms of plot sequences there is nothing with the same gripping urgency as many of Williams’ other plays, but the text nevertheless permeates the requisite timbre to maintain a level of interest in the overall outcomes of the characters.

Director Michael Oakley has done a superb job in keeping this a taut, slick production that rarely loses its sense of urgency and vibrancy. Laura Rogers’ tortured Dorothea may certainly draw the comparisons with the various iterations of Blanche DuBois that have existed over the decades, but she brings a delicate poise and a sense of resolve that differentiates her from that most famous of roles. Beyond this was a solid all-female ensemble that never eased up, fabricating an exciting rendition and a St. Louis both immersive and almost tangible (helped perhaps by the intense heat of the Print Room in the summer).

A smattering of laughs and some consistent performances all round make this a charming piece – a rare reproduction of what could certainly be considered an underappreciated gem.