Whilst performers and punters alike flock North for the Edinburgh Fringe, London theatre bids farewell with a bang to one of its own true originals. Finger In The Pie, the award winning physical theatre and cabaret company, is to present its swansong in Wünderfinger – an anarchic explosion of badly behaved late night cabaret led by the infamous Baby Lame, winner of the Judge’s Award for Cabaret at Mimetic Festival 2014. Theatre Bubble caught up with Artistic Director Alex Parsonage and Executive Director Flavia Fraser-Cameron to talk about their own futures as well as that of the UK Theatre Industry. 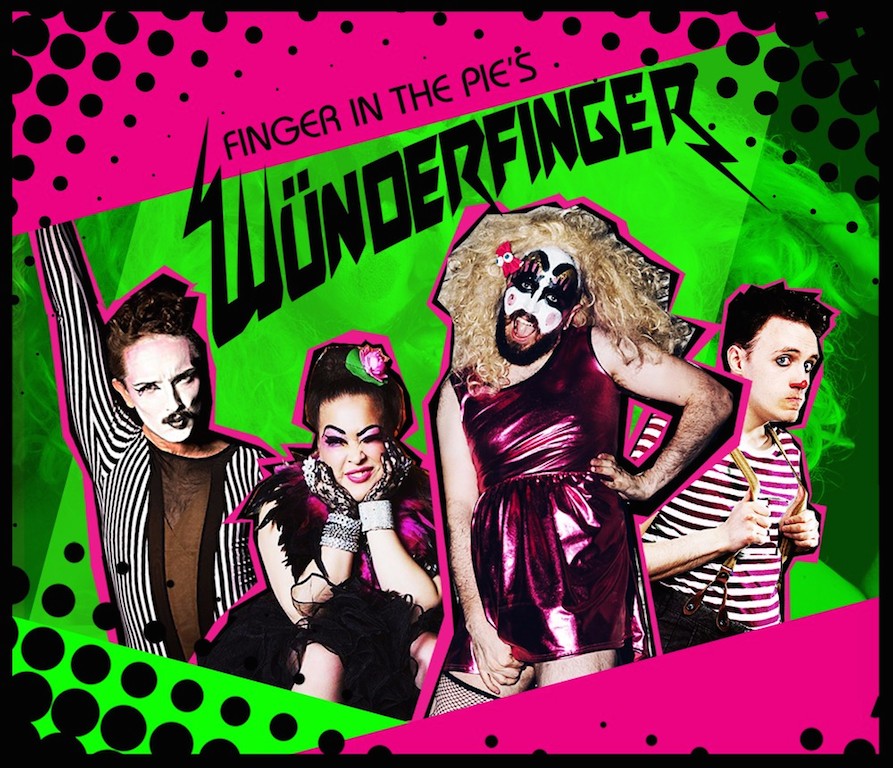 Theatre Bubble: After 12 years, why is time to say goodbye to Finger in the Pie?
Alex Parsonage: We’ve just had an exceptional 12 months of artistic success – including performances in the Soho Theatre, The Round House, on the South Bank. We’ve worked internationally in Berlin and Barcelona. We’ve directed an award winning clown show that toured the Canadian Fringe Festivals and we’re finishing off the summer with our largest clown show to date – Wünderfinger at the London Wonderground. On the flip side we’ve been turned down for three large funding bids, and struggled to make ends meet. We managed it, but it was harder this year than last. And last year was harder than the year before. And I guess when we both sat down and looked at it we couldn’t see any reason that next year won’t be harder still. After 12 years we decided we’d rather end on a high.

Flavia Fraser-Cameron: As Alex says, we are in a very tough climate for small to mid scale production companies such as Finger in the Pie. Plus I have a child and I got old ;)

TB: What has been the greatest change you have seen in the Theatre Industry within this time?
AP: Money. When we started out 12 years ago it felt like as long as you worked hard and created great artistically credible theatre there was a progression in place that would mean one day you’d be able to get the funding necessary to live, if not comfortably, then at least feasibly from your work. As budgets have been progressively cut year on year – a process that started back in 2006 well before the Great Crash, when the then Labour government cynically combined the departments of sport and culture so they could siphon money from the culture budget to subsidise the Olympics. It was downhill from there, with the Crash and austerity that followed just entrenching and continuing a process that had already begun.

FFC: I’d also say audiences are looking for something different these days – 12 years ago a new devised piece of theatre, or piece of new writing were a desirable way to spend an evening. Constraints on time from working longer hours, less money for leisure activities and seeing friends less often has seen a rise in experiential theatre like Secret Cinema and Punch Drunk. A show during which you can talk to your friends, really share the experiences and be playful throughout. Sitting in a theatre, end on, looking at a stage and receiving a play in the dark feels archaic at the moment.

TB: What have been the highs and lows of your time producing top theatre and cabaret in the capital?
AP: I think the closing of Madame JoJo’s was probably the lowest point. I campaigned vigorously to keep it open – but ultimately no one seems to be able to stand in the way of the power and money wielded by the property developers who are tearing up our city. I remember at the time someone asking me if I thought that was the beginning of the end for Soho. I worried then, and I still do, that it wasn’t the beginning of the end, it was the end. It’s very sad what’s happened to our city in the last 10 years. On the other hand the highs have been numerous. Standing at the back of a crowded room watching an audience absorbed in a live show and knowing that you’re responsible for everything you can see. There’s no feeling that can top that. All of my best memories, from leading a post show Q&A with an audience so moved they’re still in floods of tears, to sitting in the back row of a sold out venue as the audience give a standing ovation, to seeing a room full of drunken west end party goers absolutely absorbed in a beautiful piece of silent clown: they all boil down to the same thing. Knowing that we have been privileged enough to create work that has moved people.

TB: Finger in the Pie have discovered some of London’s hottest new talent over the years – Dr Brown, Myra Dubois, etc – what’s the secret to your success?
AP: Saying yes. It’s the key to artistic success. Saying yes to opportunities, saying yes to other people’s ideas, and saying yes when a completely unknown performer with no track record asks you to give them their first opportunity.

FFC: Alex has a good eye too, he met Pi the Mime during the Mimetic festival 2013, when Pi was fairly fresh out of drama school, full of creativity and enthusiasm but not sure what to do next. Alex told him outright he’d be brilliant in cabaret and to come and do 10mins of his show at Madam Jojos, and that was the start of something really special. We didn’t really have mime on the cabaret scene and suddenly there was this disarmingly sexy white face classical mime, in a waspie and suspenders! When we made our first wishlist of people to ask to be in Wünderfinger the number of people we loved and have watched grow would have filled 10 shows.

TB: What can audiences expect from Wünderfinger? Or should we throw all expectations out of the window?
AP: Haha…. right up until the end of the first performance even I wasn’t sure what to expect! It’s one of the strongest ensembles I’ve ever worked with. Everyone involved is a fantastically talented clown or performer. But with that much talent and personality anything could happen. I think the best bet is buy a ticket and see for yourself!

FFC: I can’t tell you how blown away by the work of our team I am. I’m 100 shades of proud. But to describe the show… gosh… it’s all things! In your face, sexy, surreal, terrifying, heartbreaking, beautiful, and ends like Eurovision on acid.

TB: What does the future hold for you both?
AP: I’m currently doing a placement in a TV company. I’ve always had a passion for developing new ideas and crafting narratives. I’m now seeing where else other than theatre I can apply those skills. I’ve set myself the challenge of trying at least four different careers before the year is out. Having worked in theatre for 12 years I’m ready for the next challenge. Though I’m sure theatre will call me back eventually.

FFC: I was very lucky to be snaffled up by theatre and live arts PR company Mobius Industries almost as soon as I mentioned I was going to be back in the job market. I’ve been a publicist on and off for years and even worked at Mobius back in 2009,  so it’s a bit like a homecoming. Plus my time at Finger in the Pie has beefed up my cabaret knowledge so guess who was immediately put on The Ruby Dolls tour campaign for this Autumn?  I’m going to miss working with Alex terribly though, we’ve worked on and off together since about 2008, he’s my brother from another mother (except we’re both too middle class to pull saying that out loud off).