Review of: The Collector

Produced by:
The Vaults

A claustrophobic psychological play that unfortunately steers just clear of the tense thriller it could have been.

Coming out of The Collector, having spent two and a half hours underground, I felt strangely off-kilter. I was uncomfortable, on edge, skittish, but most of all I felt extreme empathy with Miranda (Lily Loveless), our kidnapped protagonist. Kept in in the cellar by her captor/kidnapper/friend (his roles blur) Frederick (Daniel Portman), she begs him to let her go outside for fresh air. As trains echo over our heads, it is a request the audience can relate to. 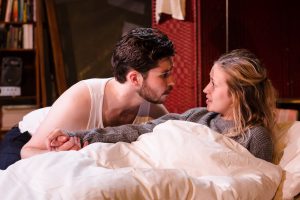 The story is adapted from a novel by John Fowles and follows Frederick, a butterfly collector and former job centre worker. When he wins the lottery, he is given the chance to pursue his dream of collecting his next catch, a beautiful arts student Miranda who he’s been stalking for years. He buys a country cottage and transforms the cellar into her soon-to-be bedroom; this is where the action of the play takes place.

It’s the perfect venue. The Vaults Theatre is converted from an abandoned archway under Waterloo, but it’s what Max Dorey, the set designer, has done with this unique space that makes it truly exceptional. His attention to the detail in creating the cellar is impressive from the stacked diet coke cans to lines of toothbrushes – all transporting you into the play. He adds sharp touches like the eerie tarpaulin coating the wall that could just as easily denote the scene of a crime. It is apt then that as Frederick begins his first monologue you gradually notice what looks like a body under the sheets. It reeks of threat as he states, “there are two sides to every story”.

The actors individually give very strong performances. Loveless’ upper middle class stuck up student adds much needed humour to certain situations and her counterpoint is equally strong as Portman portrays a man on the edge through small quirks of nervously shaking his hands and incessantly scraping his hair back alongside an imposing physicality. But, the play really shines in the artfully directed (by Joe Hufton) moments of interaction between our protagonists where they are one moment sharply rattling against each other and the next are staring in uncomfortable silence. The boundaries of their relationship are not clear cut and this poses the most interesting questions of the play about the lines of love and abuse

However, where the play falls short is the inability to maintain this underlying menacing atmosphere. This is perhaps the price of Mark Healy’s adaptation of the novel into a play, given his tendency to rely on numerous monologues that break the reality of the play without adding much; they veer into telling us what characters are thinking rather than showing. They break up the building tension. Sloppy technical aspects like the simple use of different spotlights across the stage as the characters supposedly walk around the house only add to this disjointing of natural interaction.

This claustrophobic psychological play unfortunately steers just clear of the tense thriller it could have been. But with great performances and moments of brilliance, it should not be missed.

The Collector will be continuing its run at The Vaults Theatre, Waterloo till 28th August at 19:30 Tuesday – Sunday. You can book your tickets from 0207 401 9603 or www.thevaults.london