Review of: Our Ladies of Perpetual Succour

While marred by sloppy structuring, this is a joyous, poignant, and irreverent look at a few days in the lives of six rural Scottish Catholic schoolgirls.

In the span of under two hours, the Dorfman Theatre’s large black box space transformed from a Catholic school’s choir rehearsal to imaginary girl rock band to deafening club, then, finally, to abandoned hillside.

The storytelling – punctuated by song – chronicled a group of small-town Scottish Catholic school girls, wanting to be free of a choir competition in order to go ‘mental’, get drunk, sleep around, and have a grand time. As their night goes on, however, the freedom they seek seems more and more at odds with their realities, where poverty, pregnancy, and illness threaten to cut off the futures they have imagined. It is a raucous, moving show featuring stunning performances, unfortunately hindered by flawed pacing. 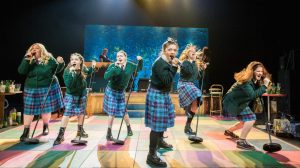 I’ll admit that I missed about a quarter of the dialogue due to the actors’ thick Scottish accents falling on my untrained American ears. However, I personally did not mind and believe any less dramatic accent would have done the piece and the irreverent, loud, glorious characters a disservice. Most importantly, however, every song was clear, dynamic, and beautifully recognisable yet original envisionings of classics. Every cast member can sing Bach and Bartok like an angel and then immediately belt pieces by Electronic Light Orchestra. Most importantly, every song furthers the story, heightening the poignancy of the play’s progression.

The actresses each portrayed one of the six schoolgirls, though one or two at a time would occasionally step out into another role; with a simple change of physicality they became a person the other students interact with during their exploits. While the entire cast delivers a strong, well-defined performance, special mention must go to Dawn Sievewright as Fionnula and Karen Fishwick as Kay for their exceptionally well-drawn portrayals of the school bad girl and the uni-bound student with a secret.

As joyous, riotous, and poignant as the plot is, however, it becomes mired in a clumsy, over-long storytelling structure. Even though it was only 105 minutes, the lack of intermission and of clear driving action meant that the dramatic climax was underwhelming. Very little distinguished it from the rest of the plot and the audience was losing focus by the end with no break given. Additionally, while new character information is revealed at each point of the girls’ nocturnal exploits, nothing ‘new’ happens after the first forty-five minutes. Even if it is a new bar, a new shag, or a new drink, after the seventh such the plot feels forced and repetitive. The piece would either benefit from some restructuring – a clean ending after the choir concert (which the piece seemed to be building up to before it decided it was not) would make the most sense. These quibbles aside, the outstanding music and the performers’ infectious energy made the evening an enjoyable one.

While Our Ladies of Perpetual Succour is not perfect, it is a delight see such a display of enthusiasm, unbridled vulgarity, and boundless musical talent on stage. While there may be better productions on the West End this summer and autumn, it will be hard to find a more exciting synthesis of rock music and personal drama.

Our Ladies of Perpetual Succour plays at the National Theatre’s Dorfman Theatre until 1st October 2016. Performances are at 8pm Monday-Thursday, 5.30pm and 9pm on Friday and Saturday, and tickets cost £15-45.