Review of: Mr Jordan's Funeral at the Etcetera Theatre

Apiece of physical theatre that entertains and challenges in equal measures.

This theatre experience from Foxtale performance arts group was billed, among other things, as ‘sincere’ and it truly feels that way – the devising performers are an eclectic bunch – Maria Minchillo, Hannah Newman, Emilia Olandi, Elena Skreka, Judith Vivas and Lucy White.

As the title suggests, the show explores and devises, in the most original way, the funeral of a Mr. Jordan. This male figure never appears other than we can learn of him through the effect of their performances; at once tender, sexual, aggressive, vulnerable or challenging. Mr. Jordan seems to have a lot to answer for.

The black box performance space was littered with an array of random, colourful garments that were savagely attacked, as each performer sought some kind of identity or emotional attitude through the envelopment of the costumes. It is a sensory piece with the narrative driven by the visuals rather than the dialogue. We get the idea that control might be an ideal but it is difficult to deliver when we feel confused, sexual, insecure, dominated or excluded. 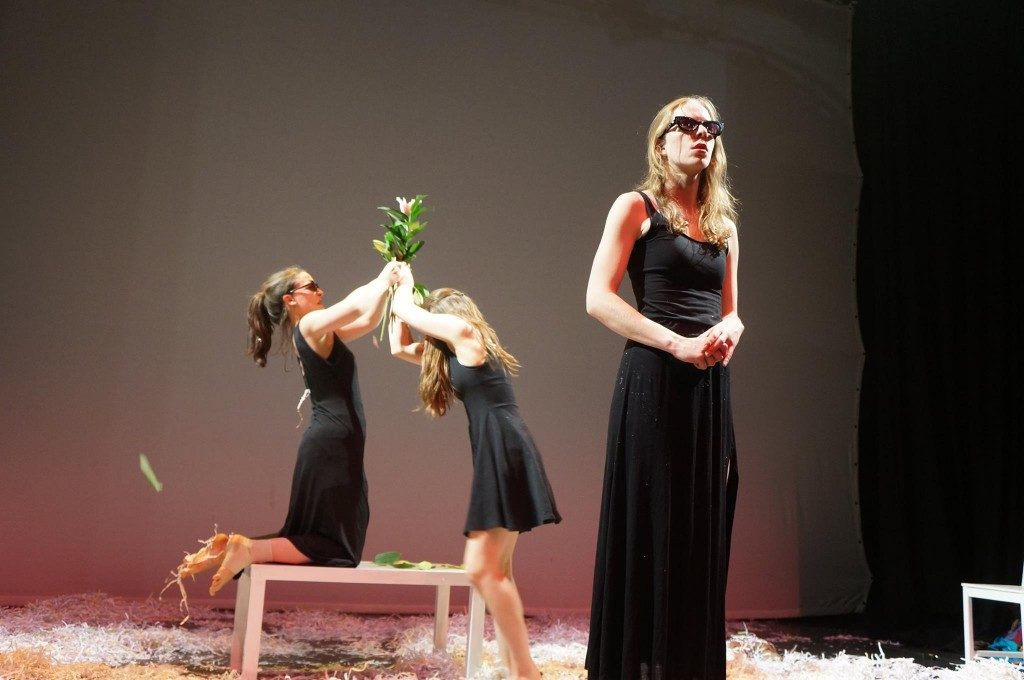 The physical expressions were tender or contorted and all the performers were committed and intense in their delivery. At times changes in expressions would have given us clearer direction as to what they were feeling, as the stark emotionless stare can wane somewhat. However, these energetic performances were sustained with intent and the physicality of the piece and sensory atmosphere was enthralling, though at times not always explainable. This may be justified – sometimes we do have feelings that we search to explain and perhaps our best shot is to strike out or shout or indeed moan. Rules are there to be broken especially at a time of mourning where everyone is recalibrating emotionally.

The sensory side of the performance, with clanking cups, strawberries crushed with juices pungent, wilted lilies or the dust from the shredded paper making people sneeze, all served to engage the audience in a visceral sense. Along with a varied musical sound track we could certainly be confused or amazed, but we were not disengaged.

Speeches of love affairs or of beaches and seagulls were powerful and were made so by the ensemble commitment to the piece and to each other. Foxtale is a group of international actresses who are pushing at the received notion of theatre, twisting narratives with their energy and imagination; their development will be interesting to watch as they work with more conventional material.