Review of: Measure for Measure at the Edinburgh International Festival

Produced by:
Cheek By Jowl

Watching Cheek by Jowl at work remains, perhaps unsurprisingly, inspiring and exciting. Measure for Measure is a stunning example of how Shakespeare can still be exhilarating theatre.

Measure for Measure is a notoriously indefinable Shakespeare. Trapped halfway between comedy and tragedy, only a production that refuses to prioritise either of these could do justice to the play. Cheek by Jowl’s version, currently touring, neatly strikes up this balance, never allowing the audience to settle in the uncomfortable, dictatorship world they create on stage. The translation of Shakespeare into Russian suits their interpretation very well – sharp Slavic syllables paint the fictional soviet dictatorship onstage perfectly.

Director Declan Donnellan must, firstly, be commended for the cohesion of the play. Despite cuts, some major in the Edinburgh version, every narrative twist effortlessly leads into the next. Up until the final scenes, these transitions are created by keeping the ensemble onstage at all times, silent observers of every passage they’re not a part of. The watching-and-being-watched motif opens the show, with an entirely silent prologue showing the Duke’s motives for leaving Vienna. This was the first of a few stunning physical theatre sequences that added to the play without detracting from the words. Individual performances also shone – Alexander Arsentyev’s Duke was funny, genuine, and a charismatic dictator throughout the show. Anna Khalilulina as Isabella treaded the delicate line between being truly earnest and being irritating with great success. 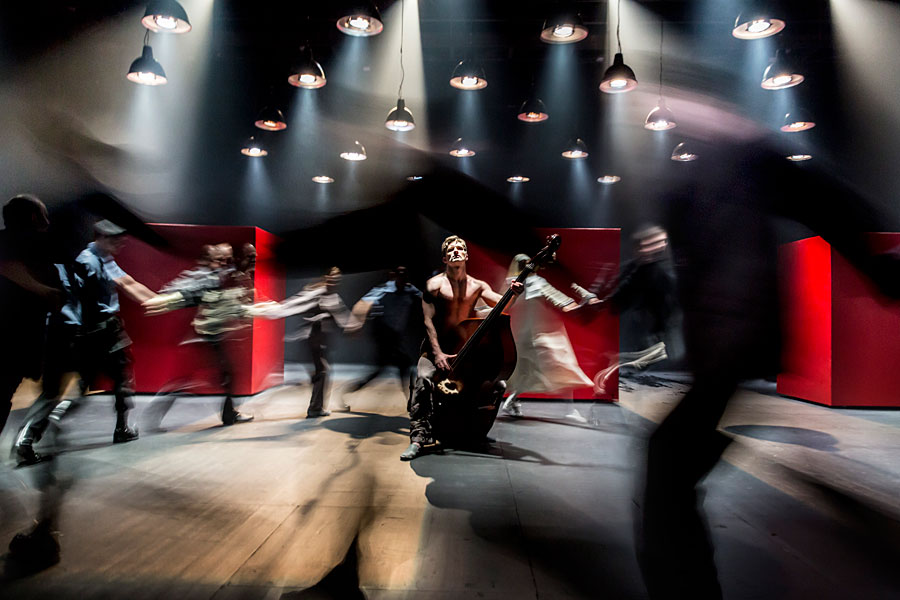 The set was an incredibly innovative use of the theatre, using a number of techniques to define and redefine the space that the audience could see and the actors could use. Harsh overhead lights and moveable red blocks initially enclosed the stage to perhaps a quarter of its true size. Later the entire bared back stage was revealed, and then the auditorium itself also became a part of the performance. At a couple of moments during the show, the red blocks spun to reveal small, hollowed-out mini spaces, where various moments from scenes were staged. This dynamic treatment of space constantly reminded the audience of the limitations and openness of every scene. We were always aware that everything onstage was simultaneously public and private, emphasising the ensembles Cheek by Jowl took the juxtapositions in Shakespeare’s text, and, rather than hiding them, brought them to the fore.

Watching Cheek by Jowl at work remains, perhaps unsurprisingly, inspiring and exciting. Measure for Measure is a stunning example of how Shakespeare can still be exhilarating theatre.