A great new production for the street dance and hipster generations, that gives renewed relevance and accessibility for the modern audience. This is true rock opera and a great reminder that Andrew Lloyd Webber had a creative edge and originality - at least in 1970.

This is a Jesus Christ Superstar for the street dance and hipster generations. Director Timothy Sheader has done wonders in making this revival of Andrew Lloyd Webber and Tim Rice’s musical from 1970 both relevant and accessible for the modern audience. The use of a dystopian backdrop, with a set of rusting steel girders, together with the disciples, many of whom sport beards worth of Shoreditch High Street, clad largely in grey workout gear, fits well with a highly charged and energetically choreographed production which is playing to sell-out audiences in Regent’s Park. From the opening guitar riffs played on high with great power, we are swept into a series of memorable versions of the well known songs, with a background that becomes increasingly dark with oppressive heat as we move to Gethsemane.

The first half of the production really does rely on the strength of Anoushka Lucas as Mary and Tyrone Huntley as Judas. My reluctance to see recent productions of this musical has been driven by a feeling that no-one could come close to the original Mary, Yvonne Elliman’s, singing of her 3 key songs, but here Ms Lucas brought something new to the role and does not suffer by comparison. Similarly Mr Huntley’s vocal range and quality helps his songs to stand out, and the two of them can look forward to great careers in musical theatre. 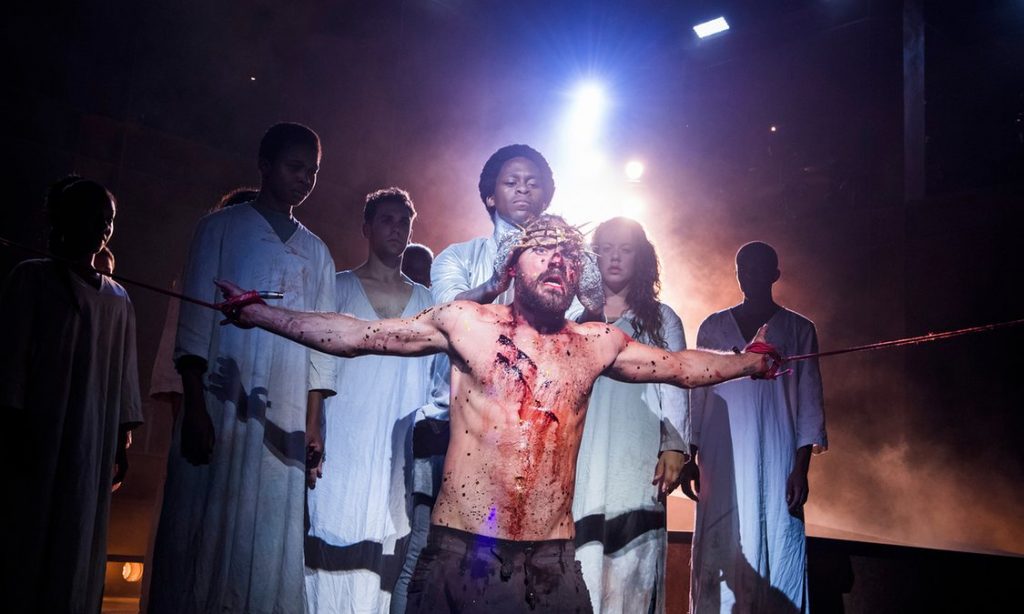 For Declan Bennett as Jesus Christ it is perhaps the theatricality that is missing. His background as a member of a band is apparent in the early numbers – great singing but little interaction. However, this may be a little harsh as his songs are not as strong as those for the others – it seems that the devil really does get the best tunes – and the role is one of almost consistent tortured angst, giving little respite for either him or the audience. Further, the second half, when he really starts to suffer from betrayal and torture, does allow him to show that he can act, and his delivery of Gethsemane (I Only Want to Say) certainly makes him a worthy fellow cast member.

The rest of the cast is similarly impressive, with Phil King singing and playing well as Peter, David Thaxton as an imposing Pontius Pilate and Peter Caulfield as a gloriously camp Herod. As ever on a glorious summer evening, the Open Air Theatre is the perfect setting for theatre of this kind and Tom Scutt’s design makes the very best of the environment. The show finishes soon (on the 27th August) so one hopes that there will be a move to move it elsewhere. The impression that I was left with was that this was a true rock opera, not one of the saccharine musicals that have plagued the West End for years, and that Andrew Lloyd Webber, at that time, really did have some cutting edge and creativity to his music.