We first saw Forward Arena’s work when they previewed a ten minute excerpt of Callisto: A Queer Epic at the Les Enfants Terribles Award Showcase – and they have been on Theatre Bubble’s radar since. This Edinburgh Fringe they present the full play, a constellation of four queer stories scattered across time and space: from a London opera house in 1675 to a research lab on the moon in 2223. They open today at the Pleasance Dome and perform until the 29th August, with a break on the 15th. 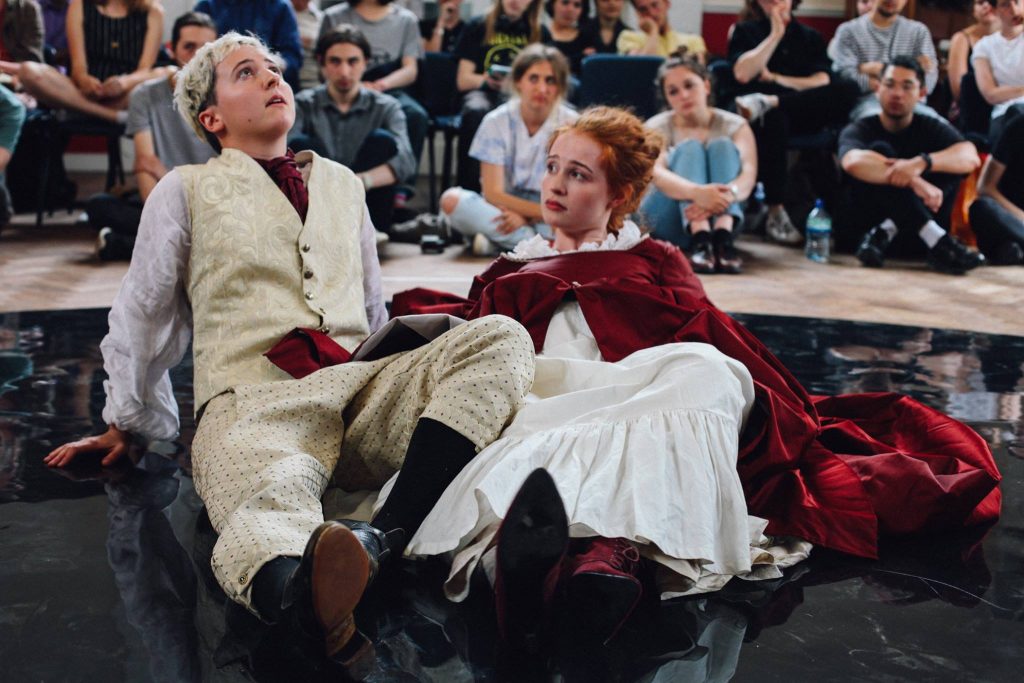 Theatre Bubble: Calisto is described as a Queer Epic – can you tell us more about what this description means?
Forward Arena: The phrase ‘queer epic’ first came about as a simple way to describe the sheer scope of the stories we wanted to tell. What unites the four stories of Callisto is there queerness but, when united, we hope the piece becomes huge, monumental and ‘epic’. We wanted to bring queerness out of a quiet, private, domestic setting and loudly place it front-and-centre of significant historical moments. The phrase is also useful in that it gestures towards our hope that stories like these can unsteady the hyper-masculine, violent, and triumphal perspective that so often underpins notions of epic.

TB: What are you hoping to achieve through the juxtaposition of these different stories onstage?
FA: First of all, we really hope that watching four stories unfold in their own distinct language, costume, and tone will, if nothing else, be entertaining. Callisto doesn’t waste a minute on anything other than storytelling at a breakneck pace – and between the 1670s, the 1930s, the 1970s, and the 2220s, we hope there’s something for everyone. Secondly, the four stories can only together open questions about their shared subject matters — queer experience, identity as a performance, the gap between our public and private selves. We want these to stand-out as recurrent concerns that echo across time, place and class. And thirdly, we have intentionally eschewed a present-day setting because we want to look back at the past and forward to the future in order to overturn the idea that the present day has any special purchase on enlightened attitudes to questions of queerness.

TB: Do you believe the Fringe is too financially inaccessible for emerging theatre practitioners?
FA: Increasingly, this is the case and soon it may well be entirely inaccessible. We have relied upon the overwhelming generosity of over 100 backers in a massive Kickstarter campaign to get us here – without their help, the Fringe would’ve been beyond us.

TB: What are looking forward to most about the Fringe?
FTA We can’t wait to see the work of other companies up here this year, particularly those who are also exploring queer identities in their work.