Celebrated puppetry company Smoking Apples, co-creators of last year’s Fringe success CELL, return to the Underbelly with their new show In Our Hands. In Our Hands is a human story within the trawler fishing industry as it struggles to adapt in a changing world. It performs at the Underbelly, Cowgate from the 4th – 28th August. 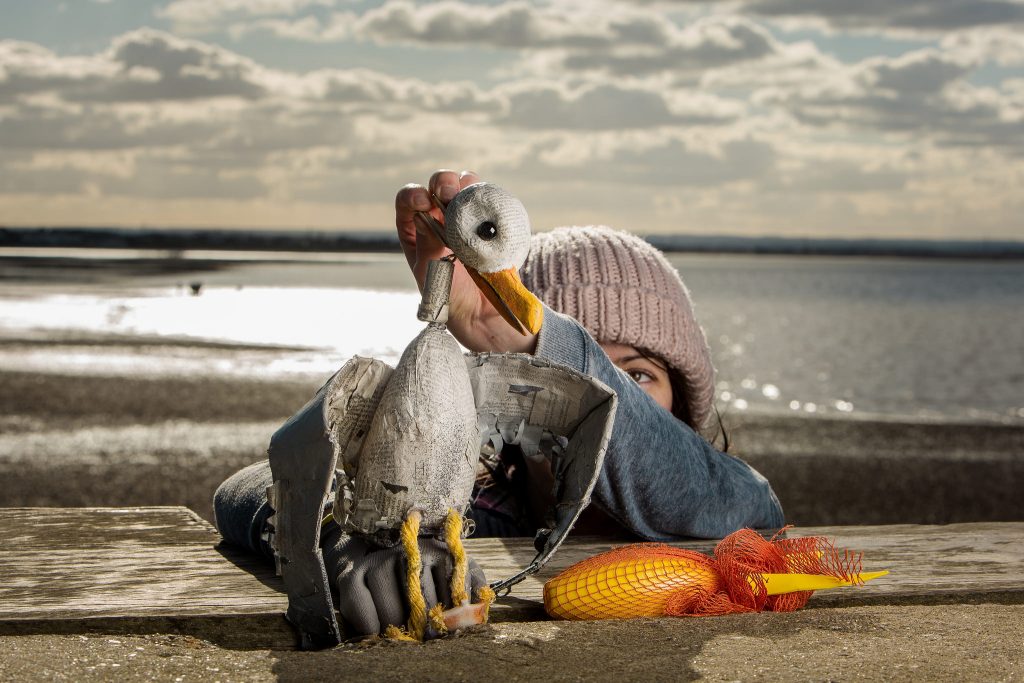 Theatre Bubble: Last year, you presented CELL – a show using puppetry to explore the effects motor neurone disease. What made you choose the subject matter for In Our Hands?
Molly Freeman: We often choose quite seemingly mundane subject matter to make shows about – but that’s more because we can see the potential in how we can present it visually and the human stories behind them. That and we’re quite a geeky bunch!
Hattie Thomas: We also knew that with this show we wanted to work with a larger cast to see what new possibilities this could bring to our puppetry so we invited our long term associate artists, Luke and George, to join us. We got together as a group and spent a day talking about subject matter that interests us. Eventually we realised that none of them were quite right, so we looked at the common denominators of our ideas, these included family, trade and politics.
MF: One of the group was working at an aquarium at the time and had been learning a lot about the treatment of fish, another was a vegetarian who stopped eating meat because of the way the animals are treated, conversely another grew up on a farm and understood the process of breeding animals for food. We became intrigued by our differing opinions on the subject, and all of us were interested to find out more. We liked the idea of fishing being a trade and a craft and felt it had some similarities to storytelling and puppetry in this way, so we decided this would be the focus of our research for starting a new show.

TB: How do you create your shows?
HT: We like to rehearse for around a week at a time so that we can get lots done but also have the mental space to go away and think about the work between rehearsals.
MF: We develop our shows in London and outside of London. With In Our Hands, we spent a lot of time in Cornwall meeting fisherman and taking inspiration from their stories. When it comes to the rehearsal process, we tend to chuck out ideas and just get on and try them! We work very visually so our rehearsal process is usually a very messy one with makeshift props everywhere, a building station in one corner and scrawled ideas on paper all over the walls!
HT: We also have a much bigger creative team than just the cast in the room which really helps to bring everything together. We work with a brilliant dramaturg, a lighting designer and a composer and all of these things really add to personality of the show. We’re in charge essentially but it’s great to work with people who specialise in certain fields but understand the artistic intentions of the show.

TB: What is the motivation for the prominence of puppetry in your work?
HT: We use puppetry to highlight characters and add another dimension to their story, and if there wasn’t a reason for a character to be portrayed as a puppet then we wouldn’t have one in the show. Alf is the main character of In Our Hands and it seemed like a natural choice to create a puppet to represent him. As a fisherman, Alf’s choices are limited by the turn of the tide, changes in legislation and public demand, directly effecting his work. As a father, he is torn between trying to stay in touch with his son and trying to maintain his business. We chose to represent Alf with a head, two separate hands, and no body, to show him being manipulated by his circumstances and by the puppeteers, furthermore we show him physically and emotionally in pieces over the difficulties and loss he faces.
MF: Trawler fishermen are also really efficient and literally undertake no superfluous movement so it made sense that we only use the parts of Alf’s body that he really needs. There is nothing extra.

TB: Your shows blend puppet characters and characters portrayed by humans. What motivates this choice?
HF: We trained in puppetry and physical theatre and like the challenge of combining the two on stage. It can be difficult to balance the focus between the two but that’s exciting for us work on. By having some characters as puppets and some as people, we also open audiences up to another level of imagination and suspension of disbelief. When we perform with just actors, we are asking the audience to believe we are people we are not, and to accept that for the duration of the show. When we bring puppets into the equation, we ask them to accept an inanimate object as a creature with a life, feelings, family, ambitions, we push them to open up their imaginations and come into the world of the story. Both have their advantages, so we figured, why not use both.

TB: What are you looking forward to most about the Edinburgh Fringe?
MF: The Edinburgh is a ferocious beast and one that fills us with dread and delight all in the same moment. There really is nothing else like it. The best thing about the Fringe, I think, is the luxury of having a huge diversity of art on your doorstep, from all over the world, by so many different people, with all kinds of different life experiences. We really can’t wait to meet all of these people and see as many shows as possible whilst playing a show that we love and hope audiences will do too.

Buy tickets for In Our Hands here.