Review of: The Living Room

Produced by:
Workcenter of Jerzy Grotowski and Thomas Richards

A close collaborator of Grotowski offers a contemplative actor-centric performance event that reaches towards inspiring a heightened perception and presence in its audience. A unique but not unmissable experience.

The Living Room is the first production from the Workcenter of Jerzy Grotowski and Thomas Richards at the Edinburgh Fringe this year, forming part of their Fringe Season in residence at Summerhall. Directed by Grotowski’s first student and then “essential collaborator” Thomas Richards (who is also a performer), The Living Room has toured to audiences throughout the world since 2008. It was first developed as a response to Richards’ dissatisfaction with conventional working spaces, and was created to be performed in the front room of a company member.

The show’s original setting is faithfully recreated in Summerhall’s Rose Bruford Upper Church, where assorted sofas and homeware encircle a central space, dotted with plates of macaroons and cakes. As the audience enters, the performers offer them refreshments. The atmosphere is gentle, relaxed, serene. The hospitality of our hosts is utterly unforced. 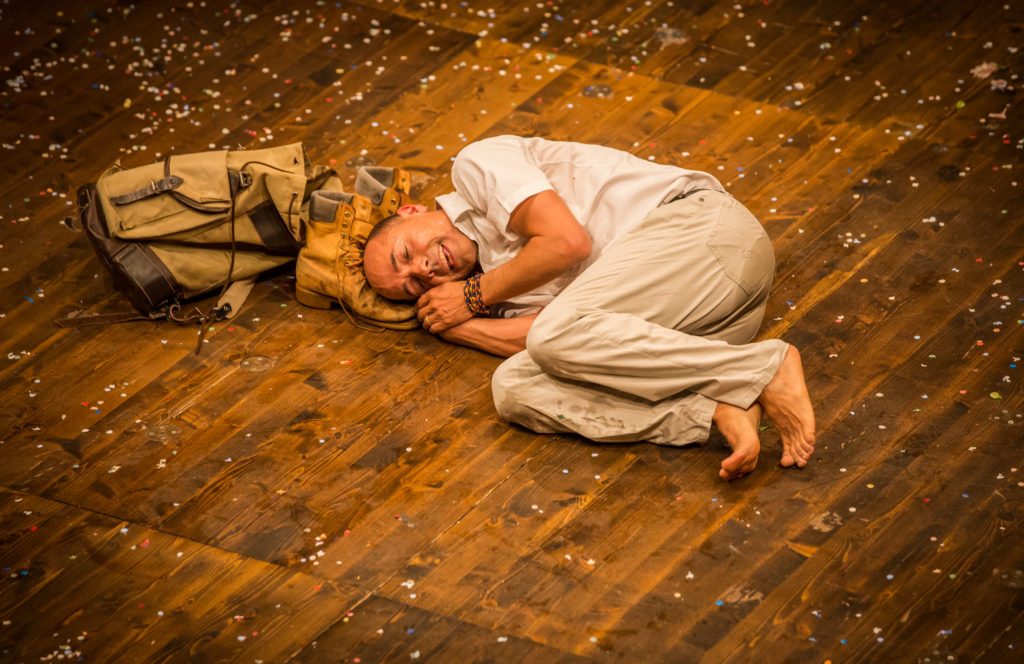 Thomas Richards in The Living Room

At the Edinburgh Fringe, time becomes a commodity. Nowhere else is our way of valuing time more explicit, and our immersion within this system of thought more total. At times watching The Living Room can feel like surfacing from this – at a relaxed one hour and thirty minutes long, the production takes its time to the extent that it negates our instinct to quantify the passing minutes. At one stage, the actors stand in utter silence as Richards distributes a divided birthday cake amongst the audience. Moving slowly might help make us more alive to how we experience the world.

For this, one feels, is what this production is reaching towards. There is no story, and little obvious connection between the events on stage. This is theatre at its most primitive – the harnessing of the relationship between the performers, and between them and their audience. We are welcomed. We are seated. We are offered cake. We are given pages of stimuli that are then explored repeatedly throughout the performance. One reads “look after the living as long as you are alive” – and we begin to consider the wider significance of the title of the piece. This is more a performance event than a play – an encounter between a group of people in a room, and an attempt to bring this encounter to life.

I would like to make an admission – I am unfamiliar with the work and research of Jerzy Grotowski. This review, I imagine, will therefore consequently inspire much eye-rolling from the initiated. My impression of the show’s intentions are drawn from what I have read of his work, from a conversation with one of the performers at the show’s close, and from the performance itself. It is difficult to review a piece of theatre that utterly eschews the performative; there are hallmarks here of Grotowski’s signature style which elsewhere might be described as distracting. The performers are only loosely connected to the activities they are engaged in, accompanying word and song with neutral, seemingly unrelated expression and gesture. The Living Room is an opus of Grotowski’s concept of Art as Vehicle, where performance structures enable focus on the artist’s self. Whether what we witness represents compassion or disregard for the audience is unclear and, I suspect, unimportant.

Anecdote: at the Fringe last year, at a grotesque outdoors promotional event I watched a group of spiritual singers perform. They sang in polyphony, holding crossed hands in a circle. And slowly, audience members joined them. I never saw their actual show – another sacrifice to our manic relationship to time at the Edinburgh Fringe – but that evening I felt I had witnessed something authentic and beautiful which stood in stark contrast to my self-serving and self-promotional compèring of the event. I think that The Living Room offers a similar experience, with a similar appeal. But one cannot review ideas and intentions alone. Moments are utterly enchanting – others are bewildering. The performers sing with a verve and harmony that offers more spiritual nourishment than any of the thousands of student acapella groups performing this year. The Living Room will not be for everybody – and for others it will be essential viewing.

I left the theatre, and laid down to sleep on the grass.