Review of: Last Dream (on Earth)

Produced by:
Kai Fischer, in association with National Theatre of Scotland

A beautiful, thoughtful show, touching on human endeavour and endurance 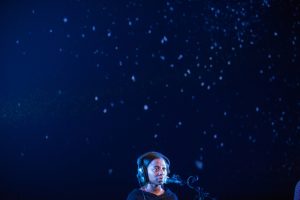 As soon as you put on your headphones in the corridor outside, you are drawn into the atmosphere of this beautiful, thoughtful show. You are hearing the cast play the ambient walk-in music live, and as your headphones cut out any other sound, the pre-show murmuring stops and you focus in on the unnaturally amplified tones.

This is two stories. The story of Yuri Gagarin and his team sending the first man into space, and the story of two unnamed African migrants trying to make it to Europe.

The first story is told mostly through the (presumably faithful) recordings of the radio transmissions between Gagrin and ground control. These are resurrected with aplomb by Michelle Cornelius, Kimisha Lewis and a wonderfully stoic Edward Nkom as Gagarin.

The second story of migration is obviously fictional, and is told by the many varied voices of the cast; all of whom apart from one of the musicians – Tyler Collins – appear to be of African descent. Coming together to tell a unifying, terrifying story of an arduous and unforgiving journey.

Both stories are told beautifully. The sound design is brilliant and the cast are very talented musicians. The various filters put on the radio transmissions sound incredibly realistic, and the spaceship sound effects – and silences – are thrilling.

This is an enjoyable albeit melancholic performance, though I’m not sure quite how the stories are intended to connect. Maybe it’s about human endurance. Maybe it’s about contrasting the highs and lows of human existence. Maybe it’s saying that to get to Europe as an illegal migrant is equally difficult, dangerous and lonely as going to space.

Either way, this piece will give you food for thought.