Review of: Counting Sheep at Summerhall 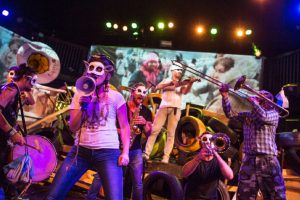 I love an immersive show.

Counting Sheep is an immersive show. Set amongst the political upheaval of the Ukrainian Revolution of 2014, Mark and Marichka Marczyk & the Lemon Bucket Orkestra go all-out to try and recreate the passion and confrontation of those crazy months. They feed us borscht and pierogi, they dance, we dance, they sing, we sing, they fight, we throw bricks at police, we mourn the dead. It’s a party, it’s a wake. It’s wonderful.

It’s 75 minutes of breathless life, soundtracked by incredible live music from the Lemon Bucket Orkestra, and incredible a capella singing by the cast. Personally, I had little knowledge of the recent events in Ukraine, so it was also fairly eye-opening to see the footage – some from the news, lots from camera phones – of the riots and the battles with the police.

It’s naturally a messy show – the audience spend most of the time being herded around – ironically or not. And the party spirit maybe feels a little forced at times. But generally it rollicks along, driven by the incredible images on the giant screens.

Obviously you can’t feel like you were there. But Counting Sheep gives it a bloody good go. It’s a brilliant tribute to the fighters, the activists and the ordinary people who took to the streets in 2013 and 14. And it’s also a great night out.