A cheerful but slightly distant telling of a East London Jewish childhood - beware of the mop.

The set-up of Bubble Schmeisis one which is gaining in popularity throughout fringe theatre – a one-man or one-woman show exploring the performer’s childhood through flashbacks while also taking them on a story in the present. In this case, performer Nick Cassenbaum focussed on his Jewish heritage whilst narrating of his first trip to a Schwitz with his grandfather in East London – peppered with fruit genitals, a dripping mop, and my personal highlight of the show – two cheerfully sardonic musicians (Josh Middleton and Dan Gouly) on clarinet and guitar in the far corner. This inclusion of live music into the narrative action was an excellent decision, as this helped provide not only a fantastic base for some of the humorous moments, but helped transform what was a very plain lecture theatre into something much more magical, thereby truly cementing the aesthetic of the piece. 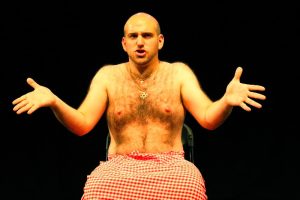 The contract that existed between Cassenbaum and audience was particularly interesting, as it was noticeable how hard all three performers worked to make the audience feel as if they were comfortable within the space of the performance. A truly brilliant example of this was a motive set up right at the very start of the show, and carried through to the very end – a simple inbreath and outbreath taken by both Cassenbaum and audience, accompanied by tuneless accordian bellows. Not only did this unify performer and spectators in letting them perform a very basic joint action together, but meant that we re-grounded ourselves after a narrative section took us away from the room in which we were sitting, allowing Cassenbaum to flow beautifully from more reflective episodes of his childhood to the ‘present’ narrative of his journey to and experiences in the Schwitz.

However, while acknowledging the existence of the audience worked beautifully at the start of the show, there were moments where this felt more of a hindrance than a help. The transition from adlib to scripted sections at the start of the piece were quite obvious, and while we soon relaxed into the style of the piece, the aforementioned spectator interaction meant that as an audience we were never truly permitted to be completely swallowed up in Cassenbaum’s world. Keeping the house lights almost constantly aglow meant that we were always reminded of who the performer and who the audience were, and were therefore curiously aware of what these roles implied and needed. This was used to Cassenbaum’s advantage in creating a bond between the two, however, fundamentally, this also highlighted the fact that this was, in fact, a performance – creating distance between the audience and story told. The most striking section for this reviewer was, in fact, the moment young Cassenbaum stood with his palms against the Wailing Wall with a spot on him and the rest of the house in darkness – finally allowing the audience to be lost in the onstage story.

Cassenbaum has managed to create a beautifully nuanced telling of his Jewish childhood, with some priceless moments of audience participation (you’ll have to go and see it to see what I mean), and it is only a shame that the way the audience were involved meant that we were more aware of the live performer in front of us instead of the story he was telling.