Review of: Yokai at Underbelly Cowgate

Produced by:
The Krumple

Yokai is a fantastically skilled, highly visual piece, but could do with some of the more decorative ideas being stripped away in order to focus on the story being told.

Yokai is a brilliantly chaotic conglomeration of a handful of bizarre tales, including a husband who grieves his wife for so long a branch starts growing out of his ear, a little girl who uses her pigtail to zip-wire down out of an apartment, and a fisherman who comes home one day with a gigantic fish stuck on his head. If it sounds confusing, that’s because it is – there is little to nothing connecting these vignettes apart from the ensemble of ‘yokai’ manipulating the action, playing out each twist and turn out with deft precision. Their ensemble work is highly skilled, and yet it does often feel like the story they are trying to tell is sometimes obscured by the highly stylised way they set about telling it. 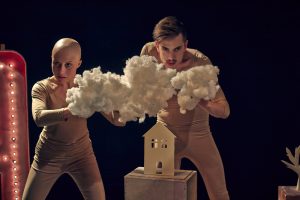 The aesthetic of the show itself was nothing short of beautiful – cotton-wool clouds, helicopter hairbands and large, floating leaves all adorn the stage within the first two minutes, creating a highly controlled and yet totally absorbing tableaux that harks back to toy towns created by kids. Every set piece, every prop was placed to clownishly impress, every single movement done deliberately with weight and importance in a way that made the changes of scene works of art in their own right. In fact, these scene changes often eclipsed the ‘scenes’ themselves, which were interestingly and beautifully done but felt like they had been created to fit the aesthetic rather than the aesthetic chosen to suit them – for example, birdhouses that twice inexplicably adorned the performers’ heads.

Another issue with practicalities of the aesthetic is that the stage ended up incredibly cluttered towards the end of the show with all the ‘extras’ brought in to the performance, and, in the already small stage of the Iron Belly, made the performance feel even more confined and chaotic. The switch from toy performers to live performers is already difficult at the start, since the scenes with live actors are nowhere near as clearly located as the toy tableaux – this happening with the floor strewn with glitter, leaves, pink flowers, snow and cotton wool meant that the last 15 minutes of the piece began to be very tricky to follow.

This is a comment which is curiously relevant throughout all the play, as the chosen stylistic choices often threaten to swamp the story The Krumple are trying to tell. Quite a few sequences felt like they were present because the performers wanted to show off their amazing skills, not because it added anything to the show they were telling. A prime example of this had to be a section where one male performer puppeteered another because apparently his legs weren’t working – a fantastic sequence that was beautifully done, but was absolutely not needed in the play as a whole. This needless abundance of ideas characterised the piece, and The Krumple might benefit from focusing on a few highly crafted stylizations instead of attempting to show the audience all of their talents at once.