The concept for this show – a scientific facility trying to teach dolphins to talk – is so utterly bizarre one might be forgiven for thinking the plot an elaborate fantasy; trying to be very ‘edgy’, very ‘fringe’. At least, this is what I was expecting while walking down Cowgate at 10am, grumbling at venues scheduling shows before midday and readying myself for some convoluted fantastical piece including talking dolphins. However, the resulting play completely stripped me of my cynicism regarding bizarre plot descriptions – Tank  is an utterly astounding and surprisingly heartbreaking look into the relationship between scientist and test animal in the Dolphin House experiments. 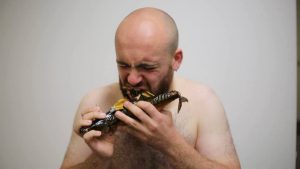 The brilliance of this piece lies in its simplicity – the set comprises of a table with two laptops, sound equipment and a water cooler; there are four actors, no costumes apart from a dolphin mask (of course) and papers – presumably with the transcripts of the lessons that were had between Peter the dolphin and Margaret, the researcher who ended up spending 10 weeks in a tank with him. The narration is clever and simple, imagining the story in a series of film shots. The actors disagree gently, create a sense of camaraderie between them and the audience, but, most importantly, are not in the slightest bit ‘performative’. They feel like scientists telling us a story; there is no baggy blocking, no awkward props, not a sign of that ‘actor voice’ that sometimes gets put on when walking onstage. The entire tale feels completely genuine, told by people who are know what they are talking about, and expect us to follow them. They talk of NASA, of funding, of Cold War troubles, all in a very matter-of-fact tone that implies they don’t feel the need to make this simpler or more visual for the audience to get it – they trust us to follow them.

And that we do – all the way to the lessons themselves, where Victoria Watson (playing Margaret) sits down opposite Joe Boylan (Peter, using a microphone to make dolphin noises) to attempt to teach him English. This is all there is, and yet we can feel her frustration as well as his – bizarre. The story takes a darker turn when Margaret suggests living with said dolphin in a submerged office for 10 week; Peter becomes aggressive, sexually aggravated, starts attacking her until she has to masturbate him in order to relieve his sexual tension. Completely not what I expected from a show about talking dolphins, but communicated so superbly that my only thought was ‘well, that seems like the only thing she could have done at that point’.

This was a piece which relied on the talent of its actors rather than bogging itself down with too many flips and tricks; it let the story breathe and speak for itself. Every line had a purpose, every prop and every action was there in order to narrate the tale – there was nothing which felt even the slightest bit self-indulgent. Tank was a wonder to behold, and my favourite show at the Edinburgh Fringe up til now. Flippin’ amazing.