Produced by:
Not Too Tame

Entering the Electric Circus nightclub and being greeted by a rather enthusiastic actor splashing UV paint on my cheeks, it is instantly very clear that this will be a rather unique Fringe experience. Sat around the edge of a club, nursing my cheeky 3pm G&T, I am simultaneously excited and worried about the approaching show – excited because every sign points towards the company actually knowing what they are doing, worried because so many of my immersive theatre experiences have started thus promisingly and consequently descended into chaos and confusion. Electric Circus does not, thankfully, take this route, and produces an extremely tight and thoughtful exploration of activist culture through a conglomeration of eight clashing personalities.

The dance sequences that were interspersed throughout the piece helped hold the individual monologues together, as well as marrying the naturalistic setting and acting styles with slightly more stylized and poetic writing. I was extremely surprised when it was revealed that the script was written by ‘The Company’ – it is exquisite, introducing just enough internal rhymes to give each monologue a lyrical feel, but not enough to cause problems with the immersive nature of the piece; it still felt ‘real’. Mixing this sort of intense naturalism with this relaxed stylisation is incredibly difficult to balance, and Electric Eden got it absolutely spot on. 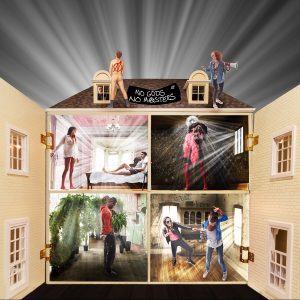 However, the stand-out aspect of this show was undoubtedly the fantastic performances put forward by each and every member of the cast. This sort of very naturalistic, immersive theatre requires a much more subtle kind of acting than when removed from the audience on a stage, which seemed almost second nature to the cast of Electric Eden. The one problem that arose was that of balance – some characters, like that of the agent hired by the corporation who was responsible for Eden’s death, were very obviously the ‘bad guy’, and while being given a really interesting monologue contrasting with the more socialist beliefs of the rest of the troupe, Hanna Jarman chose to play her in a very unsympathetic way. It would have perhaps been more interesting if the audience could have understood and had some empathy with her character, making the decision that Louise Haggerty’s character has to take less black-and-white.

My other issue with this piece is the way the plot was set up about being the death of an old busker due to a company’s rather aggressive security guards – but didn’t actually have anything to do with this at all. Sure, this provided a springboard from which to explore the characters ‘protesting’ his death, but it would have been nice to weave the story of Eden into their specific sections in a more relevant way. There was no sense of any kind of personality behind that name other than as a plot point – slightly disappointing when considering how strong the rest of the piece was. This meant that while the audience was intrigued with the personalities put forward by the cast, they had no emotional connection to the actual protest itself, which meant that the show was less hard-hitting than it could have been.