I came out of this show baffled, wondering how anyone could feasibly expect me to review the ferocious absurdist carnage that had just happened onstage. Yuri is a show which defies categorisation, hilariously funny in many sections, but also makes some bizarre decisions in terms of staging and stereotypes to poke fun at. 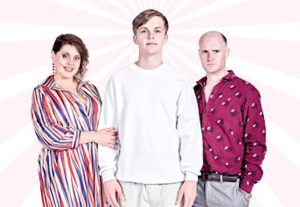 Carys Eleri and Ceri Murphy are excellent as dysfunctional couple Adele and Patrick, their chemistry and comic timing noticeable the moment they step onstage together. The ease with which these two casually broke and rebuilt the fourth wall as it suited them was truly something to be gaped at, as well as the sheer abundance of adlibs peppering each and every conversation. The pacing of the show was truly astounding, as every extreme mood swing as reaction somehow seemed to be justified in this weird world where silent 17 year-olds can be abducted from Lidl by a childless Welsh couple – and consequently learn to speak by eating Scrabble pieces.

However, it is with Yuri himself where my issues with this piece starts – as expected from a comedy which introduces a 17-year-old actor staring blankly into the middle distance and who doesn’t talk, this one went slightly too close to the line of making jokes about disabilities. The problem with trying to portray a comedically ableist and racist Welsh couple is that it is very difficult to draw the line between audience laughing at the old-fashioned views of the portrayed couple and the audience laughing alongside the production at these minorities. Yuri successfully managed to draw our attention to the ridiculousness of some rural xenophobia in vamping up the comedy of the couple’s opinion of Russia before very seriously pointing out the difficulties in talking about the Democratic Republic of Congo – however, it did not have the same tongue-in-cheek success with the ableism. It is clear that taking the piss out of disabled people is not what the company was intending, but did definitely come across as slightly uncomfortable in some sections. I wonder if it might have been more successful had Yuri not actually been an actor onstage, but purely left to our and the actors’ imagination – both Patrick and Adele narrate his every move anyway, and it would have emphasised his other-ness without having to resort to poking fun at disabled people.

This aspect of the piece was a shame, as the show was otherwise extremely tight, incredibly slick and managed to grab the audience from the very start – the chatting to the LD up in the tech desk during the show was an inspired decision. If you want a bit of 10pm general theatrical chaos, this is definitely the show for you.