Review of: The Marked

A aesthetically beautiful but slightly confused tale of alcoholism and homelessness

The sell-out success of Theatre Temoin’s last show, The Fantasist, necessarily mean expectations run extremely high for this year’s highly anticipated production. And while The Marked remains an interesting and well-thought out piece of theatre, it sadly does not pack the same punch of the group’s previous concoction. 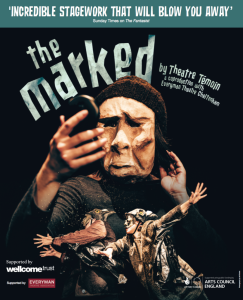 The Marked attempts to deal with many issues using its signature blend of puppetry, mask-work and live action, including homelessness, alcoholism and adults having to face their childhood fears. As I have come to expect from this company, the aesthetic of the puppetry and the masking is exquisite – here bin bags are manipulated into the action, forming flowing gowns, bubbling sea-like mounds of goo that spill out of bins and engulf entire people; skeletal pigeons flap cooing around the stage and alcoholism is represented by large, spindly black claws that appear on drinker’s hands. Where this production does, however, fall short, is in combining the real world Jack inhabits with the fantasy world of puppetry and masks that is only present in his mind.

Setting masks alongside live actors is difficult at the best of times, seeing as being aware of a ‘real’ person onstage necessarily also makes one more aware that the masked character is therefore ‘not real’. Lighting design could have helped in this regard – a much more stylized, non-naturalistic lighting setup for the fantasy scenes would have helped contrast with the naturalistic sequences, making both worlds more believable. This was successfully accomplished in the sound design, which was outstanding, but a lack of unity between sound effects and lighting meant that neither had the grand effect that could have been achieved. Instead, there was an awkward tension between the two, undermined the beauty of Sophie and Jack’s relationship as it was more associated with the pretend than the real.

Having said this, the fault lies only in the concept, not in the actual handling of the materials themselves. The puppetry was exquisite, and the mask-work beautifully subtle – I was fully expecting at least five actors to emerge from the wings at the end, and was so completely taken aback when realizing that the entirety of the previous hour had been orchestrated by only three. Tom Stacey and Dorie Kinnear (and probably the SM team as well) deserve raucous applause and probably quite a stiff drink after orchestrating what must have been an incredibly complex running list – without forgetting Samuel Fogell, of course, whose Jack was compellingly both older and younger than his years.

The Marked is indeed an aesthetically astounding experience, but doesn’t quite have the potency to hit the heart as strongly as The Fantasist did in 2012/13.